Several protests staged amid restrictions on assembly due to COVID-19 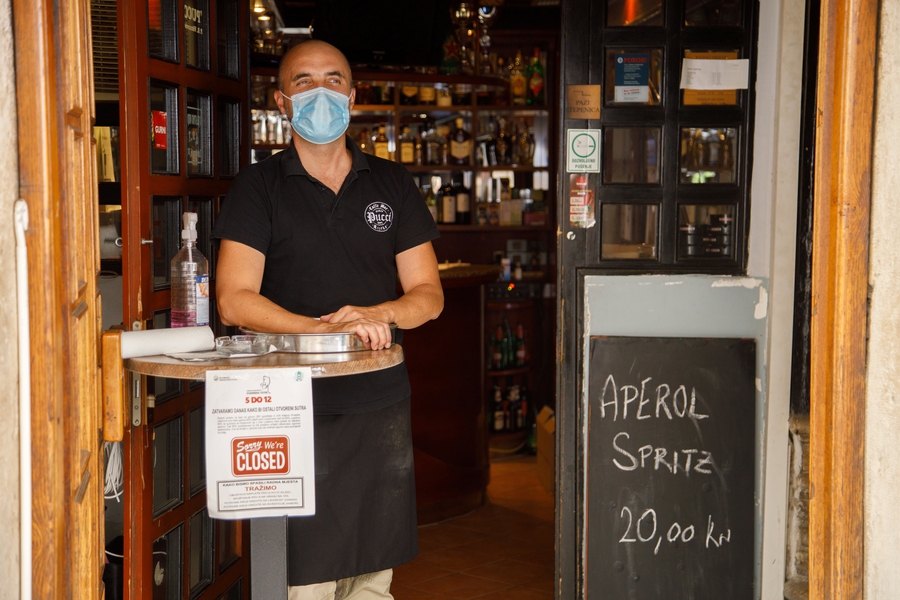 Business owners staged a protest over the impact of COVID-19 (REUTERS/Antonio Bronic via Gallo Images).

In a press release, the Croatian Constitutional Court defended its choice not to review the constitutionality of laws passed that limited civic freedoms as part of COVID-19 pandemic measures. The Court claimed that the government had acted within its rights and with the intention of preventing the spread of the virus.

“By adopting laws or amendments … which, inter alia, prescribe measures restricting fundamental human rights and freedoms in order to prevent the spread of the COVID-19 infectious epidemic disease … parliament acted within the limits of its powers prescribed by the constitution.”

The Director of Programs at Human Rights House criticised the response of the Croatian government, labelling their approach as sporadic and unplanned. Such actions have had negative effects on civil society, with the improvised shift in the education sector towards online teaching exposing great inequalities.

In a separate, positive development, the Croatian government has facilitated a move for greater energy efficiency through generous funding for renewable energy projects and organisations. President Milanović established an Energy Transition Council, which comprises 16 experts, including a representative of the Croatian Journalists’ Association, in hopes to educate and promote the public about energy transition.

“We want full equality, we want to finally live in Croatia in freedom and dignity. We have been calling for years on all people to join us in our fight against all forms of discrimination, humiliation, abuse and disregard for our rights and freedoms.”

🏳️‍🌈HVALA🏳️‍🌈 THANK YOU 💜 19th Pride March was amazing, we are still overwhelmed by all your impressions, reactions and breathtaking photos⬇️ See you next year on 20th Zagreb Pride March!🤩https://t.co/OgZIxxVNML #zgpride2020 pic.twitter.com/kffTJZtuSd

The sixth PRESS Film Festival was held in Zagreb on 11th September 2020. A panel was held to discuss media in global crises, with concern that financial hardships due to COVID-19 had accelerated the decline of the traditional media sector. The President of the Croatian Journalists Association said that journalism has proven to be of 'exceptional importance' during the crisis:

“Journalism has proven to be of exceptional importance in the current crisis, it has shown the importance of timely and accurate information given that we are being bombarded on a daily basis with numerous conspiracy theories," Croatian Journalists Association (HND) president Hrvoje Zovko.

Similarly, the Electronic Media Agency reported that the majority of Croatian media outlets have been providing accurate news during the pandemic.

COVID-19 continues to impact the media industry in Croatia. The Journalists’ Union of Croatia has pointed out that employers in the media sector are using COVID-19 as a justification to reduce the rights of media workers and journalists. The Media Freedom Rapid Response (MFRR) has announced a new application ‘Report It!’ to encourage the public to report violations against journalists’ rights across Europe. The campaign has insisted that abuse and threats towards media workers should not be normalised or tolerated. The application intends to have MFRR offer direct support to media workers at risk.

In a separate development, documented by Mapping Media Freedom, a reporter and camera operator for N1 Croatia faced threats and insults while recording an interview about COVID-19 with disease specialist Professor Alemka Markotić. The crew were filming the interview in an open area when they were approached by a couple who shouted at them for not wearing masks. However, the station maintains that the crew and guest were maintaining social distancing. The couple appeared ‘visibly drunk’ according to the crew. Tihomir Ladisic, program director at TV N1, said:

“Such attacks could be prevented only by acting together preventively and showing clearly, as a society, that such things are unacceptable.”

"The public has the right to express an opinion and criticise, but this is not it, this is the abuse and obstruction of a journalist doing her job.”

A media monitoring company has found that there is growing prevalence of hate speech throughout media content. The highest form of hate speech referred to ethnicity, followed by religion.