Climate protests and actions amid COVID-19, attacks on journalists continue 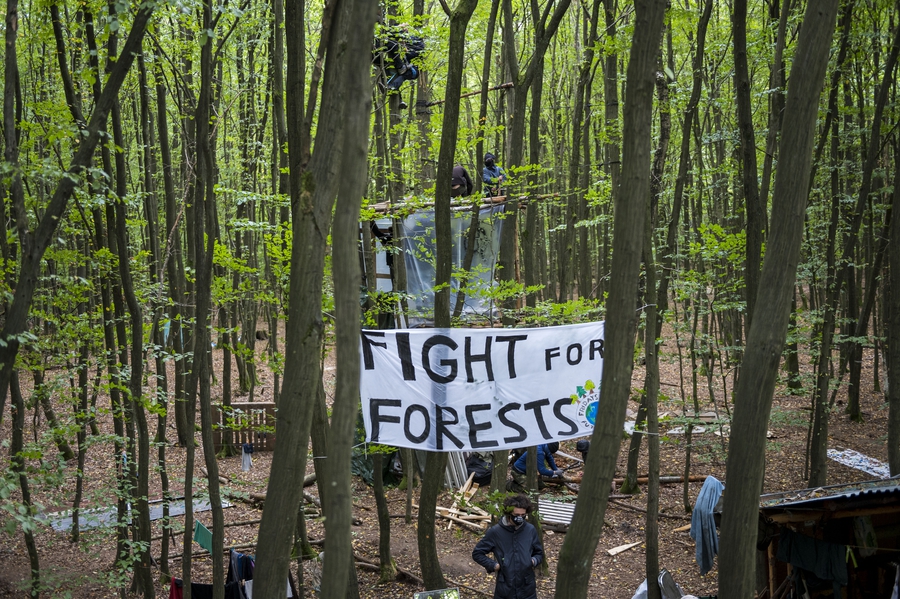 A newly published report by Greenpeace and the Civil Liberties Union for Europe raises concerns over the shrinkage of civic space in Germany since the onset of the COVID-19 pandemic. The report analyses how governments’ responses to the COVID-19 pandemic have affected civic freedoms in five European countries. It finds that civic space in Germany has suffered from quasi-bans on peaceful demonstrations including hefty sanctions on those who do make use of their right to protest. It furthermore points out that the possibilities for citizens and civil society organisations (CSOs) to have their say on government policies have been limited and that CSOs who carry out political activities have had their charitable tax status revoked.

On 26th September 2020, anti-coal protesters staged demonstrations against the use of fossil fuels at mines in Western Germany. Protesters dressed in overalls managed to gain access into the coal storage facilities. Some protesters were detained by officers. The protests were organised by environmental campaign group Ende Gelaende.

In early October 2020, thousands of climate activists gathered in the Dannenröder forest in Hessen to protest the felling of 27 hectares of forest to make way for an extension of the Autobahn. In another part of the forest, police destroyed barricades and treehouses of activists who have been occupying parts of the forest for the last year. Police said that 16 people had been arrested so far. Some of the activists were pulled down from treetops via hoisting platforms. The activists settled in trees and are expected to stay, with the intention to resist eviction for a long time.

In a separate but related action, on 5th October 2020, Extinction Rebellion activists commenced a week of actions by staging a blockade at the offices of the Transport Ministry in an attempt to halt all airport, motorway and federal highway projects. They also called for an end to the felling of part of the Dannenroeder forest. Police intervened, carrying away some protesters who glued themselves to the street with adhesive tape. The action was also followed by a “march of dead trees’ in Berlin.

At our blockade outside the Federal Ministry of Transport, @XRBerlin demands Germany stop the expansion and new construction of all airport, motorway and federal highway projects!

In addition, Fridays for Future socially distanced protests have kicked off around the world, including in Germany, where protests were staged in various cities including Berlin, the northern city of Bremen, Cologne and Hamburg

“We are in the middle of a pandemic and we cannot forget that, but we also need to know that the climate crisis isn't taking a break. The climate crisis is still here, so we need to take action and demand climate action,”- Quang Anh Paasch of Fridays for Future Germany told DW.

BREAKING: Today, 200k people have been on the streets with us in 450 locations in Germany wearing masks & keeping the distance. This global strike in the midst of a pandemic must move our leaders to act on the #climatecrisis. Now is the time to #FightClimateInjustice! pic.twitter.com/CfcCwrWmie

On 9th October 2020 police evicted residents of Liebig 34 house, described as “anarcha-queer-feminist" housing project, which has been a place of refuge for women, trans and intersex people since 1999. People gathered outside the house to protest the eviction. It was reported that fights broke out between black-clad demonstrators and the police in front of the building.

Thanks to everyone who took to the streets today to show their solidarity. #Liebig34 will stay in our hearts while we keep resisting capitalism and patriarchy. #b0910 #LiebigLebt pic.twitter.com/1CuQRETHkd

Protests against COVID-19 regulations continue in Germany. In the city of Konstanz thousands attended a protest against government imposed COVID-19 measures on 4th October 2020. Police, who were sent to ensure that protesters adhere to COVID-19 measures, said that a total of 12 rallies took place with about 11,000 people.

A protester wears a face mask with holes cut out over his eyes during a rally against the government's coronavirus measures at Lake Constance in Konstanz, Germany. 📷 epa-efe / Ronald Wittek#germany #protest #restrictions #coronavirus #2019nCoV #covid19 #pandemic #epaphotos pic.twitter.com/xWFnc7nahG

#Germany: Security guards physically blocked journalists from reporting during protests against coal mining & prohibited the reporters from filming, claiming they were on private property. One photographer was held in a headlock.
More: https://t.co/mUeAnyB91w#MFRR
Photo: @Ti_Wag pic.twitter.com/WfnWYRsrfd

#Germany: During the eviction of the squatted house #Liebig34 and the protests against it in Berlin, the police impeded journalistic work several times:https://t.co/8dF0n6qr3f @ECPMF @MediaFreedomEU https://t.co/fPsIX5R2eV