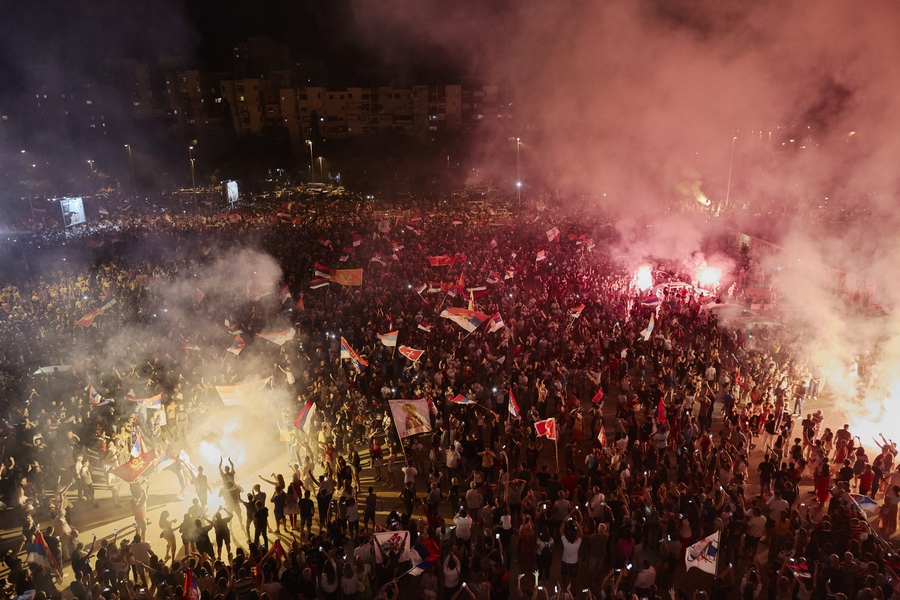 Post-election celebrations in Montenegro, following the victory of three opposition coalitions, have caused several incidents in Budva, Niksic, Herceg Novi, Podgorica, Pljevlja and Bar. According to the police, during the celebrations there were cases of attacks on police officers, physical attacks on other persons, insults on nationalistic grounds and mass fights. Damage to vehicles, which included one belonging to a media outlet, and intrusions into facilities was also reported. Due to this, the political parties have called for peace and the cancellation of the celebratory gatherings. The same appeal was made by the Serbian Orthodox Church (SOC) which called for citizens to refrain from gathering in the days after the elections.

Just before the elections, hundreds of people staged the largest protest so far against the proposed controversial Law on Religion which makes provision for a list of religious sites in the country. The law states that if groups cannot prove their right of ownership to religious properties they will revert to public ownership. The pro-Serb opposition announced that the demonstrations would continue across Montenegro until the election weekend.

Earlier in July 2020, during this reporting period, due to the ban on religious gatherings because of the deteriorating epidemiological situation (see previous update), the Serbian Orthodox Church (SOC) in Montenegro introduced new forms of communication with the public and its believers by holding religious gatherings online or “automobile gatherings” on the streets to protest the controversial new religious law.

In late July 2020, the Parliament of Montenegro adopted a new Media Law which states that a journalist must reveal their sources at the request of the Prosecutor's Office if it is "necessary to protect the interests of national security, territorial integrity and health". According to Reporters Without Borders (RSF), this obligation requiring journalists to reveal their sources would be a serious violation of the confidentiality of the sources of journalists. Critics state that if the new Media Law enters into force, it will be another blow to media freedom in Montenegro, which is already ranked 105th in the Reporters Without Borders index.

“It is very disturbing that the Law seems to have a political goal instead of improving the media environment. This is indicated by the fact that it was approved by the ruling majority without a general political consensus (without the support of the opposition) and should enter into force immediately before the parliamentary elections scheduled for August 30,"- head of the European Union and the Balkans, Pavol Szalai.

#Montenegro: New media law voted by Parliament violates confidentiality of sources, a condition of #pressfreedom, by obliging journalists to reveal them on the authorities' request. @RSF_inter urges the President @predsjednik_cg to return the law to Parliament for amendments. pic.twitter.com/da7UjiSpwY

In a separate development, ahead of the elections, the Montenegrin website Udar launched an attack, branding investigative journalists as ‘enemies of the state’. Dražen Živković, who works for the news site Borba and two reporters of the daily newspaper Vijesti, Vuk Lajović and Siniša Luković, who are known for critical reporting on the government, are portrayed as “collaborators of the Serbian secret services.”

RSF condemned the smear campaign against the journalists.

“The Udar website clearly violates journalistic ethics and poses a threat to real journalists. We ask the authorities responsible for registering online media to verify whether it respects legislation on media transparency. Under no circumstances is this witch hunt tolerable and has no place in a country seeking to join the EU. The authorities must do everything, so that it stops,”- Pavol Szalai, the Head of RSF’s European Union and Balkans Desk.

In addition, the European Centre for Press and Media Freedom (ECPMF) called on the authorities to investigate the online site and requested that the names of the journalists be removed from the site with immediate effect.

In another development, civic activist and member of the “Odupri se (Resist)” movement, Omer Sarkic, was arrested by the police following a Facebook post about the recent protests in Serbia. In his post, which was meant to be ironic, Sarkic called on the opposition Democratic Front to stage protests in front of the Serbian embassy in Podgorica over police brutality against protesters in Belgrade. This arrest is not an isolated case. Since the start of the COVID-19 pandemic, there has been a rise in arrests, which are mainly justified by the police on the grounds of preventing fake news. Nevertheless, these occurrences are a threat to freedom of speech.

The Coalition “Together for LGBTI rights” has condemned Velibor Marković, a lawyer, who posted threats on Facebook against journalist Damira Kalač who works for Vijesti and the LGBTI community. On Facebook he wrote that he would “break the spine of every LGBT person who kisses in front of him”. Kalač and Queer Montenegro have filed complaints against the lawyer for hate speech. In a statement, Queer Montenegro said:

"We demand from the competent authorities to adequately and in accordance with the law process this case and thus protect our basic, legally guaranteed human rights.”

Election coverage by the media

Election monitoring conducted by the Organisation for Security and Cooperation in Europe (OSCE) Office for Democratic Institutions and Human Rights (ODIHR) revealed that broadcasters reported on the elections in a polarised manner. It found that the ruling party benefited from dominant news coverage and that there was a “lack of independent editorial coverage” which “lowered the quality of information available to voters.”

“It is most regrettable that the gaps in the legislation and lack of independent media scrutiny make the misuse of office and state resources possible. Strong political will is needed across the political spectrum to improve the law and practice of elections through an inclusive reform process,” Tamás Meszerics, head of ODIHR’s limited election observation mission.