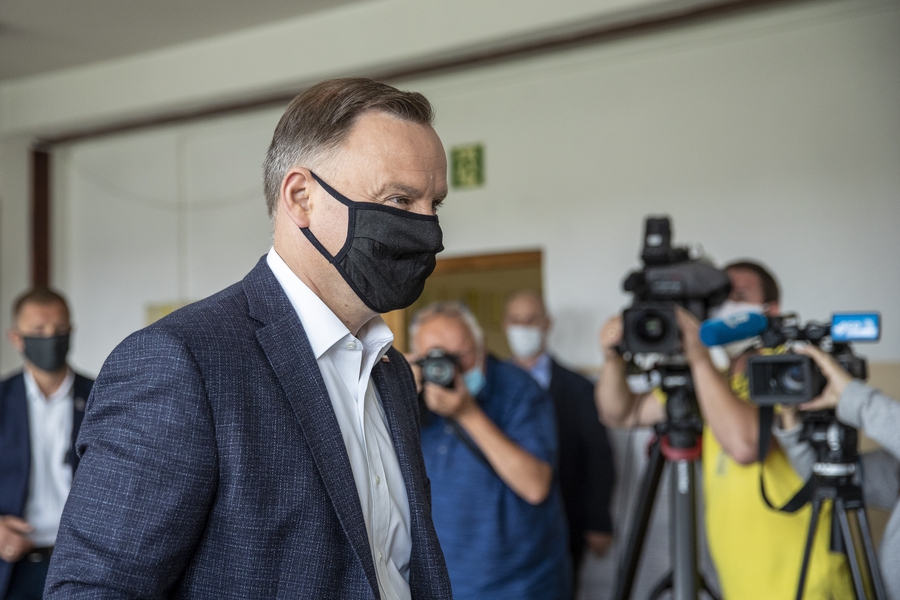 On 28th June 2020, the incumbent president, Andrzej Duda (supported by the governing Law and Justice (PiS) party) won the most votes in Poland's presidential elections. However, since he was unable to secure more than 50% of the votes in the first round (which would have been likely had the elections been held earlier), on 12th July 2020 Duda faced a runoff vote against Rafal Trzaskowski, Warsaw mayor and presidential candidate from the main opposition centre-right Civic Platform (PO) party. Duda narrowly secured a victory, winning 51,2% of the vote.

Duda’s campaign focused on emphasising “traditional family values,” and on attacking the LGBTI community. For example, he often said that the LGBTI are not people, but “an ideology” comparable to a “form of neo-Bolshevism".

LGBT is a form of "neo-Bolshevism" that is "smuggled into schools" to "sexualise children", said President Duda in a campaign speech

"They try to tell us that [LGBT] are people, but it is an ideology...even more dangerous to man [than] communist ideology" https://t.co/jeFiI8Rpui

Trzaskowski, in turn, expressed support for civil unions for same-sex couples, opposition to the tightening of abortion laws and the restoration of state support for in-vitro fertilisation. He also made clear that he would not allow attempts at further “breaking the constitution or the rule of law” in Poland.

In an interview with TV Trwam on 9th May 2020, Environment Minister Michal Wos said that the Polish government was considering drafting legislation that would oblige non-governmental organisations (NGOs) to declare any foreign sources of financing.

“I set up such a team in the ministry, such a working group, to disclose the financing of NGOs, not just ecological ones....Poles have a right to know whether they are indeed organisations that work in the interests of Poles...” he said.

Ewa Kulik-Bielinska, director of the pro-democracy Batory Foundation in Poland, said that such information can already be easily found on the websites of ecological, human rights, educational and any other organisations. She fears that the government’s aim was to discredit NGOs in the eyes of the public.

“This is the Hungarian model,” she said, referring to the 2017 NGO law that required civic organisations to disclose foreign donors if they received more than 24,000 Euros a year from abroad and label themselves as “foreign-supported organisations” in all their publications and online presence. This was found to be in violation of EU law by the European Court of Justice (ECJ) recently.

In April 2020 women staged a socially distanced protest in Warsaw against the introduction of the “Stop Abortion bill” which seeks to further restrict abortion laws in Poland. Currently, abortion laws in Poland are one of the most restrictive in the EU, which only permit abortion in the case of severe or fatal fetal anomaly or in cases of rape or incest. The bill seeks to prevent abortion in cases of fetal abnormalites. The “Stop Pedophilia Bill” which was also introduced to parliament, seeks to criminalise “anyone who promotes or approves the undertaking by a minor of sexual intercourse or other sexual activity.” This would seriously hamper teachers and organisations, who provide information on sex education and sexual and reproductive health. The protest, which was organised by the Polish Women’s Strike, took place by forming a queue outside a store and standing two metres apart, with masks and placards at hand. Both bills have been referred to parliamentary committee for review.

Fight the virus, not sex education and women's right to choose. We stand in solidarity with Polish protesters. pic.twitter.com/oXWZjPL38U

Human Rights Watch (HRW) urged the Polish government to focus on the COVID-19 pandemic, rather than restricting women's rights.

“Undermining access to abortion and comprehensive sexuality education doesn’t protect anyone, and only raises the prospect of dire health consequences for Poland’s people....The chaos and anxiety surrounding COVID-19 shouldn’t be used as a distraction from harmful attempts to push through dangerous legislation,”- Hillary Margolis, senior women’s rights researcher at Human Rights Watch.

Over a 100 NGO’s, including Amnesty International Poland, issued a statement calling for urgent action to ensure safe abortion in Europe.

“The pandemic affects all aspects of our lives, but it should not be used as a pretext to restrict women's sexual and reproductive health decisions,"- The European Network of the International Planned Parenthood Federation.

On 8th May 2020 business owners staged a protest over insufficient government support for businesses during COVID-19. The protests began with car honking and blocking the streets during the demonstration, which later evolved into protesters walking in the streets and then setting up an “overnight makeshift camp” outside the Prime Minister's office. The protest was organised by StrajkPrzedsiębiorców (Strike of Business Owners). Police and protesters clashed during the day and 37 protesters were detained during the evening for failing to adhere to safety measures.

Following the first protest, demonstrations by business owners were also staged over the next two weekends. However, these protests were also joined by others, such as far right and anti-5G groups. During the protest held on the second weekend, police are reported to have used tear gas to disperse protesters and once again several protesters were detained.

In a separate development, a protest was staged in reaction to Polish public radio censoring a song which was critical of the government. The song by Kazik Staszewski’s “Twój ból jest lepszy niż mój” (Your Pain is Better than Mine’) criticises the chairman of the PiS party. The song featured on a chart show on Radio Three but was soon disabled on the radio station’s site. Some staff members have resigned as a result. Following this, journalists protested in silence outside Radio Three’s building, with placards like “Free media” and “Stop PiS”. Police issued fines to some protesters for breaking lockdown rules.

As previously reported on the Monitor, PiS politicians have for many years worked to undermine freedom of expression in the country by threatening critical voices with legal action and other retributions.

Independent media outlet Gazeta Wyborcza, for example, has repeatedly been subjected to such attacks. As Gazeta Wyborcza’s publisher, Jerzy Wójcik, said in a statement:

“Currently, Gazeta Wyborcza deals with dozens of lawsuits brought by the governing party, state-owned companies and politicians belonging to the ruling camp. It is only thanks to the tireless efforts of our lawyers and the institutions that support us, that we are able to continue our mission and operate as a dynamic, independent media outlet.”

The situation has become so dire that the Media Freedom Rapid Response (MFRR), a mechanism to monitor and respond to threats against media workers in the EU and candidate countries, has given €15,000, its largest grant to date, to support the outlet’s legal defence.

“Lawsuits and legal threats against Gazeta Wyborcza demonstrate once more how laws are being abused to intimidate and censor the media. This is why it is urgent to put in place Anti-SLAPP measures at European level that would discourage politicians and powerful corporations from filing vexatious lawsuits against journalists and the media,”- Flutura Kusari, legal advisor at the European Centre for Press and Media Freedom (ECPMF).

PiS politicians have a track record of accusing domestic foreign-owned media outlets of serving foreign interests and the international media of covering the party in an inaccurate and biased way.

In addition to attacking independent voices, the government ensures good media coverage by using public television as its mouthpiece.

Reporters Without Borders (RSF) reports that in the run-up to the first round of the presidential elections, Poland’s public television Telewizja Polska (TVP) depicted incumbent President Duda as a man with no weaknesses, while the most popular opposition candidate Rafał Trzaskowski was portrayed as a man who is “on the payroll of the biggest enemies of conservative and patriotic Poland”. RSF cites a report by the agency Press-Service Monitoring Mediów published on 19th June 2020 which states that “97% of the items on TVP’s main news programme “Wiadomości” from the start of the campaign presented President Duda in a positive light and 3% were neutral. At the same time, of the 31% fewer references to Trzaskowski, 87% were negative and 13% were neutral.”

“Instead of serving the public interest, TVP serves the government and instead of combatting disinformation, it broadcasts it...The government’s systematic abuse of the public TV shows that press freedom should be included in the procedure under Article 7 of the Treaty on the European Union, which is discussed by the EU Council and could lead to sanctions against Poland for violation of European values,”- Pavol Szalai, the Head of RSF’s European Union and Balkans Desk.

As reported above, TVP has been used as a mouthpiece of the government when it comes to coverage of anti-LGBTI rhetoric. An anti-LGBTI documentary entitled Invasion, which claimed to reveal the “aims, methods and money” behind Poland’s LGBTI community, was aired by TVP. However, on 8th June 2020 a Polish court ordered TVP to take it down from YouTube. It also banned the broadcaster from airing the film for a year. It found that the documentary “violates the personal rights of the Campaign Against Homophobia”, the organisation featured in the film.

Two activists who put up posters which accused government of manipulating COVID-19 numbers are facing a possible ten years in prison. Amnesty International reports that the activists were detained and charged with “theft and burglary” for removing the glass covers of already existing advertisements and replacing them with their own posters.

In a statement, Amnesty International stated:

“These charges are absurd and appear to be intended to punish those who express their criticism of the authorities. If they are not dismissed, they may have a chilling effect and create additional barriers to the vital work of human rights defenders in the country. These strong-arm tactics are part of a wider pattern of harassment of protesters and activists in Poland.”