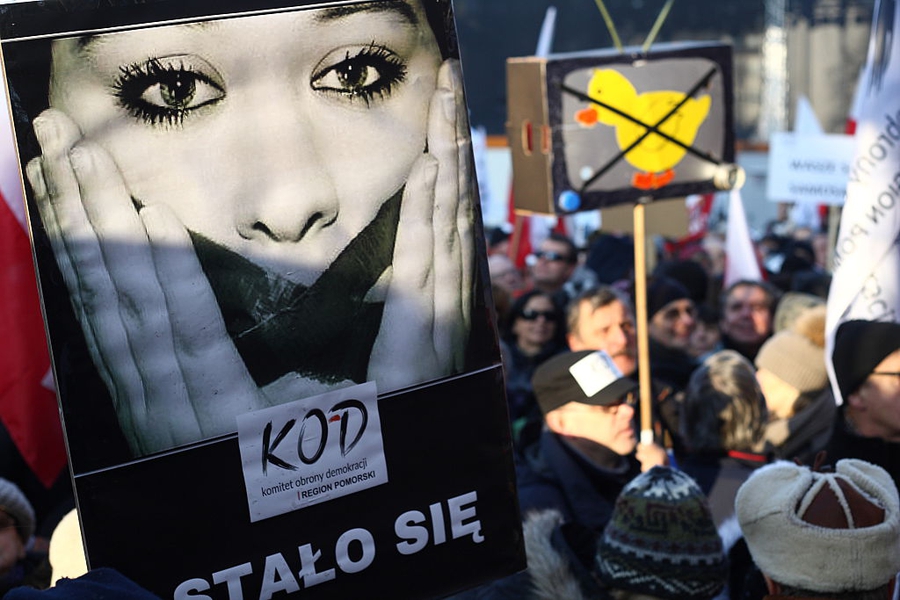 Media reports of 20th May 2019, alarmed that the Sejm, the lower house of Parliament, adopted a draft amendment to the Penal Code, that can "tighten" art. 212 of the Penal Code related to public defamation. The amendment added a new criminalised "form" of defamation punishing "anyone who, in order to commit an offense specified in § 1 [related to public defamation] or after committing it, creates false evidence to prove a false charge or urges other people to confirm the circumstances covered by it". This new paragraph of art 212 of the Penal Code will carry punishment of a fine or imprisonment for a up to one year. Majority of the members of parliament who voted for this restrictive amendment belong to the ruling right-wing party, Law and Justice party (PiS). The legislative work on the amendments continue as the bill will have to be next approved by the Senate.

This latest move to strengthen criminalisation of defamation sends a chilling message to the media and it comes in the already worrying context of defamation being used against critical journalists and activists (see below).

In February 2019, Jaroslaw Kaczyński, the leader of Poland’s ruling Law and Justice party (PiS) filed a criminal libel complaint against two investigative journalists working for the independent newspaper Gazeta Wyborcza. The targeted journalists, Wojciech Czuchnowski and Iwona Szpala, published reports in late January 2019 alleging Kaczyński’s involvement in a corruption scandal. The lawsuit against them was filed under Article 212 of the Penal Code, that refers to public defamation and could lead to a fine or up to one year in prison.

According to The Helsinki Foundation for Human Rights (HFHR), the criminalisation of defamation in Poland is a threat to the freedom of speech. The HFHR warned that the possibility of incurring criminal sanctions, including imprisonment, may trigger a chilling effect on freedom of speech - that may lead to journalists or other people refraining from speaking out about sensitive issues fearing criminal consequences.

International Press Institute (IPI) also echoed these concerns calling on Poland to drop the libel charges against the journalists immediately and abolish defamation as a criminal offence. It also said:

“This case is another example of the ease with which criminal libel laws can be abused by powerful figures to intimidate the press.”

Rather then removing criminal penalties for defamation, PiS government in PL enhances punishing for speech. An amended criminal code will punish for producing "false evidence" for defamation, and the charges will be brought by public prosecutor, not by private criminal indictment

Another critic of the PiS ruling party, Wojciech Sadurski, a law professor at the Universities of Sydney and Warsaw, also faced lawsuits for defamation filed by the PiS and the TVP in January 2019. The charges, part of one criminal and two civil suits, are in connection to twitter posts by the academic which criticised the governing PiS party and the Polish public broadcaster, TVP.

On 21st January 2019, the President of PiS, Kaczyński, launched legal proceedings against Sadurski. On the same day, the public broadcaster, TVP filed a separate criminal case against the academic. Subsequently, on 20th March 2019, TVP filed a further civil suit against Sadurski following his twitter post concerning the TVP and the murder on 13th January 2019 of another critic of PiS, the Gdansk mayor, Paweł Adamowicz.

In January 2019, TVP issued a statement warning that it will launch "Lawsuits or an indictment based on the Criminal Code” against “persons who absurdly stated that there was a link between content published by TVP and the death of Mr. Paweł Adamowicz.”

Paweł Adamowicz was the Gdansk mayor who was a leading liberal advocate and one of the main critics of Poland’s ruling PiS right-wing populist party. In January 2019, he was stabbed on stage at a charity concert in front of thousands of people and later succumbed to his injuries. The alleged perpetrator that was arrested, a 27-year-old man, was reportedly recently released from prison and mentally disturbed. However, Adamowicz's supporters believe that the increasing rhetoric of hatred which has filled the public space, promoted through the ruling party and the public Polish media, has contributed and influenced his murder. Supporters and Adamowicz's family  blamed the “hate speech” against  Adamowicz that they say has been broadcast on the TVP government television. TVP denied these claims.

Adamowicz was a defender of migrants and refugees and of LGBT rights and because of his views, he has been regularly subjected to personal attacks and abuse on social media and from right-wing media outlets, according to observers. For example, on the day of Adamowicz’s death, the far-right politician Grzegorz Braun described him in a media interviews as a “traitor to the nation” for his political views.

While Poland continues to be deeply divided, Gdańsk is showing again that it deserves to be called ‘the city of freedom’. Today over 1500 high school students marched in Gdansk calling for respect, end of hate speech and divisions in society. There is hope ❤️ pic.twitter.com/Pwomfcj90f

Poland’s media landscape is increasingly polarised as independent media outlets face smear attacks by leading political figures exploiting public sentiments. For example the PiS leader Kaczyński previously accused independent media outlet, Gazeta Wyborcza of disseminating "liberalism, anti-traditionalism, anti-Catholicism" and was "against the very notion of the nation." Government institutions have now been reportedly banned from advertising in the paper or subscribe to it. Similarly, in an apparent attempt to control the public sphere, the government has tried to weaken several other independent print media outlets such as Polityka and Newsweek Polska by restricting advertising from public funds.

This madness in Poland is spreading - free media, already under enormous pressure, now facing this: politician (from small right-wing party that supports the ruling party) wants a journalist prosecuted for a tweet of the rainbow Mary https://t.co/kX7g5NWw4N

On 6th May 2019 , the police seized activist Elżbieta Podlesna’s laptop, mobile phone, and memory cards and arrested her on suspicion of offending religious sentiments. She was arrested in connection to posters bearing an image of the ‘Black Madonna of Częstochowa’ with rainbow halo that appeared in Płock, a city in central Poland. The Black Madonna of Częstochowa is a revered Byzantine icon held in the monastery of Jasna Góra, that many take to be a symbol of the Polish identity. Offending religious sentiments is a crime under the Polish penal code, Art 196, punishable by up to two years in prison. As a response to Podlesna’s arrest, on 7th May about 300 people staged a protest in central Warsaw holding posters of the altered Black Madonna.

In a separate and concerning development related to religion and freedom of expression, in early April 2019, Catholic priests burned books and religious symbols arguing they were bad influences. These books included JK Rowling’s Harry Potter books and Buddhist figurines. Reverend Rafał Jarosiewicz, who led the public burning, later apologised saying he had not intended to condemn specific authors, religions or social groups.

Restrictions on gender and LGBT freedom of expression rights

In the context of the approaching European parliamentary elections, Poland’s ruling Law and Justice party (PiS) has focused its campaign on LGBT issues. PiS leaders have been recorded using campaigning language that undermines Poland’s LGBT community. In particular, PiS suggests that the LGBT movement endanger Polish values as well as he portrays it as a threat to the nation and the “Polish state”.

On 27th April 2019, another “gender-related” attack on freedom of expression was reported. According to Polish press reports, three works by female artists had been removed from the permanent collection galleries at the National Museum in Warsaw. One of the removed works was Natalia LL’s Consumer Art (1972), a photo series that shows a woman suggestively eating a banana.

The head of the National Museum, Jerzy Miziołek, appointed recently by PiS, told the Polish newspaper Gazeta Wyborcza that “certain topics related to gender shouldn’t be explicitly shown.” Miziołek’s decision to remove the works in question came after he was summoned by Poland’s ministry of culture.

As a reaction, Poles mobilised to oppose this decision through social media activism and on 29th April 2019, hundreds gathered to eat bananas in front of the museum. Following the public outrage and push back, the museum returned the artworks to the galleries.

How Poland's Attacks on LGBT Rights strengthened the movement: When challenged, Poles still believe in the EU and the values it stands for, and here rallied around those values in the face of PiS attacks. https://t.co/76YrlinvOy

In a positive development, on 9th April 2019 the Provincial Administrative Court in Warsaw ruled that organising a protest may not be conditional on obtaining prior consent by a road administrator if a protest blocks a road. The Law on Assemblies only requires a notification to authorities. The court further stressed that Art. 57 of the Constitution guarantees everyone the freedom to organise and participate in peaceful assemblies. The contestation over the law’s interpretation started in November 2017, when activist Adam S. organised a protest which placed tents and old furniture in front of the Supreme Court in Warsaw. The protest blocked a road, which led to the enforcement of a penalty on the organiser. Subsequently, in view of this ruling, the Court repealed the fine (PLN 1,312.50, about USD 350) imposed on Adam S.

Separately, on 2nd February 2019, a group of protesters in front of the public broadcaster Telewizja Polska (TVP) prevented the host of several TV programmes, Magdalena Ogórek, from leaving the building. The protesters also reportedly verbally abused her, "scratched" her car and covered it with leaflets. The TVP is widely viewed as being under the control of the ruling Law and Justice (PiS) party and has been criticised for biased media coverage in support of the government.

Two days after the incident, during its evening programme Wiadomości, TVP published the images and personal data of ten people who the channel alleged to have participated in the event. The move was denounced for violating privacy laws. Through a post on twitter the police denied providing the personal information of the protesters to the media and claimed that the list TVP published was “not entirely consistent” with their findings.

The Helsinki Foundation for Human Rights (HFHR), a Warsaw-based human rights NGO, filed a complaint to the National Broadcasting Council and warned that:

“publishing a person’s image without their consent not only is illegal and amounts to a violation of their personality rights but also, in this particular context, stigmatises the affected protesters”.