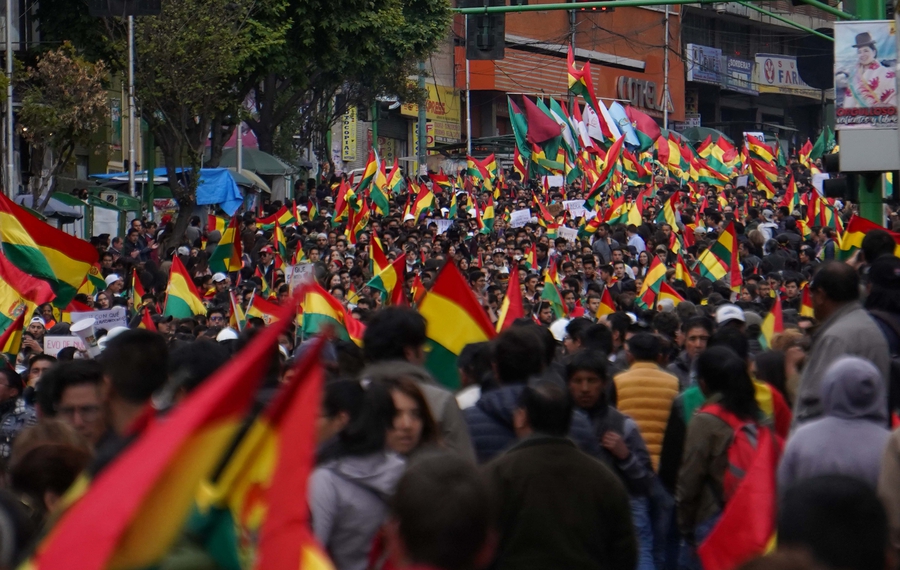 Mass protests erupted after the results of Bolivia’s national elections were announced, indicating a first round win for current president Evo Morales. Initial results, with over 80% of votes counted on 20th October 2019, suggested a close race headed for a second round. However, after a 24-hour suspension in the tally reporting, Morales was declared the winner, narrowly avoiding a run-off. Thousands of people took to the streets contesting the election result and claiming that the process was marred by fraud.

By 25th October 2019, the Special Force to Combat Crime accounted for at least eighty people arrested and eight civilians injured in protests. Many of the confrontations reported have involved groups of government supporters and opposition clashing violently. News outlets reported at least thirty people injured in demonstrations on 28 October 2019, many with bullet wounds.

Several civil society organisations have called for a second round of voting with a view to pacifying the country, and urged an investigation into the alleged electoral irregularities. While the Organisation of American States (OAS) completes an audit of the electoral process, the opposition has vowed to continue mobilising.

On 12th October 2019, the newspaper El Potosí reported that one of its journalists, broadcasting live from confrontations taking place while the governing Movimiento al Socialismo (MAS) party held a campaign event, had internet connectivity issues believed to be an intentional internet cut-off. The same newspaper reports having been flooded with messages from anonymous and fake accounts.

On 17th October 2019, independent media reported difficulties in obtaining circulation permits for vehicles meant to transport journalists and news crews during election day. Fides News Agency (ANF) and daily newspaper Página Siete both had permit requests rejected without explanation. The newspaper Los Tiempos also had four requests denied. These restrictions are seen by the media as a barrier to journalists carrying out their work in covering elections.

During the election on 20th October 2019, several journalists denounced attacks or restrictions. The mayor of Tarvita municipality, Justino Cruz, allegedly assaulted Gabriel Cruz, a reporter with Cultural Action Loyola (ACLO), after the reporter filmed him in a vehicle transporting people between rural towns. This practice is prohibited by Bolivian authorities to prevent electoral fraud. In Cochabamba, journalists accredited by the Departmental Electoral Tribunal (TDE) denounced that the space designated for journalists was closed during election day.

On 21st October 2019, police officers and government supporters assaulted a journalist and two photographers who were covering a voting count in La Paz. Wilson Aguilar, a journalist with the daily newspaper Los Tiempos, denounced being attacked while registering police officers beating up La Razón’s photographer, Álvaro Valero. A government supporter also attacked Aguilar, dropping his mobile phone on the ground. Another unidentified photographer was also attacked. According to Bolivia’s National Press Association, Álvaro Valero had to be taken to hospital for treatment.