Uruguay: repression of labour protests based on Law of Urgent Consideration more

18 attacks against freedom of expression documented in a year more 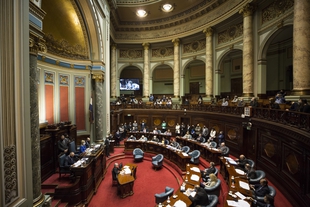 On 14th September 2022, National Party Senator Graciela Bianchi interrupted a student leader, belittled her and attempted to stop her from speaking up at a Senate Commission meeting. The incident took place at a session of the Education and Culture Commission attended by several representatives of educational bodies, including Génesis Gallardo, an elected student representative at the Education Training Council (CFE).

On 14th September 2022, National Party Senator Graciela Bianchi interrupted a student leader, belittled her and attempted to stop her from speaking up at a Senate Commission meeting. The incident took place at a session of the Education and Culture Commission attended by several representatives of educational bodies, including Génesis Gallardo, an elected student representative at the Education Training Council (CFE). Senator Bianchi, the Commission’s president, cut Gallardo off on two separate occasions, and later made several comments implying that the young leader was lacking in humility. Bianchi also refused to give Gallardo a chance to respond to her comments until another participant of the meeting intervened.

On Twitter, Gallardo commented on the situation, saying the senator “insulted and delegitimised” her, indicating that because of her youth she “could not question the process of educational transformation.” This was not the first time Bianchi had delegitimised young leaders. In August 2022, she also used her social media to share false information stigmatising another student activist.

Protests against reforms promoted by government

On 15th September 2022, workers of over 20 unions joined a 24-hour national strike organised by trade union convention PIT-CNT against inequality and the government’s social and economic policies. Under the slogan “strike against the inequality model,” the workers’ mobilisation rejected wage cuts, the rising cost of living, inflation, as well as the government’s proposed pension reform. The union estimated that over a million people had participated in the strike.

Demonstrations against the government’s education and pension reforms continued in October and November 2022. On 15th November 2022, for example, workers across Uruguay observed a four-hour strike against pension reform promoted by President Luis Lacalle Pou’s government. Workers in several sectors joined a mass march in Montevideo, calling on legislators to reject the government’s draft reform which would raise the retirement age, reduce early retirement benefits and promote private pension funds.

In response to proposed education reform, secondary school students occupied multiple schools and education institutions. School teachers also took part in some of the occupations, which were often blocked or saw protesters quickly evicted by police. Government authorities said that the occupations were “not licit,” a statement which was rejected by labour law experts. Union Federación Nacional de Profesores de Educación Secundaria (National Federation of Secondary Education Teachers - Fenapes) criticised the evictions, saying that authorities “send the police because they don’t want dialogue” with protesters.

In September 2022, the Asociación de la Prensa Uruguaya (Uruguayan Press Association - APU) warned about the repeated instances of stigmatisation of workers at broadcaster TV Ciudad by public officials. The association was responding to an incident at a press conference in which the Presidency’s Secretary told reporter Macarena Vico not to “provoke without reason” after she asked him some questions, and implied that she had been sent by the opposition to ask awkward questions. Vico’s colleagues spoke out in her defence, saying that the official’s attitude undermined the reporter’s work and that the situation took place amid increasing stigmatisation of the press by public officials. APU emphasised that in previous months, President Lacalle Pou had also made comments implying that TV Ciudad was working for the opposition. The news outlet is the public broadcaster of the city of Montevideo, whose mayor Carolina Cosse is a member of Frente Amplio.

A separate but similar situation arose after a news programme on TV Ciudad revealed contents of a secret security plan on 2nd November 2022, and a criminal investigation was launched into the leak. A confidential document on the National Intelligence Plan had been distributed to lawmakers and relevant government institutions by the director of Uruguay’s Office of Strategic Intelligence, Alvaro Garcé. After TV Ciudad’s MVD Noticias revealed a part of the document’s content, legislators launched an investigation while Garcé filed a criminal complaint for disclosure of classified information.

The broadcaster’s director, journalist Eduardo Preve, faced stigmatisation and accusations of having endangered national security. Preve testified in the investigation and was questioned by the Public Prosecutor’s Office in regard to his sources, but refused to provide the information based on journalists’ right to confidentiality and secrecy of sources. The investigation into the leak was later shelved by the Public Prosecutor’s Office without laying any charges.

Nationalist Senator Graciela Bianchi accused Preve of being a “political operator” for the “populist and radical left”. Bianchi had previously made similar statements regarding the journalist, stating in August 2022 that she had “taken care of him” during the coronavirus pandemic because he “damaged the country.” At the time, the APU condemned Bianchi’s statements, questioning their meaning and asking legislators to publicly reject them.

Obstruction of journalism in coverage of corruption scandal

On 25th September 2022, Alejandro Astesiano, the head of President Luis Lacalle Pou’s security team, was accused of involvement in a forgery scheme to provide Uruguayan documents for Russian citizens. Astesiano was arrested for allegedly leading the forgery ring, sometimes operating from the president’s residence.

A judge in Astesiano’s formalisation hearing denied journalists entrance to the courtroom at the last minute, although he had not declared any reservation on the case. The APU complained about the procedure and noted that, on principle, hearings are public. They requested a meeting with the President of the Supreme Court of Justice to raise this matter and discuss the improvement of such procedures.

In a separate incident related to the same case, in December journalists working with newspaper El Observador said they had been asked not to publish a news article regarding Astesiano. The censored article covered exchanges between Astesiano and the deputy director of the National Police in which the head of the President’s security requested private information on the President’s ex-wife from the police official.

Journalists working with El Observador published the article on their own personal channels after the newspaper’s management decided not to run it. The APU said it had received information that government officials allegedly pressured the outlet. The Centro de Archivo y Acceso a la Información Pública (Archive and Access to Public Information Centre - Cainfo) also expressed concern about the censorship under pressure from the government, warning that similar incidents of political interference had occurred in recent times.

On 19th August 2022, journalist Alfonso Lessa was driving on a highway with his wife when another vehicle approached his at high speed, in what the journalist identified as an attempt to drive him off the road. When Lessa was able to leave the road, the other car immediately drove off. The journalist filed a complaint, underscoring that this was the latest incident after a series of threats. The APU condemned the incident, expressing solidarity with the journalist.

On 25th October 2022, news outlet Subrayado reported that their news crew had been attacked by protesters while covering a demonstration by education unions against education reforms. The news outlet said that the reporters were filming an altercation between a driver and protesters who were blocking a road, when protesters attempted to stop the camera operator from filming. Some protesters pushed the camera away and insulted the reporters. The APU condemned these actions and expressed support for the press workers. It noted that the Coordinator of Education Unions issued a similar note in solidarity with press workers, which was viewed as a positive sign.

On 3rd October 2022, an appeals court confirmed a ruling that ordered Google to remove articles from its search results containing information on a criminal complaint. The case is related to a criminal case that happened over ten years ago, which ended up being shelved. An anonymous person who was involved in the criminal proceedings requested that articles associating their name with the case be removed from Google. The courts applied new legislation on the “right to be forgotten” to decide on the case, aiming to protect an individual’s privacy, intimacy and honour.

However, some experts criticised the ruling, arguing that it undermines the right to freedom of expression by affecting the distribution of public interest information. Edison Lanza, former Inter-American Commission on Human Rights Special Rapporteur for Freedom of Expression, said that “what the press publishes is of public interest at the time” and that the shelving of a criminal complaint does not mean the issue did not happen or that it was of no significance. Lanza said that in his understanding, the court case relates to a complaint against a family for maintaining employees in slave-like conditions – an issue of massive public interest, and which led to a settlement with compensation to those affected.