Hate crimes on the rise more

No guarantees of safe passage for Edward Snowden in Norway more 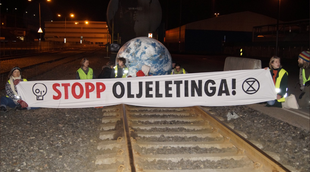 Several protests for environmental rights took place during this period including the first Fridays for Future strike since the pandemic, a protest against imports of Russian fossil fuels and a protest to halt mining construction.

On 25th March 2022, dozens of young people participated in the world's most well-known school climate strike Fridays for Future in Oslo. This was the first time that this demonstration was held since the reopening of Norwegian society after the pandemic.

On 25th April 2022, activists from Greenpeace and Extinction Rebellion Norway blocked an oil tanker from delivering Russian oil to Norway. The group chained one of their boats to the large vessel in protest at the Russian invasion of Ukraine. Several protesters were arrested by police. The group is calling on the Norwegian government to ban imports of fossil fuels from Russia.

“Oil is not only at the root of the climate crisis, but also of wars and conflicts. I am shocked that Norway operates as a free port for Russian oil, which we know finances Putin’s warfare.”

In an attempt to halt a controversial mining project, activists from Nature and Youth (Natur og Ungdom) have been protesting for weeks by chaining themselves. During one staged protest in the construction area, activists were removed by city police, with seven activists arrested. Leader of the group, Gina Gylver, is facing a fine of approximately 980 Euros.

Journalists and Norwegian press associations strongly condemned every attempt to obstruct media freedom in the coverage of the Russian attack against Ukraine in a joint statement issued on 3rd April 2022. Stressing the large responsibility that is derived from the high standards of media freedom that the country has achieved, press organisations offered their financial and practical support to their colleagues in Russia and Ukraine who are victims of censorship and of the war.