Government commits to toughen penalties for attacks on journalists more

Attacks on media freedom: a threat to accession to the European Union more 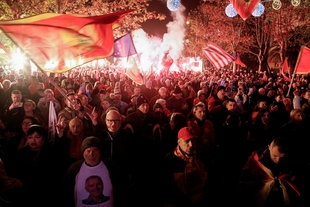 Political crisis and anti-government protests marked the last two months of 2022. The political crisis between the pro-Western, and pro-Serb and pro-Russian parties in Montenegro deepened in the past months. Montenegro has been in political deadlock for months after its Constitutional court was left without a quorum due to the retirement of judges. The court's blockage could make it difficult to organise next year’s presidential elections and early parliamentary elections. On 12th December 2022, hundreds of protesters again rallied under the slogan "We Are Many” in the capital. Clashes broke out between protesters and police following the adoption of the amended law giving the parliament's pro-Serbian, pro-Russian majority presidential powers. The move stripped the country's pro-Western president of a decisive role in appointing the prime minister.

On 16th November 2022, BIRN launched an interactive map giving detailed information about 71 far-right and extremist groups and organisations operating in six countries in the Western Balkans, created by researchers and journalists. The Center for Civic Education (CGO) reacted that the map section for Montenegro is controversial because it targets individuals and groups without convincing arguments, equating them with extremist currents, which can have negative consequences for those individuals and groups, but also for Montenegrin society. They asked for a revision of the map and stated that “it is unprofessional and irresponsible to target individuals and informal groups who are activists or open critics of clerical and authoritarian government structures, the church and its activities in society, by equating them with organised and/or paid extremist and radical groups of religious organisations or circles close to them.”

Since its publication, the map has caused strong reactions from prominent CSOs, intellectuals and journalists throughout the region. In Montenegro, the public reacted to the targeting of nine civil activists and human rights defenders, including two Pobjede journalists, as religious fanatics and right-wingers in a scandalous and tendentious manner. BIRN’s regional director resigned at the beginning of December 2022, while on 14th December 2022, BIRN’s disputed map was taken down from the internet until further notice, pending the results of an independent audit that will review the content and methodology of the map.

On 17th November 2022, the Center for Development of NGOs (CRNVO) sent a letter to the Prime Minister with specific requests that all ministries that have not yet announced public calls for financing projects/programmes of NGOs or decisions on the allocation of funds for NGO projects, do so urgently, in accordance with the law, so that the projects could start this year. If not, according to CRNVO, NGOs will be left without funds for projects this year. CRNVO expressed serious concern about violations of the Law on Non-Governmental Organisations in respect of financing projects and programmes of non-governmental organisations, whereby the government continues the practice of the previous ones in terms of delays and neglect of obligations arising from the Law on NGOs in this area. CRNVO has pointed out that the Bill on the Budget grossly violates the Law on NGOs, in terms of financing. As stated, the Law on NGOs stipulates that the state provides money for financing projects and programmes in areas of public interest implemented by NGOs, in the amount of at least 0.3 per cent of the current annual budget. However, the funds planned for NGOs are far below the minimum established by law.

In response to the open call of the government for amending the Law on free legal assistance in December, UMHCG initiated amendments that would define the possibility that NGOs that deal with the provision of free legal aid and legal representation, in addition to the courts, would be recognised in law. According to UMHCG, many citizens have greater trust in NGOs compared to the courts, which is confirmed by its statistics that in just one year they have provided more legal information, advice and representation compared to the entire statistics of the courts since the adoption of the Law.

Political crisis and anti-government protests marked the last two months of 2022. The political crisis between the pro-Western, and pro-Serb and pro-Russian parties in Montenegro deepened in the past months. Montenegro has been in political deadlock for months after its Constitutional court was left without a quorum due to the retirement of judges. The court's blockage could make it difficult to organise next year’s presidential elections and early parliamentary elections.

On 1st November 2022, dozens of citizens gathered in front of the Assembly building, amongst increased police presence, to protest against what they called a "constitutional coup directed by the Democratic Front". The protest was related to the Parliament discussions on the proposal to amend the Law on the President, which was submitted by the party, to limit presidential powers. During the protest police used pepper spray to disperse protesters. Protests continued on 8th November 2022 in defence of Montenegro's European path amid attempts by pro-Serbian and pro-Russian elements to destabilise Montenegro and the region, as protesters claimed.

On 17th November 2022, over ten thousand people gathered at the second protest held under the slogan “We’re many”/“Ima nas” in front of the Parliament building. No incidents were reported at the protest. According to the organisers, Forum Luča, the protest is due to the crisis in which Montenegrin society finds itself, and is supported by the opposition parties. The protesters demanded the withdrawal of changes to the Law on the President, an agreement on the election of judges of the Constitutional Court and the holding of early parliamentary elections. The third “Ima nas” protest took place on 28th November 2022, where protesters repeated their demands, saying that “Montenegro is not for sale”. Protesters sang the Montenegrin national anthem, carried flags of the United States and the European Union, and held placards with messages such as "For Montenegro, for the EU," "Nationalism is rampant and that's where the Constitution falls", "We will not prepare the suitcases" and the like. After the speeches by the protesters, they marched through Podgorica, and the rally ended without incident.

On 12th December 2022, hundreds of protesters again rallied under the slogan "We Are Many” in the capital. Clashes broke out between protesters and police following the adoption of the amended law giving the parliament's pro-Serbian, pro-Russian majority presidential powers. The move stripped the country's pro-Western president of a decisive role in appointing the prime minister. Protesters pelted police in front of the parliament building with rocks and signal flares, and attempted to break through a police barrier, before they were pushed away. The police used pepper spray to disperse the crowds. In the aftermath of the protest, the police identified 13 of the perpetrators responsible for possible criminal offences and misdemeanours and collected information from them.

The NGO LGBT Forum Progress filed 220 charges for hate speech against LGBTQI people at the Police Directorate of Montenegro, which took place between October 7th and 14th. Hate speech was detected in public comments on Facebook. There are no statistics in relation to LGBTQI+ persons generated by the state. Research shows that prejudice and discrimination against LGBTQI + people are widespread.

Statistical data available to the Ombudsman for Human Rights show that the prosecution of hate speech, as a special form of discrimination, is rare and that competent authorities prefer to apply provisions related to violations of public order and peace. Deputy Human Rights Protector Nerma Dobardžić explained that this somewhat reduces the harshness of the reaction to hate speech, bearing in mind the less harsh punishment in the Law on Prohibition of Discrimination.

Journalists, both women and men, are increasingly exposed to attacks, threats and intimidation. The guidelines for risk assessment during reporting are a step forward in ensuring and protecting their safety, concluded the conference "Challenges of Journalism: Stumbling Blocks for Democracy" organised on 28th October 2022. President of the Media Union of Montenegro (SMCG), Radomir Kračković, announced that SMCG will soon present guidelines for better protection of journalists from possible attacks.

On 2nd November, marking the International Day for ending impunity for crimes against journalists, the NGO Human Rights Action (HRA) recalled the worst crimes against journalists in Montenegro that have not yet been resolved, and appealed that attackers must be appropriately fined. The killed or attacked journalists, including Dusko Jovanovic, Tufik Softić and Olivera Lakic, were writing about organised crime and related connections with Montenegrin high officials. Earlier, in September 2022, the Government announced that it would ask for foreign experts' help in solving old cases of attacks on journalists, saying experts from the FBI and other intelligence services would be hired as consultants. No progress has been made as yet. The SafeJournalists network also launched a campaign #OSVETLI (#ShineALight) to raise awareness of the problem of impunity for attacks on journalists, which are present in all countries of the Western Balkans, with very few cases resulting in judicial process and punishment for the perpetrators.

Human Rights Action (HRA) strongly condemned the threats to "Vijesti" journalist Sinisa Luković for his journalistic work, which were sent to him through his daughter. The Police Administration filed a misdemeanour charge against an 18-year-old for threats sent to Luković’s daughter on the social network Instagram.

On 8th November 2022 the Ministry for Culture and Media published a call for public consultations on three draft media laws: Law on media, Law on audio-visual media services, and Law on the public broadcaster RTCG. They organised five roundtables with representatives of NGOs and media in Bjelo Pole, Berane, Bar, Tivat and NGO Media Center Podgorica. With its comments, Media Center calls for preventing political influences on RTCG right away, professionalisation of the institutions dealing with hate speech, stronger editorial and financial independence of local media in which local NGOs have a key role, and introducing minimum self-produced media content that would better respond to the needs of citizens.