Mexico: Frustration with government takes people to the streets more

Anger and protests over rising gender-based violence in Mexico more

Journalists and their families continue to face a dangerous environment more 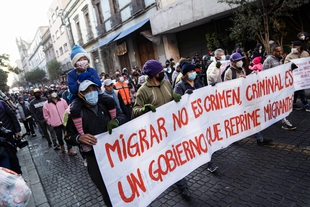 In November 2021, new court documents revealed that human rights defenders and a journalist who had prominent roles investigating a massacre in Mexico were criminally investigated by government authorities under a special organised crime statute.

In November 2021, new court documents revealed that human rights defenders and a journalist who had prominent roles investigating a massacre in Mexico were criminally investigated by government authorities under a special organised crime statute. Lawyer Ana Lorena Delgadillo, journalist Marcela Turati and anthropologist Mercedes Doretti were subjected to surveillance and had their communications, including phone calls and texts, monitored by government agents. They were leading figures investigating the killings of nearly 200 people in San Fernando, Tamaulipas, in 2011.

According to The Washington Post, which reviewed the court documents, there is no sign that the probe revealed any evidence of wrongdoing by the women and no charges were filed. “We were seeking justice, we were trying to prevent impunity,” Delgadillo said, adding the three women have filed a complaint against the Prosecutor’s Office. The investigation of the three women “is an extremely revealing case of a dysfunctional, incompetent judicial system that is routinely used for abuse of power,” said José Miguel Vivanco, the Americas director for Human Rights Watch.

Reporter Cecilia Reyna Solis Martin, who is enrolled in the federal programme to protect journalists, said she and her family have been threatened and harassed by police and unidentified assailants in Quintana Roo because of her reporting. For example, on 11th October 2021, a threatening message was found on the journalist’s car, which was parked outside her home. A month later, an unidentified person aimed a gun at her and a family member as they were driving in town. In another incident in November 2021, police allegedly harassed the reporter and a member of her security unit as they attended a press conference. The threats are related to her reporting of events on 9th November 2020, when officers of Benito Juárez shot at feminist protesters and reporters covering a demonstration, including Martin who was struck by a bullet.

Journalists with digital media outlet e-consulta in Puebla also denounced legal harassment by officials because of their reporting on local government and crime. Employees at the outlet said that on 10th November 2021 they received a summons from the Government of Puebla requesting multiple years’ worth of financial data and other documents. Failure to provide all the information could result in fines or the seizure of assets. This type of harassment has been used before against journalists in the region, according to Article 19.

According to data from the Committee to Protect Journalists (CPJ), Mexico remains the Western hemisphere’s deadliest country for the press. As of 1st December 2021, CPJ documented nine cases of journalists killed in Mexico alone. Of those, three were clearly targeted for their work. The organisation said that while deadly violence remains a major form of censorship in countries like Mexico and Colombia, the tactics for silencing journalists in Latin America and the Caribbean are evolving, appearing in legislation and court decisions across the region.

Data from Reporters Without Borders (RSF) also corroborates these findings. In a press conference in December 2021, spokespeople for the organisation said that for the third year in a row, Mexico was the country where they recorded the highest number of journalists killed. During the event, experts also highlighted widespread violence and cases of enforced disappearances of journalists. Sara Mendiola, of civil society group Propuesta Cívica, commented:

“Not a single case of a disappeared journalist in Mexico has been solved. We are at 100% impunity. As civil society organisations, our objective is to combat this crisis of impunity.”

On 25th November 2021, thousands of people joined large events and demonstrations in cities across the country to mark the International Day for the Elimination of Violence Against Women. Marches were held in Mexico City, Acapulco, Oaxaca, Chihuahua, Culiacán, Mérida, Cancún, Puebla, Tlaxcala, Morelia and Tuxtla Gutiérrez. “Girls are not to be touched, raped or killed,” read one sign. “He tried to strangle me and the Attorney General’s Office said it was [nothing more than] a family dispute,” read another sign.

While most of the demonstrations were peaceful, three people were killed at an event in Guaymas, Sonora, during an attack by gunmen allegedly targeting the police chief. Among the people killed were Marisol Cuadras, an 18-year-old activist, a security guard and one of the attackers. Authorities said a drug cartel was behind the attack and arrested 11 suspects.

On 20th November 2021, LGBTQIA+ groups marked the Transgender Day of Remembrance by organising demonstrations in Mexico City, Guadalajara, Monterrey and Puebla to protest discrimination and hate crimes. “We exist because we resist,” protesters shouted as they marched in Mexico City. There were reports of police officers harassing marchers to provoke them. “We already know that the police are never there to take care, but today demonstrates they are only there to create violence,” said trans and non-binary persons collective Hola, Amigue (Hi, Friend) on social media. In Mexico City, participants of the demonstration were surrounded by police officers, prevented from marching along an avenue and sprayed with gas.

On 27th November 2021, the collective “Luz de nuestros muertos” (“Light of our dead”) organised a march in Mexico City to demand justice for killings of members of LGBTQIA+ communities. They gathered in the city centre to remember those who were killed in hate crimes, placing flowers, candles and photographs. Protesters urged authorities to investigate these crimes and end impunity for them. They also denounced the lack of medication for persons living with HIV.

On 8th November 2021, people protested in Nogales in support of asylum seekers waiting at the border with the United States for the processing of their cases. Many in the crowd chanted and held signs with messages calling on the U.S. government to allow people to file their applications. Some migrants talked about the abuse and exploitation they experienced in their home countries and are currently enduring as they live near the border, waiting in limbo for the asylum process to restart. The protest took place as the U.S. reopened its borders to vaccinated tourists, after a year and a half of pandemic-related restrictions.

Separately, on 5th December 2021 Haitian migrants protested in front of the National Migration Institute in Monterrey, Nuevo León, to demand responses to their requests for work permits. Following the protest, some of the migrants were able to meet with Institute employees to discuss their requests.