CSO left out of participation process; media obstructed in reporting on event more

Calls for attacks on journalists to be addressed, amid impact on media sector due to COVID-19 more

Group protests against ‘false pandemic’ and 5G, while other protests are called off more 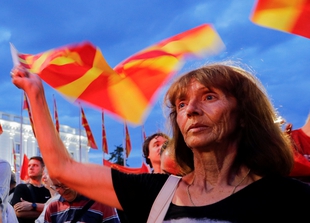 Protests were staged by educational staff demanding an increase in income in line with the minimum wage and with the current inflation in the country. Traditional May Day protests were also staged to mark this year's Labour Day on 1st May. Protests were held by several interest groups to demand a linear salary increase. Separately, journalists face intimidation, harassment and obstruction.

A public discussion took place on the legality of the establishment and institutional responsibility during the registration of the Association Cultural Centre, founded by Ivan Mihailov Bitola. According to the Central Registry, the association’s documentation was submitted in 2019, based on the provisions prescribed in the Law on Associations and Foundations. The institution stated that "in the recorded goals and programme of action there are no elements aimed at the violent collapse of the constitutional order, incitement and invocation of military aggression and inflaming of national, racial or religious hatred or intolerance." Contrary to the position of the Central Registry, the Minister of Internal Affairs publicly stated that the opening of the association is a “provocation” and that it will not lead to improving relations in North Macedonia. The Central Registry in North Macedonia is responsible for the administrative aspects of the registration of the entities (CSOs, enterprises, etc…). As long as organisations submit the required documentation, the Central Registry cannot decline to register an entity. In cases where entities to be registered contain the name of a person in the title, the registration requires evidence in the form of a statement issued by the Ministry of Justice that the person whose name is put in the title does not have living third generation heirs.

The Deputy Prime Minister responsible for good governance policies held a meeting with representatives from the Platform of Civil Organisations who fight against corruption. with a special focus on the process of preparing legislation on the origin of property and the reorganisation of the state administration, for which piloting is expected to begin in three ministries. In the official announcement, the government emphasised the importance of close cooperation with independent institutions and civil society organisations because of their expertise on certain issues which are important in the creation of future policies.

The State Department's 2021 annual report states that the country has made progress in respecting media freedom and freedom of expression in the country. However, it also states that the problems from previous years, such as violence and intimidation of journalists, and a slow and ineffective response from the authorities in the country to protect journalists and media workers remain. Almost all serious attacks on journalists for the last two years are noted and the problem of impunity for violence against journalists is also highlighted - an issue which the Association of Journalists of Macedonia has often raised in the past. In addition to this, the report noted that in the past year, the response of law enforcement authorities and judicial authorities to cases of violence and intimidation of journalists was slow and ineffective.

The Association of Journalists of Macedonia strongly condemned the threats made by Sadredin Elezoski, head of the Department of Urban Planning in the municipality of Mavrovo Rostusha, against IRL journalist, Maja Jovanovska. According to published information, a recording team visited the public enterprise National Park Marovo, during which the head of the Urban Planning Department in the municipality refused to meet with the journalists, even though the visit had been announced and confirmed. During a call between the manager and journalists, Jovanovska explained to him that they were still waiting for answers to the questions sent on 4th April 2022, to which he responded by directing insults and derogatory remarks at the journalist, threatening "Be careful from today. You will see what will happen to you if you come here." Despite the threats, the journalist stated that she would return the following week because the municipal administration owes answers on the illegal construction taking place in Mavrovo National Park.

The Association of Journalists of Macedonia and the Independent Union of Journalists and Media Workers reacted to the actions of the Basic Public Prosecutor's Office and the Ministry of Internal Affairs (MIA) after it opened a case following a report of hate speech by a citizen towards another citizen. As part of its investigation, the Prosecutor at the Skopje Prosecutor's Office issued an order to the Ministry of Interior to provide the broadcast audio and video materials from Telma Television. It also requested an informative conversation with the editor Vesna Jovanovska-Dojcinovska. The police questioned her at her home address several times, but without giving details about why exactly she should report to the police station.

On 24th May 2022, the Macedonian delegation led by Prime Minister Dimitar Kovacevski attended a working visit in Rome as part of the celebration of the Day of All-Slavic educators Saints Cyril and Methodius. The Association of Journalists raised concerns about the favouritism of individual media houses by the government, as during the visit select journalists and media workers from private media outlets were present to report on the event. There was no explanation from the government about what criteria were used and why exactly these media were invited.

The Association of Journalists asked the Ministry of the Interior to conduct an urgent internal investigation into the case of the journalist Sonja Kolevska-Delevska from the digital editorial office sakamadakaz.mk after she was called to an official interview at the Centar police station due to a published text, and following a complaint by the head of the Ministry of Justice.

The Basic Civil Court Skopje, as a court of first instance, ruled in favor of journalist Miroslava Burns after she filed a lawsuit for insult and defamation against Marjan Stamenkovski as the author and responsible editor of an internet portal which published a text on 18th March 2020. On 19th May 2020, the journalist submitted a request to the internet portal for a public apology and withdrawal of the text, which it did not act upon and continued to publish insults and slander against her.

On 31st May 2022 in Skopje, the conference "Dealing with disinformation in the Republic of North Macedonia" was held, organised by the Metamorphosis Foundation and dedicated to building a multi-sectoral approach to solving the problem of disinformation through the joint engagement of state institutions, independent media, civil society organisations, the academic community and the private sector.