New collaboration seeks to counter disinformation in the media more

Legal reforms on court reporting rejected by the President more 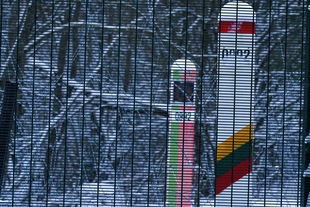 On 7th November 2022, Interior Minister Agnė Bilotaitė said her ministry had drafted amendments to legalise the decision not to admit migrants in the event of an extreme situation or a state of emergency, including wartime. Lithuania’s pushback policy and the way it treats people on the move has previously been criticised by human rights advocates, NGOs, and even the EU's border guard agency, Frontex. Separately, on 22nd October 2022, the conservative, anti-LGBTQI+ organisation Family Movement organised a rally allegedly “to defend the Constitution”.

On 7th November 2022, Interior Minister Agnė Bilotaitė said her ministry had drafted amendments to legalise the decision not to admit migrants in the event of an extreme situation or a state of emergency, including wartime. The amendments are expected to enter into force in January 2023 after being approved by the government and adopted by parliament. Currently, border guards exclude migrants on the basis of an order from the Minister of the Interior. "There is an emergency situation in Lithuania, and the fact that a person arrives without shoes, not warmly dressed, is not a reason for him to enter the Republic of Lithuania," said Bilotaitė.

Lithuania’s pushback policy and the way it treats people on the move has previously been criticised by human rights advocates, NGOs, and even the EU's border guard agency, Frontex. As reported earlier on the CIVICUS Monitor, the international humanitarian organisation Médecins Sans Frontières criticised the Lithuanian government, arguing that their pushback policies cause mental and physical suffering to people on the move. Amnesty International in its latest report highlighted the stark contrast between the treatment of people fleeing the war in Ukraine and people fleeing from the Middle East and African continent.

Another tightening of immigration rules has affected citizens of "hostile countries", mostly Russians and Belarusians. The changes introduce requirements to provide additional documents or information for "certain categories" of foreigners applying for a visa, residence permit or residence card for a family member of an EU citizen. The Interior Minister called for special attention to persons with Russian and Belarusian citizenship, including those who previously had Lithuanian citizenship. The Interior Ministry is also planning to put forward amendments that would allow foreign nationals to be deprived of their residence permits and Lithuanian citizenship.

Additionally, since September 2022, Lithuania has been closing refugee camps. This is due to the fact that many who enter Lithuania, including from the border with Belarus, then move to the West. Camps have already been closed in Rukla and Medininkai. Soon another one will be dismantled in Pabrade. According to official statistics, there are now six times fewer migrants in Lithuania compared to January 2022. The State Border Guard Service (VSAT) stated that over 300 irregular migrants, who have entered since the start of the migrant influx last year, are still in Lithuania.

On 22nd October 2022, the conservative, anti-LGBTQI+ organisation Family Movement organised a rally allegedly “to defend the Constitution”. The Vilnius authorities issued a permit for 15,000 people to attend. In the end, around 1,000 protesters gathered on Cathedral Square. Police presence was stepped up and the buildings of the parliament and the prime minister’s office were fenced off. While the participants did not clearly state their demands, they expressed their dissatisfaction with new policies to allow ethnic minority citizens of the country to use the original spelling of their names in documents. They also spoke out against the Civil Union Law discussed in the parliament.

As previously reported on the CIVICUS Monitor, the Family Movement held anti-LGBTQI+ rallies back in 2021. Raimondas Grinevičius, the leader of the Family Movement, stated: "We would like to point out that the articles of the constitution are meaningless for the members of the Seimas and the current government, the constitution has been turned into worthless piece of paper. Take any field – medicine, education, human rights". Viktorija Čmilytė-Nielsen, the Speaker of the Parliament, said that the Family Movement seems to have run out of ideas to attract supporters, pointing out the difference between the declared participants and the number of people who actually came to the protest.

On 10th October 2022, the rally in support of Ukraine was held on Cathedral Square in Vilnius. It was initiated by the Ukrainian Embassy in Lithuania, after Russia's massive attack with 84 missiles on Ukraine earlier the same day.

Amendments presented by the Culture Committee in the Seimas, the parliament of Lithuania, which aim to reorganise the Lithuanian media’s self-regulation body – the Public Information Ethics Commission (VIEK), drew fierce criticism from media representatives. As opposed to the model working group established in 2021, according to the new model of the Culture Committee, a large part of the media sector would not be able to participate in the Ethics Commission. Media groups insist new proposals would hurt media freedom and independence since new proposals were agreed upon only with LRT - one of the biggest state-owned public broadcasters, and all the others were ignored. More than 600 media representatives appealed to the parliament to either return to the concept of VIEK transformation agreed upon in the Seimas working group or not change the existing model at all. On 24th November 2022, BNS reported that the Seimas decided to indefinitely postpone consideration of the new model of self-regulation of journalists.

Peaceful assembly is protected in Lithuania however organisers of gatherings of more than 10 persons must notify the police in advance.

Article 36 of the Lithuanian constitution states that “citizens may not be prohibited or hindered from assembling unarmed in peaceful meetings.” The law regulating assemblies is in line with the international standards. The organisers of protests of more than 10 people ought to notify the authorities in advance. The right to freedom of peaceful assembly can be limited when the security of the state or the rights of other persons are at stake. There are two somewhat nonstandard limitations put on the freedom of assembly: the protesters are prohibited from violating the “morals with their appearance or things they possess or demonstrate” and the are not to demonstrate soviet/communist/nazi symbols. Public opinion is divided on equal rights for LGBTI people, and this manifested itself in 2013 when a gay pride march was disrupted by counter-demonstrators. In the past, Lithuanian parliamentarians also tried to overturn a permit for the gay pride march, Baltic Pride, in the capital. Other recent protests concerned opposition to government plans to accept over 1,000 refugees in Lithuania, low milk prices and the proposed reduction of social benefits for employees. Although these protests were all well-policed, research in 2012 suggested a trend in Lithuania towards an increasingly authoritarian approach to the policing of ‘political’ protests, particularly those held in the wake of austerity measures. On the whole, mass protests are relatively infrequent in Lithuania.