Protests staged by Kosovo Serbs and the SDP party more

Protesters gather in support of President Hashim Thaci, who is accused of war crimes more

Victory in name only for environmental CSOs more

Amendments to law governing freedom of association are dropped more 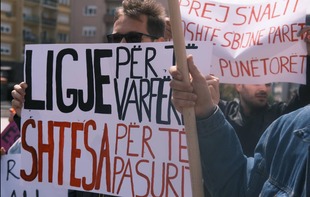 Other protests in the reporting period

Kosovo moved up 17 places in the Reporters Without Borders’ 2022 World Press Freedom Index rankings, climbing to 61st place. The report highlights that no journalists or media workers are currently imprisoned in Kosovo. However, among limitations on the freedom of expression the report also underlines partisan distribution of public funds, insults, threats and physical attacks on journalists, as well as interference by politicians and business groups. Furthermore, the intimidation of Serbian-speaking journalists in northern Kosovo by the ruling party Srpska Lista is also emphasised as a concern in the report.

Improved ranking on Freedom in the World report

Kosovo improved by two points on Freedom House’s annual report on freedom in the world, moving up from 54 to 56 points out of 100. The increase was attributed to the political rights category, which improved from 23 points in last year’s report to 25 this year, while the assessment of civil liberties remained the same, with 31 points out of 60 in total. However, the report still ranks Kosovo among partly free countries.

The U.S. Department of State released the 2021 Kosovo Country Report on Human Rights Practices, which emphasises that although the government generally respected the freedom of expression during 2021, “credible reports persisted that some public officials, politicians, businesses, and religious groups sought to intimidate media representatives”. Among limitations on the freedom of expression, the report underlines funding problems, difficulties in accessing information from public institutions, threats, as well as fear for physical safety or job security faced by journalists due to certain critical investigative reporting. Furthermore, the report highlights the Association of Journalists of Kosovo's reports on 26 physical assaults and verbal threats toward journalists marked throughout 2021.