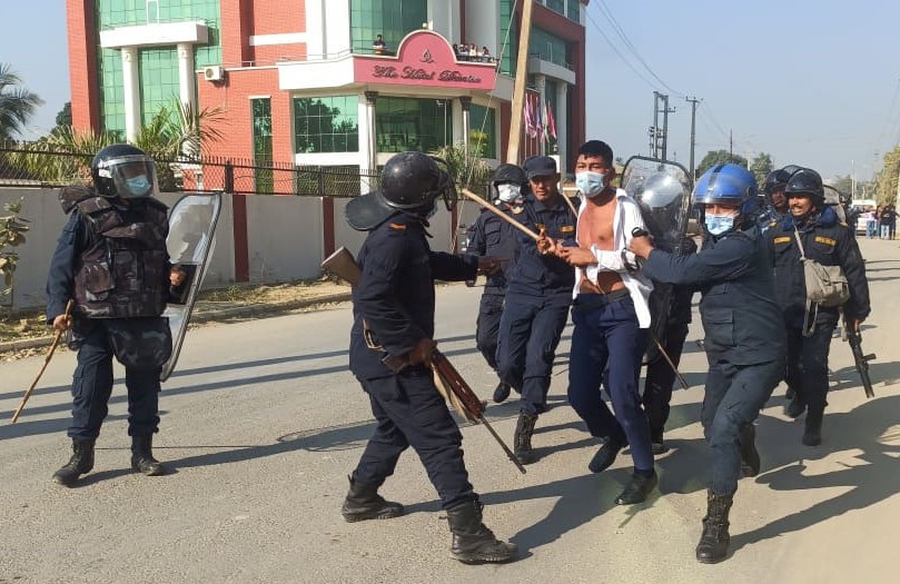 The state of civic space in Nepal is rated as ‘obstructed’ by the CIVICUS Monitor. Documented violations of fundamental freedoms include arbitrary arrests and the use of excessive force with impunity during protests, as well as the ongoing targeting of journalists including through harassment, attacks and criminalisation.

A former Maoist leader, Pushpa Kamal Dahal - otherwise known as Prachanda - who led a decade-long rebellion against Nepal’s monarchy, was appointed prime minister for a third time in December 2022, in alliance with the main opposition Unified Marxist-Leninist (UML) party after the elections in November 2022 returned a hung parliament.

The new coalition came hours after Prachanda surprisingly walked out of the ruling alliance led by Nepali Congress leader Sher Bahadur Deuba, whose party emerged as the single largest party after the 20th November 2022 polls, and who refused to back Prachanda for the prime minister’s job.

Prachanda’s Maoist Centre party won 32 seats in the 275-member House of Representatives. The UML has 78 seats, and the rest will be controlled by smaller groups. He will head the new government for the first half of the five-year term.

On 14th November it was reported that the Geneva-based Global Alliance of National Human Rights Institutions (GANHRI) had downgraded the National Human Rights Commission (NHRC’s) status to 'B’, raising questions on the legality of the appointment of NHRC office bearers (members and its chief) and their work. According to Freedom Forum, the KP Sharma Oli-led government had appointed the Chairperson and Members of the NHRC, breaching the constitution in 2020. Similarly, the KP Oli-led government made attempts to curtail the role of the NHRC while amending the NHRC Act.The human rights body had retained its 'A' status since its inception for performing its duties in an autonomous, independent, neutral and impartial manner.

In recent months, the police used excessive force to disperse a protest in Dhangadhi, while there were concerns around attacks on press freedom around the election and an increase in the number of journalists affected by press freedom violations in 2022.

Police use tear gas to disperse protest in Dhangadhi

Following the death of a student, there were concerns that police imposed unnecessary restrictions and used excessive force to disrupt a protest in Dhangadhi.

On 1st December, a grader, a form of heavy equipment, hit a schoolgirl in the Dhangadhi city of the Kailali district in Sudurpaschim, killing the minor on the spot. The child was cycling to her school when the accident occurred. Following this, protests erupted in the city with protesters demanding action against the driver and compensation for the family of the deceased.

A prohibitory order was then issued by the Kailali District Administration Office barring people from protesting. Despite this, locals and students still protested disregarding the prohibitory orders. In response, police reportedly fired tear gas to disperse the crowd. Around 11 people were arrested during the protest.

Attacks on press freedom around elections

#Nepal🇳🇵 :The Election Commission of Nepal (ECN) and the Press Council Nepal (PCN) have been criticised for ongoing attacks on press freedom in the lead-up to Nepal’s parliamentary and provincial elections.@IFJGlobal https://t.co/r3WnmScvyH

In November 2022, the Election Commission of Nepal (ECN) and the Press Council Nepal (PCN) were criticised for ongoing attacks on press freedom in the lead-up to Nepal’s parliamentary and provincial elections.

In an incident of censorship, the PCN issued a letter to Nagarik Daily on 20th October 2022 requesting an explanation behind the publication of a satirical cartoon of ex-Prime Minister and Communist Party of Nepal Chair KP Sharma Oli, which the council claimed violated journalistic and electoral codes of conduct. The decision was criticised by press freedom agencies and the FNJ.

On 25th October 2022, the ECN threatened the operators of a Facebook group titled ‘No Not Again’ with a potential prison sentence of five years, accusing the Facebook group of ‘spreading propaganda’ and inciting ‘hate-speech’ through its negative publicity. The Facebook page, and subsequent social media campaign, have advocated for voters not to elect established political figures. On 6th November, the Supreme Court issued an interim order against the ECN, ordering the commission to cease its actions against the campaigners.

On 4th November 2022, the news portal Setopati published news that Nishan Kharel, the son of former Law Minister and election candidate Agni Kharel, had retained Nepali citizenship and voting rights in Nepal despite active service in the United States Army. On 5th November, the Election Commission of Nepal (ECN) ordered the news portal Setopati to delete the article within 24 hours, deeming the story defamatory and in violation of the electoral code of conduct. The ECN’s move invited criticism from the media and media rights organisations, who questioned the justification behind the order. The ECN rescinded its order on 7th November.

According to Freedom Forum, in its annual media report 2022 published on 31st December 2022, a total of 45 incidents of press freedom violations occurred in Nepal over the year, where 120 journalists were directly affected. While the number of violations declined from the previous year, the number of affected journalists increased.

The groups said 109 male and 11 female journalists were affected and that there was little progress in addressing impunity for crimes against journalists. Among the violations documented were arrest and detention, attacks, obstruction and threats to life.