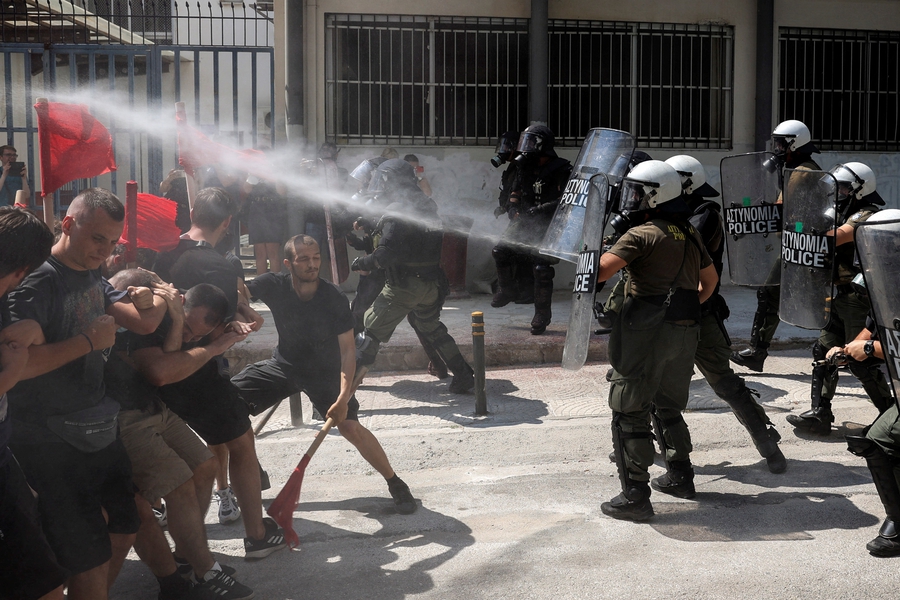 In late July 2022, it was revealed that the Greek secret service had attempted to bug the phone of Greek socialist leader and MEP Nikos Androulakis (President of centre-left, the third largest opposition party) with the illegal spyware Predator. Within days, Androulakis found out that the National Intelligence Service (EYP) had wiretapped his phone via his mobile provider. After the revelations Panagiotis Kontoleon, the leader of EYP, and Grigoris Dimitriadis, the nephew of the prime minister and the secretary general of the prime minister's office to which the EYP reports, resigned. Prime Minister Kyriakos Mitsotakis (New Democracy) said that he was unaware of Androulakis’ phone being bugged. According to Politico, before the spying revelations surfaced, New Democracy and Pasok were seen as heading toward forming a centrist coalition government after the upcoming elections.

Separately, during August 2022, Athens had been repeatedly accused of illegally pushing back refugees to Turkey. In late July 2022, on the occasion of a visit to Greece, German Foreign Minister Annalena Baerbock called for an investigation into pushbacks at EU borders.

In July 2022, Athens conservative mayor Kostas Bakoyannis, the nephew of Prime Minister Kyriakos Mitsotakis, urged the ministers of interior and citizens’ protection, Makis Voridis and Takis Theodorikakos, to grant the capital’s municipality the right to license any demonstration or open-air gathering. Bakoyannis believes that the city centre of Athens suffers from disruption, vandalism and rubbish left behind as a result of protests.

Big demonstration in Athens this evening against the deployment of university police on Greek campuses. A protest is also underway in Thessaloniki #πανεπιστημιακη_αστυνομια #Greece pic.twitter.com/xk1mjpcglB

State of media freedom, new legislation in the pipeline

In July 2022, the European Commission released its annual Rule of Law report. The country chapter on Greece called attention to the potential political influence on public media, the deteriorating professional environment and rising violence against media workers. The concerns echo the concerns journalists and media rights groups have been raising for the past few years. Greece is currently the lowest-ranked EU member state on the Reporters Without Borders' (RSF) annual World Press Freedom index.

As reported by Politico, as of September 2022, a new controversial regulation is currently in public consultation. The new legislation would create a committee to monitor whether the principles of journalistic ethics and conduct have been observed. If the committee finds that they were not, they can remove the given media organisation from the registry and exclude it from state funding for two years. As state funding is one of the most important sources of income for Greek media, the introduction of this legislation would likely lead to further heavy self-censorship. Greece already has a “fake news” law according to which publishing reports “capable of causing concern or fear to the public or undermining public confidence in the national economy, the country’s defence capacity or public health” may be punishable with five years in prison.

I am seriously wondering if the Turkish and Greek governments are in a secret competition to see who can harm #MediaFreedom more in their countries.

Mitsotakis administration is bringing a new bill about a new censorship committee against online media.https://t.co/3xQ3WY5D3q

Abusive legal proceedings against journalist spied on with Predator

On 5th August 2022, the former secretary general of the prime minister's office and nephew of the prime minister, Grigoris Dimitriadis launched abusive legal proceedings against journalists Thanasis Koukakis, Nikolas Leontopoulos and Thodoris Chondrogiannos, as well as against the website Reporters United and the newspaper EfSyn.

According to Maja Sever, President of the European Federation of Journalists (EFJ), the complaints filed are “only intended to intimidate the press and prevent the exposure of the illegal and undemocratic practices of those in power in Greece.”

As previously reportedon the CIVICUS Monitor, Koukakis, who investigated alleged money laundering and corruption in the banking sector, has been spied on with illegal Predator spyware. The National Intelligence Service (EYP) first denied its involvement.

Earlier on 29th July 2022, the former director of EYP, Panagiotis Kontoleon, admitted to a parliamentary committee that EYP had spied on Koukakis from 15th May to 12th August 2020. As EFJ reports, it was later learned that Koukakis had also been monitored by the Predator spyware a year later, from 12th July to 24th September 2021. EFJ General Secretary Ricardo Gutiérrez called the obstruction of the work of journalists a crime against democracy:

“We call on the Greek judicial authorities to activate judicial investigations into private and public actors, including those close to the Prime Minister, who use Predator software to spy on journalists. We call on them to shed light on the illegal tapping of journalists by the intelligence services and to identify and convict those responsible. Journalism is not a crime, but obstructing the work of journalists is a crime against democracy.”

The Supreme Court’s Prosecutor issued an arrest warrant against journalist Petros Kousoulos for publishing confidential documents on the national intelligence service’s surveillance of two former officials in 2016. Kousoulos said that for him it was “unthinkable that in 2022, in a well-organised country like Greece, a journalist would be prosecuted for simply doing his job.

“I was surprised at the decision of the Prosecutor’s Office, which instead of shedding light on the case and finding the real culprits, issued a warrant for my arrest. All this is a violation of the freedom of the press”- Journalist Petros Kousoulos.

“The attempted criminalisation of journalism aims at intimidating those journalists who in future make similar revelations about the wiretapping scandal. The journalist’s job is to publicise and inform public opinion,” - Vangelis Triantis, a legal editor at the Greek media outlet Documento, told BIRN.

On 13th July 2022, the office of news outlet Real News and radio Real FM was set on fire. Following the explosion of gas canisters in the exterior stairwell, employees working in the building needed to be evacuated. Several people were hospitalised with respiratory problems. According to media reports, it took two hours for 18 firefighters to put out the fire.

The Journalists’ Union of Athens Daily Newspapers (JUADN) condemned the attack on press freedom and called for an investigation.

“When the media is set on fire, when the state cannot solve crimes against journalists and the media and bring perpetrators to justice, when groups aiming to intimidate, silence or control the media act without restraint, democracy is at risk.”

The Media Freedom Rapid Response (MFRR) urged the Greek government to strengthen the protection and safety of journalists.

On 30th June 2022, the Judicial Council of the Supreme Court acquitted four journalists who unveiled the Novartis pharmaceutical scandal,finding that the allegations against them were baseless. The four journalists, Kostas Vaxevanis, an investigative journalist of Documento, Ioanna Papadakou, a former investigative journalist at To Vima, Ioannis Filippakis, publisher of Dimokratia, and Alexandros Tarkas, reporter at Dimokratia, were facing criminal charges, which included alleged membership of a criminal organisation and three accounts of conspiracy. They each faced a prison sentence of up to 20 years.

As Media Freedom Rapid Response (MFRR) reports, “these criminal charges were among the most serious levied against members of the press anywhere in the EU at that time.” The partner organisations of the MFRR expressed concern at “the pressure faced by the journalists during the proceedings. Comments made by certain politicians and in particular Prime Minister Kyriakos Mitsotakis – who referred to some of the journalists as a “gang” in parliament – were deeply regrettable.”

As previously reported on the CIVICUS Monitor, the Greek government was heavily criticised for its lack of transparency in the allocation of its anti-COVID-19 promotional funds in early 2020. Following mounting pressure, the government released a list of all the media that received the funding (the so-called “Petsa list”). The list showed that critical media received less than one percent of the total spending and neutral media received far less than pro-government outlets.

However, the list did not contain all the information human rights watchdogs requested.

In early 2020, Greek NGO Vouliwatch submitted requests to the government’s General Secretariat for Information and Communication (GGEE) for information about which media were included, how much each received, and the criteria used by Initiative Media, the company hired to administer the project. GGEE repeatedly rejected the requests. Vouliwatch appealed to the National Transparency Authority (NTA), which rules on such cases. However, NTA ruled that the documents can be kept secret. The watchdog appealed to the courts, and although in January 2022 the Athens Administrative Court of Appeal recognised Vouliwatch’s right to receive the documents requested, the NTA informed Vouliwatch that despite the court decision, it does not recognise Vouliwatch’s legitimate interest in receiving the documents and will not compel GGEE to release them.