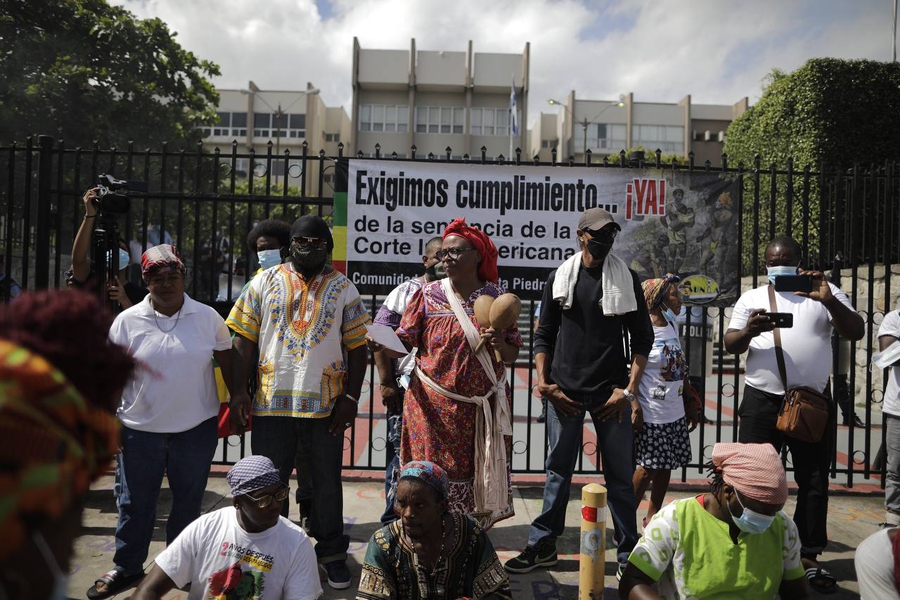 On 9th August 2022, the International Day of Indigenous Peoples, about 300 Indigenous and Garífuna protesters joined a march in Tegucigalpa toward the headquarters of the Public Prosecutor’s Office, organised by Organización Fraternal Negra de Honduras (Black Fraternal Organisation of Honduras - OFRANEH). They demanded action to locate the young Garífuna men who were forcibly disappeared in Triunfo de la Cruz in July 2020. During the demonstration, some protesters peacefully entered the facilities of the Public Prosecutor’s Officer and stayed for about two hours. They requested to meet with a representative of the public institution but were refused.

On 17th August 2022, the Public Prosecutor’s Office announced they had filed a criminal investigation against OFRANEH coordinator Miriam Miranda and human rights lawyer Edy Tábora, a co-founder of legal aid group Bufete Jurídico Justicia para los Pueblos (Justice for the People’s Law Firm) and member of SUNLA, a civil society committee working on the Triunfo de la Cruz case. Miranda and Tábora were accused of “disturbance of the public order” and “unlawful deprivation of liberty” under the Penal Code, which may carry prison sentences of up to three and seven years respectively. According to OFRANEH, other leaders who participated in the protest were also under investigation.

On 19th August 2022, the Office of the United Nations High Commissioner for Human Rights in Honduras expressed concern about the case against Miranda and Tábora. They recalled that the work of human rights defenders is fundamental in a democracy and urged the State to refrain from criminalising them for their work. On 24th August 2022, members of OFRANEH organised a protest in front of Honduras’ Supreme Court and filed a writ of amparo against Public Prosecutor-General Óscar Chinchilla and his deputy, Daniel Sibrián. Miranda said: “today we are filing this writ for breach of duty of the officials, who move quickly against us, but do not act in the case of the disappeared comrades”.

#Honduras: Sonia Pérez López (@nsouthwick) faces criminal charges on accusations of trespass & private property damage after reporting on evictions of Indigenous people in San José. #CFWIJ denounces the charges & stresses that the law must not be abused to silence the press. pic.twitter.com/eW6VY4oz1C

On 22nd May 2022, a landowner in the municipality of San José, La Paz, filed a criminal complaint against journalist Sonia Pérez López, accusing her of trespassing and of damage to private property. Pérez is a correspondent for broadcaster Radio Progreso. In the complaint, which the Committee to Protect Journalists reviewed, the landowner alleged that Pérez had trespassed on his property earlier in May 2022, while covering an eviction of dozens of Indigenous people of the Nueva Palestina community from the area. The complaint also targeted 30 members of the community, and alleged that Pérez was a member of the Nueva Palestina Indigenous Council. In the initial hearing, the court prohibited Pérez from leaving the country and ordered her to report to the judiciary every 30 days while the case was ongoing. On 29th July 2022, Radio Progreso reported that a local court had dismissed the case against the journalist and the members of Nueva Palestina.

On 8th June 2022, the mayor of Danlí, in the El Paraíso department, ordered the suspension of six television channels whose operating licences had expired or which had failed to pay local taxes and fees. As a result, Aviva TV was taken off the air. According to free expression group C-Libre, the news media is owned by journalist Jaime Nery Diaz and has maintained an independent editorial line, covering allegations of mismanagement of public funds in the municipality as well as complaints regarding increases in taxes and fees. C-Libre and journalists’ network Rapcos condemned the local government’s actions, pointing out that municipalities do not have authority to shut down media outlets and can resort to the judicial system to collect on taxes. The group called on the mayor’s office to suspend the closure order and to compensate for damages the population and companies affected.

In August 2022, local and international press groups warned that staff dismissals were jeopardising the functioning of the national mechanism for protecting human rights defenders and journalists in Honduras. According to Reporters Without Borders (RSF), in just a few months, more than two-thirds of the National Protection System’s technical staff were dismissed, generating an almost total paralysis in the implementation of its protection provisions. José Antonio Velásquez, the head of the mechanism’s prevention unit, and Danilo Morales, who had been its director since 2018, were fired on 22nd April 2022 after being allegedly subjected to “repeated attacks”. On 12th August 2022, 14 employees of the system were fired. Those dismissed included the system’s interim director, Cristobal Martínez, and many other senior staff members.

The National Human Rights Commission (CONADEH) issued a statement saying they had launched an investigation into alleged power abuses in the management of the Protection System. CONADEH stated that public administration decisions regarding procedures, selection of personnel, and adequate labour guarantees for employees of the Protection System should be in accordance with international human rights standards.

In response to criticism, Human Rights Secretary Natalie Roque said the mechanism was being restructured because of complaints regarding irregularities, including claims that staff members had breached confidentiality, removed documents and improperly processed the information of persons under protection measures.

On 18th August 2022, RSF said on Twitter that their correspondent in Honduras, Dina Meza, was facing harassment, threats and surveillance for speaking out about the protection system. On 23rd August 2022, the Inter American Press Association (IAPA) called on the government of Honduras to review these changes to the mechanism. The group said they had been following the decisions closely and considered that the dismissals could be motivated by political attitudes and not by professional and technical skills, an aspect that would deepen the deficiency of the system in protecting journalists.

On 14th July 2022, a group of individuals presenting themselves as police officers attempted to seize materials from civil society group Asociación por una Ciudadanía Participativa (Association for Participatory Citizenship - ACI Participa) in Tegucigalpa. Without presenting any court order, documents or uniforms identifying them as members of the police, the individuals demanded that the organisation hand over videos from their security cameras. The staff refused to comply and blocked the alleged officers from entering the office. They then withdrew but remained in the surrounding areas for about an hour. The Observatory for the Protection of Human Rights Defenders expressed concern about the incident, noting that ACI Participa and its members have been systematically subjected to attacks, threats, intimidation and break-ins.