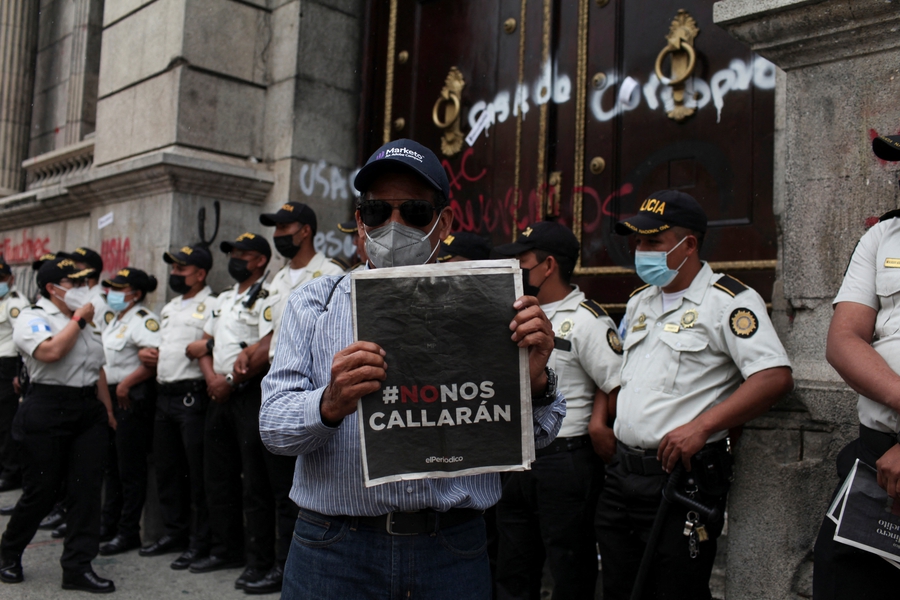 On 29th July 2022, journalist José Rubén Zamora, president and founder of newspaper elPeriódico, was arrested by police as part of an investigation for alleged extortion, money laundering and influence peddling. Authorities raided the newspaper’s offices, forcing about 30 employees out of the building while others had to remain inside the offices all night with their phones taken away. The Association of Guatemalan Journalists (APG) condemned the government’s actions and claimed that the office raid was carried out “to censor the Saturday print edition of elPeriódico.” The newspaper has reported on several allegations of corruption within the Giammattei administration, including within the prosecutor’s office. Zamora’s home was also raided, and elPeriódico’s bank accounts were frozen.

Zamora is a beneficiary of precautionary measures granted by the Inter-American Commission on Human Rights (IACHR) due to previous attacks on him and his family.The IACHR’s Special Rapporteur for Freedom of Expression, Pedro Vaca, called on authorities “to ensure compliance with rights and judicial guarantees”.

On 30th July 2022, journalists and other supporters protested Zamora’s arrest in front of courthouses in Guatemala City. The arrest also sparked criticism from civil society and press organisations, who said the prosecution is an act of retaliation against Zamora and elPeriódico’s reporting and criticism of government. On 9th August 2022, the journalist was charged and placed in pre-trial detention. The judge ordered prosecutors to present evidence by 9th November 2022 and set the next hearing in the case for 8th December 2022.

On 19th August 2022, Guatemalan police arrested elPeriódico’s financial manager Flora Silva after a raid on her home. Silva was arrested in connection with the criminal investigation of Zamora. The Committee to Protect Journalists (CPJ) reported that she was transferred to a hospital later in the day due to high blood pressure, and remained there until 23rd August, when she was transferred to the Mariscal Zavala prison to await the preliminary hearing in her case.

On 4th August 2022, Guatemala’s Congress approved a Law on Prevention and Protection Against Cybercrime (Decree 39-2022). The legislation defines criminal offences carried out through computer systems or systems that use information technologies and establishes actions to safeguard people’s data and prevent cyberattacks. Critics said the legislation has important definition gaps that leave room for interpretation and may be used to restrict freedom of expression. For instance, the law could be used to censor some satirical images such as memes or to criminalise the sharing of public interest information on public officials.

Juan Pappier, a researcher with Human Rights Watch, commented that the law contains vague provisions which could be used to conduct abusive criminal prosecutions. He said: “In a country where justice has been instrumentalised to persecute independent journalists, prosecutors and judges, this law can be used to harass critics.” Journalists’ associations also expressed concern about the law, saying some of its articles could be used to criminalise journalistic work, affecting for instance investigations based on data leaks – which have often led to the exposure of corrupt practices.

On 12th August 2022, an opposition group presented objections to the legislation, saying aspects of the law must be discussed in Congress before the initiative is sent to the Executive to be sanctioned.

In July 2022, the APG published a report analysing freedom of expression in the country during the first semester of 2022. The APG registered 66 cases of violence against members of the press and restrictions on journalistic work. Security agents were identified as the perpetrators in seven cases of physical attacks recorded in the first half of 2022. Other public authorities were responsible for 30 of the violations registered. There were cases of intimidation, criminalisation, judicial harassment and stigmatisation.

In one case of access to information restriction, the police refused think tanks’ request for official disaggregated data on violence, arguing that the information was confidential. According to Prensa Libre, this type of information has been released to the public over the past 20 years. The APG also underscored that since the beginning of his government, Giammattei has repeatedly imposed rights limitations by declaring emergencies under the “Public Order Act” to respond to security issues.

In the report, UDEFEGUA also noted that there were 2,057 attacks against human rights defenders, organisations and communities in the first two years of the Alejandro Giammattei government (January 2020 – January 2022). This represents a substantial increase in violence compared to the previous government administration. During the four years of the Jimmy Morales government, there were a total of 1,642 attacks on HRDs registered by the organisation.

On 20th August 2022, Jordán Rodas Andrade finished his term in the role of Human Rights Ombudsperson. UDEFEGUA coordinator Jorge Santos said Rodas had expanded the Ombudsperson’s reach, establishing offices to investigate disappearances, especially cases with suspected involvement of security forces, and to defend freedom of expression and human rights defenders. Santos expressed concern about the maintenance of the role’s independence in the future. Throughout his term, Rodas was outspoken in defence of LGBTQIA+ and women’s rights and allied himself with anti-corruption efforts, which led to confrontations with political figures and made him a target of harassment.

In early August 2022, protesters marched in Guatemala against the rising cost of fuel and the basic food basket, corruption and the detention of human rights defenders and journalists. On 9th August, social movements and Indigenous organisations blocked several roadways across Guatemala. On 11th August, hundreds of people joined marches in different areas of Guatemala City holding banners with messages such as “Let’s take to streets. They won’t silence us” and “Stop the dictatorship.”

On a related note, on 9th August 2022 Congress held a first debate on the “Law for the Strengthening of the Public Security Forces and the Guatemalan Army,” known as Bill 6076. Experts said the bill tramples on several legal principles regarding the use of force by state agents, allowing the use of force in demonstrations without clear justification, establishing that officers prosecuted for abuses in the performance of their duties would have free legal advice and that they would be granted alternative measures to prison terms. Several parliamentarians spoke out against the initiative saying it was anti-democratic and unconstitutional, but the bill nevertheless advanced to a second debate.

On 17th August 2022, when the bill’s second debate was due to take place, Indigenous leaders from Totonicapán condemned Bill 6076 in an event at Congress. They demanded the bill’s archival, arguing it would endorse violent repression against protesters by security forces. The debate on the initiative was suspended and on 23rd August the congressional board of directors announced that the bill would be archived.