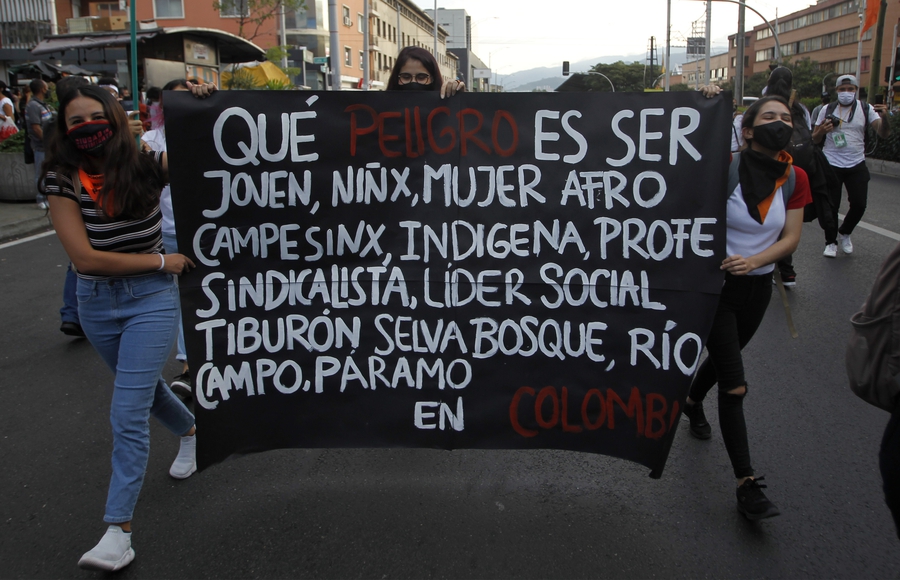 On 19th July 2022, Gustavo Petro of the Pacto Histórico coalition was elected President of Colombia in a closely contested run-off. Petro is an economist with a long career in politics, who is also well-known for being a former member of guerrilla movement M19. He was previously the mayor of Bogotá, a senator, and a representative in the lower chamber of Congress. Petro’s vice-president will be Francia Márquez, a human rights and environmental defender who campaigned against illegal mining in traditional lands of the Afro-Colombian community La Toma. They were sworn in on 7th August 2022.

On 26th July 2022, the UN Human Rights Office published a report on the rising violence in rural areas of Colombia. According to the study, violence fell dramatically after the signing of the Peace Agreement with the Revolutionary Armed Forces of Colombia (FARC) in 2016, but increased again as non-state armed groups and criminal organisations expanded their presence, particularly over the past two years. The violence perpetrated by these groups is having a devastating impact, particularly on women and children, Indigenous peoples, Afro-descendants, community leaders and human rights defenders. The UN Human Rights Office in Colombia said it had verified the killing of 100 human rights defenders in 2021. In the first six months of 2022, the Office received information on 114 killings of human rights defenders.

According to the study, the state response based predominantly on militarisation has failed to stop the expansion of illegal armed groups. The UN body called on the Colombian government to boost rural development and to take steps to encourage members of the illegal groups to disband and dearm. Juliette de Rivero, the UN High Commissioner for Human Rights’ representative in Colombia, said:

“The state’s security strategy must focus on protecting the civilian population and on prevention by tackling the structural causes of violence”.

On a related note, civil society organisations reported that at least 20 Indigenous defenders and local community leaders had been killed between May and June 2022. Some of these cases are detailed below:

On 14th May, two Indigenous leaders were assassinated in separate violent incidents. Embera Eyábida defender Socio Fernando Domicó was a musician and teacher who lived in the Choromandó reserve, Antioquia, where he participated in several community projects. Edgar Quintero was shot and killed as he left his home in Lomitas, Santander de Quilichao municipality in Cauca. He was the former president of the Lomitas Community Action Junta, and had led and participated in local programmes for community reparation and land restitution.

Community Action Juntas are local civic organisations created to promote development in specific territories. There were several similar cases when leaders of these organisations were killed across the country in May and June 2022, including Alexander Espinosa Valencia in Valle del Cauca; Elizabeth Mendoza in Tolima; Alconides Vallejo Álvarez and Danilo de Jesús Madrid López in Antioquia; Jhon Jerson Camacho Barrera in Arauca; Harold Vicente Herazo Castaño in Córdoba; and Roberto Carlos Ribas in Cauca.

On 31st May 2022, Edison Gómez Ortiz, a teacher and Murui Indigenous leader, was found dead shortly after armed groups threatened his community in Solano, Caquetá. The threats were related to community members’ participation in elections. Ortiz was a defender of the right of Indigenous children to differentiated education.

On 7th June 2022, Afro-Colombian leader Jesusita Moreno of the Noanamá community was killed in Cali, Valle del Cauca. Moreno, known as Doña Tuta, was a land rights defender in San Juan, south of Chocó. She had also been working to promote peace and address displacement driven by the armed conflict in the region.

On 8th June 2022, LGBTQIA+ rights defender Óscar Parada Torres was killed in Engativá, a district of Bogotá. According to civil society group Indepaz, armed groups operate in the area and the residents face threats, homicides, extorsion, restrictions on movement, among other types of violence.

On 10th June 2022, there were three separate reports of human rights defenders and social leaders being murdered. They were identified as Clara Isabel Samudio Perafán, who supported campesinos in San Joaquín in Mercaderes, in Cauca; Indigenous leader José Ernesto Cuetia Yajue, who was a traditional medic and representative of health charity Fundación Sonrisas Vidas Sin Fronteras in Valle del Cauca; and teacher Julio Cesar Ojeda Jara, who was also a union leader and the human rights secretary of the sub-directorate of Sindicato Único de Trabajadores Educadores del Valle (Sutev) in Valle del Cauca.

Indigenous leader Jesús Antonio Montano Tumiña of the Misak community in Cauca was found dead on 13th June, several days after disappearing on 5th June 2022. He had recently denounced threats from armed groups against the population of Popayán. Separately, young environmental defender Julián David Ochoa was killed in an armed attack on 27th June in Antioquia. Ochoa’s father and his partner were reportedly also injured in the attack. The activist had also campaigned for Pacto Histórico during the presidential electoral campaign. In another case on 27th June, trade unionist Leonardo Mora Calderón, vice-president of the Arauca Welders’ Association, was killed in Saravena, Arauca.

On 3rd May 2022, civil society coalition Espacio de Cooperación para la Paz (Space for Peace Cooperation - ECP) issued a statement on the deepening humanitarian crisis in the department of Chocó. They said that the reshaping of the armed conflict in the region, government neglect, and the slow implementation of the 2016 Peace Agreement have generated a complex humanitarian and human rights crisis. ECP stated that the armed conflict is placing campesino, Black, and Indigenous communities at risk in Chocó. The coalition urged the state to implement effective measures to protect the lives of human rights defenders, social leaders, and their communities and organisations, as well as Peace Agreement signatories.

Demonstrations on anniversary of 2021 National Strike

On 28th April 2022, on the first anniversary of the 2021 National Strike, various demonstrations were held across Colombia. Activities to commemorate the date were organised and took place mostly peacefully. In Cali, people marched and held a vigil for people killed during the 2021 protests. Minor clashes were reported in cities such as Bogotá, Medellín, and Popayán; 40 protesters were detained.

A year before, thousands took to the streets in protest against tax reform. The strike, which continued for about three months, grew to encompass multiple grievances related to the Iván Duque government’s economic and social policies. According to monitoring by human rights organisations, during the first two months of demonstrations, 75 people were killed and over 1,800 people were arbitrarily detained.

On 14th May 2022, Luis Ángel, a correspondent for Brazilian newspaper O Globo, was detained in Barú, Cartagena, while reporting on the assassination of Marcelo Pecci, a Paraguayan prosecutor who was killed in Barúon 10th May 2022. Fundación para la Libertad de Prensa (Foundation for Press Freedom - FLIP) published a video of the detention in which Ángel and journalist María Luna Mendoza told the police officers that they were working on a report. FLIP said that the procedure against the journalists was irregular and should be investigated. The police claimed that the journalists had refused to provide identity documents as requested by the officers. Ángel disputed this version, saying that he had handed over his ID and press credentials. The journalist also said the officers threatened him and Mendoza with police summons and an investigation.

In May 2022, FLIP expressed concern about recurrent limitations imposed by judges and authorities on press access to judicial hearings. In one example on 16th May 2022, media outlets were not allowed access to the indictment hearing against a man accused of shooting at protesters in Cali during the National Strike in 2021. The judge said the restriction was imposed to ensure the safety of the defendant. FLIP argued that limiting coverage may amount to prior censorship, and that restrictions on press access to judicial or official proceedings must be justified and proportionate.

In a similar incident on 6th June 2022, a judge denied the press access to a virtual hearing on the case of three police officers accused of using excessive force against National Strike demonstrators in Siloé, Cali in May 2021. According to FLIP, the judge alleged that there were technical issues and did not allow any spectators in the hearing.

FLIP also reported in June 2022 that eight journalists had complained of recurrent difficulties accessing information from the Public Prosecutor’s Office. The Office has allegedly denied access to information requests related to sensitive topics, such as investigations into enforced disappearances during the 2021 National Strike. The communications director for thePublic Prosecutor’s Office also reportedly blocked some journalists on the messaging platform WhatsApp and refused to work with a particular journalist.

On 23rd May, two journalists were attacked while covering the closure of Federico Gutiérrez’s presidential campaign in Medellín. News website La Silla Vacía reported that their correspondent Brayan Agudelo was forced to leave the campaign rally after a group of Gutiérrez’s supporters began yelling at him. According to the news outlet, the incident took place after a supporter asked Agudelo if he was being paid to take photographs, and the reporter identified himself as a member of the press. Another journalist was surrounded by supporters who shouted abusive language at her. One person in the crowd reportedly attempted to physically remove her from the rally.

In early June 2022, two journalists in Cartagena reported receiving anonymous threats. Germán Teherán, host of radio programme La Verdad, received a threatening phone call while on air. The caller claimed to be speaking on behalf of the drug cartel Clan del Golfo and insisted that he needed to speak to Teherán privately to convey an urgent message. Separately, journalist Carlos Figueroa, director of the news portal Ideas Políticas, received a death threat in a phone call. The caller in this case referred to reports made by Figueroa regarding the local Trade Council, saying that he should stop reporting or “he would not make it past the month”.

On 22nd May 2022, broadcaster Caracol Televisión issued a statement saying that their computer system had been attacked. According to the news media, the attack affected a number of design and graphic programmes and computer applications but did not reach the outlet’s informative content. The hackers reportedly used a type of ransomware which aims to hijack access to systems or devices to demand payment from their owners. Colombia’s Public Prosecutor’s Office said that it would investigate the cyberattack.