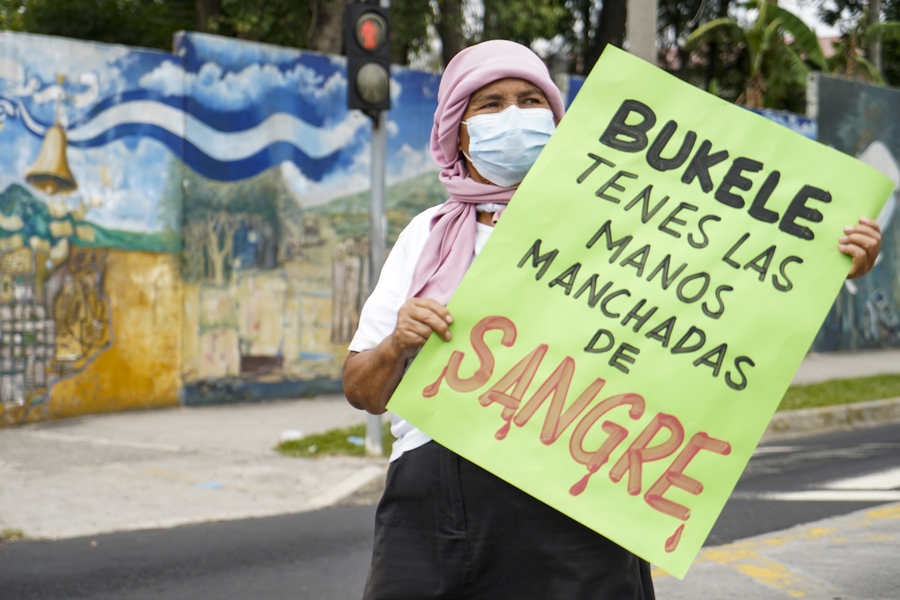 A protester holds up sign: "Bukele your hands are stained with blood." 1 May 2022, Camilo Freedman/APHOTOGRAFIA/Getty Images

Since a state of emergency was established to address gang-related violence, about 16,000 people were detained for alleged connections with criminal groups. Amid the crackdown, there have been reports of arbitrary detentions and police officers being made to fulfil arrest quotas, encouraging further due process violations. Human rights groups and journalists speaking out about abuses have faced stigmatisation and public vilification.

“Over the last 30 days, President Bukele’s government has trampled all over the rights of the Salvadoran people. From legal reforms that flout international standards, to mass arbitrary arrests and the ill treatment of detainees, Salvadoran authorities have created a perfect storm of human rights violations, which is now expected to continue with the extension of the emergency decree.”

On 10th April 2022, community leader Alicia Yamileth Pineda Chicas was detained at work in the San Hilario colony, Jiquilisco municipality, Usultán. Four days later, a neighbour of Pineda reported to Radio YSUCA that her whereabouts and the charges against her were unknown. It was later reported that she had been detained for alleged “illegal association,” an accusation that family and neighbours say is unfounded.

In a separate but similar case, Fundación Hermano Mercedes Ruiz (Fundahmer) reported that on 19th April 2022 authorities arbitrarily detained human rights defender Esmeralda Beatriz Domínguez de Peña in Bajo Lempa. She is a community leader who works with Fundahmer as an educator, and who also supports the local chapter of community development group ADESCO. Police reportedly refused to reveal the charges against her.

On 21st April 2022, a transexual human rights activist was detained by El Salvador’s police on his way to a meeting with Amnesty International. The activist was forced off a bus for a police check under the state of emergency. He later told Agencia Presentes that police officers ordered several people off the bus but focused their attention specifically on him because of the tattoos he has on his body. They also questioned why his name was different from his personal identity card.

A member of Cultura Trans, he was on his way to meet a colleague so that they could go together to the meeting with the international organisation. He called his colleague to let them know he’d been detained. Liam Fernando Linares, coordinator of Cultura Trans, said the activist was humiliated and beaten in police custody and then held with women in the provisional detention centre despite his gender identity. After the activist’s detention became public, authorities released him. He decided to report his experience anonymously for fear of retaliation.

States of exception serve the primary purpose of, in emergency situations, preserving the constitutional order. They should not, instead, undermine it or permit State agents and officials to act arbitrarily and at their discretion, like in #ElSalvador 🇸🇻https://t.co/bPIMW3du29

On 19th April 2022, Legislative Assembly president Ernesto Castro publicly vilified journalists who have denounced harassment over their criticism of government, mocking them and saying they should leave the country. Castro also claimed that it is the government that is under attack by the opposition and the media.

On 23rd April 2022, the Asociación de Periodistas de El Salvador (Salvadoran Press Association – APES) warned that tech company Apple had warned about new attacks on mobile devices in El Salvador. Similar warnings were sent to several journalists in November 2021, a few months before a civil society investigation confirmed that spyware had been used to infect the mobile phones of dozens of reporters and human rights defenders.

On 25th April 2022, hackers accessed Mónica Rodríguez’s WhatsApp and Facebook accounts and used them to publish sexual content. Rodríguez is a director of APES, and the organisation called on authorities to investigate the hacking. She has also received smear messages on social media after taking part in a journalism conference.

#ElSalvador🇸🇻 The Special Rapporteurship warns about risks of criminalization to legitimate exercises of #FreedomOfExpression following legal reforms and calls on the State to bring such legislation into line with Inter-American #HumanRights standards👉🏽 https://t.co/1PJ6ik65lG pic.twitter.com/mxzZbBsbqk

On 13th April 2022, the Office of the Special Rapporteur for Freedom of Expression of the Inter-American Commission on Human Rights (IACHR) issued a statement warning of the risk of severe criminalisation of legitimate exercises of freedom of expression in El Salvador. The warning followed the approval of reforms to the Penal Code and the prohibitions specifically aimed at the media in the Gang Prohibition Law, as previously reported on the CIVICUS Monitor.

On 22nd April 2022, Earth Day, environmental organisations from Guatemala and El Salvador held a protest to denounce the pollution caused by the Cerro Blanco mine in the department of Jutiapa, Guatemala. Environmentalists on a boat travelled down Lake Güija, on the border between the two countries, to warn against contamination with heavy metals from extractive industries. They said the Cerro Blanco mine affects El Salvador's water sources, including the Lempa river which provides fresh water to San Salvador.