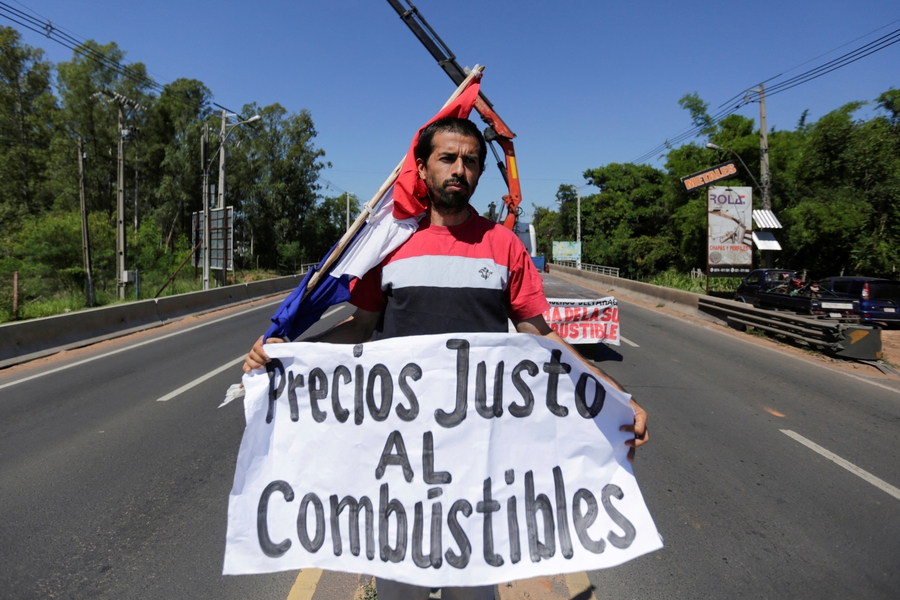 Over several days in March 2022, truck drivers in Paraguay protested and blocked roads to demand a reduction in fuel prices. On 17th March 2022, the fourth day of protests, police authorities threatened to intervene to clear road blockades. A representative of Paraguay’s International Transport Chamber estimated that around 1,000 trucks had paralysed their activities, with blockades affecting transit on about 30 routes. As reported by CNN, clashes took place between protesters and moto-taxis in Ciudad del Este amid the demonstration, while tensions rose as police attempted to disperse protesters in the San Pedro department. Despite the police intervention, the protest continued. In response to the demonstrations, lawmakers in Paraguay approved on 24th March 2022 a law subsidising fuel sold by state-owned Petropar and union leaders agreed to suspend the strike.

A few weeks later, in April 2022, a group of senators proposed modifying the Criminal Code to criminalise the blocking of roads, a measure that they said would “dissuade” protesters from blocking roads and encourage them to engage in dialogue with the government. The Coordinadora de Derechos Humanos del Paraguay (Human Rights Coordination of Paraguay - Codehupy) criticised this proposal, saying that such legislation would restrict freedom of expression and associated rights in Paraguay.

Campesino and Indigenous demonstration in Asunción

They also called on authorities to repeal Law 6.830/2021 (Riera-Zavala Law) that increased penalties for land rights defenders occupying private and public property. Women's group Conamuri issued a statement on increasing violence related to land conflict, pointing out that in 2021 there were 13 cases of evictions in campesino communities, affecting over 5,000 people. These are often accompanied by physical violence, raids, detentions and loss of belongings for campesinos. Evictions and violence also took place in Indigenous communities, with over 3,400 people impacted.

On 1st April 2022, six Indigenous defenders from the Hugua Po'iand Loma Piroy communities in the Caaguazú department were granted ‘alternative measures’ in the context of an ongoing criminal case against them. The Mbya Guaraní defenders have faced evictions and criminalisation as a result of their struggle to recover ancestral lands, and have been assisted by Codehupy in these legal proceedings. The Public Prosecutor’s Office requested their pre-trial detention, but a judge ruled that they should be placed under house arrest.

In December 2022, the photographers’ collective El Ojo Salvaje issued a statement saying the Municipality of Asunción had removed a street exhibit of protest photographs after the organisation refused to comply with a request to remove one of the images from the show.

The exhibition’s inauguration in the Fulgencia Almirón Photo Gallery, an open-air gallery in a public space, was scheduled for 10th December 2022, which marks International Human Rights Day. The photographs on display were selected in the contest “The right to social protest,” promoted together with Codehupy and with the support of the municipality. However, according to El Ojo Salvaje, before the show’s inauguration a municipal department requested the removal of one of the photographs in order for the exhibition to proceed. According to news reports, the photograph depicted a demonstrator protesting against the mayor’s political party. The group said they refused to remove the image, arguing that this would amount to censorship.

The panels containing the photographs were then removed, allegedly for maintenance, and had not been returned to the gallery by 9th December 2021. The municipality responded with their own statement saying the panels had been removed because they were in bad condition and that they presented a risk for pedestrians. They rejected the accusation of censorship and claimed they had always supported the activities of the association. Several local and international groups of press and cultural organisations expressed their support for Ojo Salvaje and condemned the situation, which they also highlighted as censorship.