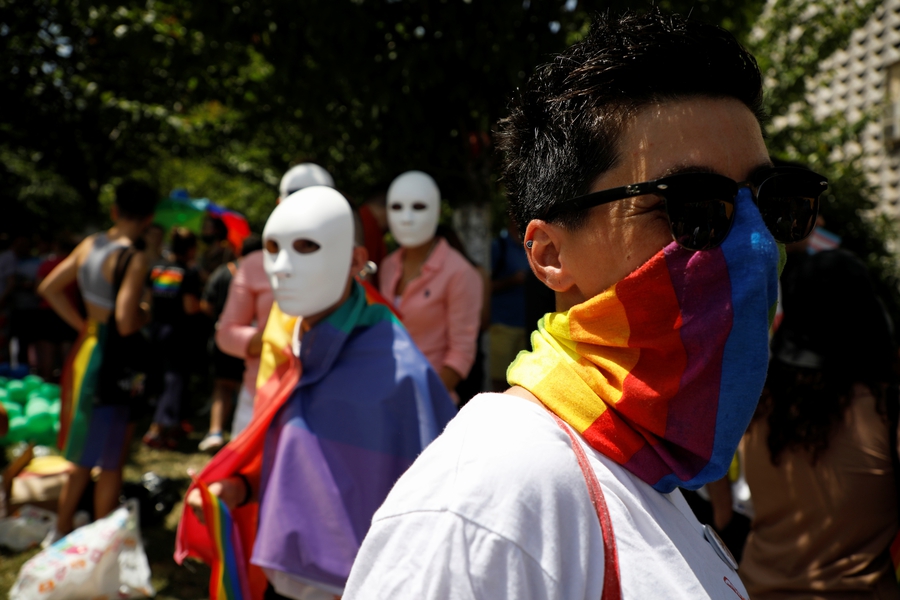 Kosovar Civil Society Foundation surveyed 18 new CSOs registered in the period between 11th February 2022 and 6th April 2022, with the aim of understanding if they faced any obstacles, delays or problems during the registration process and opening of bank accounts.

The majority of surveyed CSOs stated that they have not faced any obstacles, delays or problems during their registration. Any requests for additional documents from the Department for NGOs or any recommended changes in the objectives, scope or statute of CSOs have been reasonable and submitted in writing in accordance with deadlines provided by law and administrative instruction.

More than half of the surveyed CSOs have not yet opened bank accounts. However, CSOs that have done so reported complicated and lengthy bureaucratic procedures, and also complained about high fees for maintaining CSOs’ bank accounts.

Protests related to the Russian invasion of Ukraine

Youth Initiative for Human Rights Kosova, joined by a group of citizens, protested in front of the Russian Liaison Office in Pristina calling for an immediate ceasefire and an end to the Russian invasion of Ukraine. Under the slogans “Stop the war, save Ukraine”, “The world has seen enough wars”, “Protect human rights” and “Peace is cheaper”, they drew parallels between the sufferings of the Ukrainian people and the sufferings of Kosovar people during the last war in 1999.

In a separate rally, the Forum for Civic Initiatives, joined by citizens, NGOs, representatives of foreign embassies in Kosovo, the President of Kosovo and other representatives of public institutions, gathered in solidarity with the Ukrainian people under the slogans “Stay strong Ukraine” and “Peace for Ukraine”. The Republic of Kosovo has joined Western democracies in imposing sanctions on Russia, while the government has announced its readiness to receive Ukrainian refugees.

A pro-Russia gathering was also marked during the reporting period with dozens of Kosovo Serbs in North Mitrovica calling upon the “Ukrainian brothers” to join “Russian brothers” and get rid of the “Ukrainian Nazis”. They called for a unification of the Ukrainian and Russian peoples “against the West”.

On International Women’s Day, the collective “We march, we do not celebrate”, joined by hundreds of citizens and activists, marched to strengthen gender equality. The march commenced from the Palace of Justice and continued along the squares of the capital Pristina, towards the security and justice institutions including the Kosovo Police, Judicial Council and Prosecution Office, and ended in front of the government building. The protesters held the law enforcement institutions responsible for failing to prevent the killings of 48 women murdered by men since 2010. They threw red paint on the buildings and wrote the slogan “How many more killed women?”. In memory of them, the protesters placed 48 red shoes in front of the government building, while a red carpet was released from the Ombudsperson building. Under the slogans “Murder of women is a national urgency”, “How many more missed calls?”, “Feminism will liberate us”, “The court has blood on its hands”, “All killers are recidivists”, and “Justice for the killed women”, the protesters marched demanding justice for sexually harassed, raped and beaten girls, as well as women who have been denied their property rights. Similar marches were also held in other towns of Kosovo, with citizens and activists demanding justice and equality for women. The organisers of the march claimed that the high number of participants demonstrates a positive change in society and proves that 8th March is no longer considered simply “Mother’s Day”, but a day when women, in general, oppose inequality.

However, after the march, the collective “We march, we do not celebrate” was fined by the Kosovo Police for “disturbing public order and damaging public property”. The collective has stated that this represents an act of revenge by the police against the activists for their criticism of the law enforcement institutions for their inadequate handling of cases of violence against women and they considered the fine unfair since the march was pre-announced. Further, the collective has stated that this marks an attempt to intimidate and weaken feminist organisations in Kosovo.

During March 2022, amid strong debates, the Assembly of Kosovo failed to approve the new draft Civil Code in the first reading. However, the language used by some MPs in the Assembly was followed by actions and protests from civil society organisations promoting LGBTQI+ rights. In one action, NGO “Dylberizm” covered the walls of public spaces with graffiti messages such as “MPs pledge in the Constitution, not in the Qur'an”, “Secularism = Separation of the state from religion”, and “Corruption is a crime, not love”. Under the motto "Homophobes, you have no place in the Assembly", the Organisation for Equality and Freedom, “CEL Kosova”, protested in front of the Assembly of Kosovo against the homophobic language used by certain MPs. "There is no state with homophobes" and "Love is not a disease", were some of the protest slogans. Council for the Defense of Human Rights and Freedoms called the language used by some MPs insulting, discriminatory and denigrating toward the LGBTQI+ community.

Human Rights Watch sent a letter to the President of Kosovo, the Prime Minister and the Minister of Justice urging MPs to include same-sex marriages in the draft Civil Code. Prior to the voting in the Assembly, religious communities signed a joint statement opposing the article of the draft Civil Code that allows the registration of same-sex unions. Moreover, political parties, namely AAK and other parties from non-majority communities (Bosniak, Turkish, and RAE communities), have also come out against this article, mainly citing electorate demands and religious and family values. The new draft Civil Code allows the registration of civil unions between persons of the same sex, but it foresees the regulation of same-sex marriages by a separate special law. On the other hand, civil society organisations promoting LGBTQI+ rights have continuously advocated for the inclusion of same-sex marriages in the new draft Civil Code and therefore have not supported the draft in its present condition.

Activists of the Social Democratic Party held an action in front of the government building calling upon the executive to intervene urgently in mitigating the impact of increased prices of essential goods. This comes after citizens flocked to supermarkets to panic buy oil after prices doubled in a day and rumours circulated that there would be limited stock. The Market Inspectorate and other relevant institutions fined several supermarkets and closed several warehouses on allegations of generating artificial hikes in the prices of basic goods. Nevertheless, Kosovo has been hit by the global wave of inflation mainly affecting fuel and essential goods prices caused largely by Russia’s invasion of Ukraine.

SDP members gathered inside the building of the Energy Regulatory Office (ERO) asking its board to make public the decision to increase electricity prices. Specifically, those who purchase electricity of 800 kWH and more will not be subject to an increase.13 activists were arrested and have been prosecuted, while four police officers were injured. According to the Kosovo Police, the intervention came after the SDP activists disregarded requests to vacate the offices, and persistently stayed inside for more than four hours, preventing officials from performing their duties.

On the first anniversary of the Kurti Government, activists of the Social Democratic Party held an action in front of the government building claiming that the executive is disregarding citizens’ everyday problems.

On another occasion, activists of the SDP held an action in front of the Ministry of Agriculture calling upon the Government to intervene with emergency subsidies for farmers amid the increased cost of land cultivation. In a symbolic act, they brought an agriculture plug, claiming that the agricultural machinery and tools will remain useless if the Government does not support the farmers.

In a separate action in front of the government building, activists of the SDP placed a placard describing the Prime Minister, Albin Kurti, a fake war veteran. According to the SDP’s Chairman, Dardan Molliqaj, Kurti was not engaged in the Kosovo Liberation Army until the end of the war, which is a precondition to receiving the status of a war veteran. In this regard, they filed criminal charges against the Prime Minister. The Social Democratic Party is a non-parliamentary political party which consists of a group of former members of the Self-Determination Movement (the party in power and led by the Prime Minister, Albin Kurti). After the breakaway from the Self-Determination Movement and a failure to win any seats in the national elections of 2019, the SDP has entirely focused its actions on continuous opposition solely towards the Self-Determination Movement, and in particular its leader, Albin Kurti.

Other protests in the reporting period

Journalists, photojournalists, cameramen and editors of the media outlets licensed by the Independent Media Commission, as well as online media workers registered in Kosovo’s Written Media Council, have been included as a beneficiary category in the Law on Free Legal Aid, adopted by the Assembly of Kosovo on 25th February 2022. This legal change means that if journalists are fired, prosecuted, sued for defamation or face lawsuits, they will receive free legal services and representation in court by the Free Legal Aid Agency. This legal change marks a positive development that further enables the exercise of the freedom of expression and improves the environment for journalists.

Kallxo.com, a member of the International Fact-Checking Network that monitors media outlets publishing in the Albanian language, has detected that many media outlets in Kosovo have fallen prey to fake news, manipulated photos and propaganda videos related to the Russian invasion of Ukraine and have published these without first identifying their origin. Fake news related to the conflict in Ukraine has become global, with sequences from various movies presented as events from the war in Ukraine, and “deep fake” videos, where the President of Ukraine, Volodymyr Zelenskyy, appears to announce a national surrender. Furthermore, with the aim of protecting the public from fake news and propaganda over the conflict, the Kosovo Independent Media Commission has decided to temporarily ban all broadcasting distribution operators originating from the Russian Federation.

Kosovo’s Independent Media Commission (IMC) has not yet fully recovered its internal system which was subject to cyber-attacks weeks ago, resulting in the loss of data, access to official email addresses, and disabled electronic services. The perpetrators of cyber-attacks are still unknown, while the police have ruled out chances of a Russian cyber-attack. IMC serves as the media regulatory body and is responsible for the management and oversight of the broadcasting frequency spectrum in Kosovo.The Association of Journalists of Kosovo (AJK) condemned the cyber-attack on the Buletini Ekonomik online portal’s Facebook pages. AJK has called upon competent authorities to prioritise the case and bring the perpetrators to justice.

Democracy for Development (D4D) published the report “Monitoring of the Declaration of Conduct on social media during local elections 2021”, whose findings show that the public discourse during the local election process was dominated by hate speech. D4D monitored articles posted on social networks by political parties, candidates and the media. Articles containing insults, harsh and sexist language, hate speech and false, manipulated, fabricated and exaggerated information were detected during the monitoring of both rounds of the 2021 local elections. Meanwhile, defamatory and humiliating speech was detected, in particular against women candidates. Representatives of political parties, non-governmental organisations and media outlets in Kosovo signed the Declaration of Conduct before the commencement of the election process, pledging to refrain from posting inaccurate, negative, and discriminatory content on social media networks.