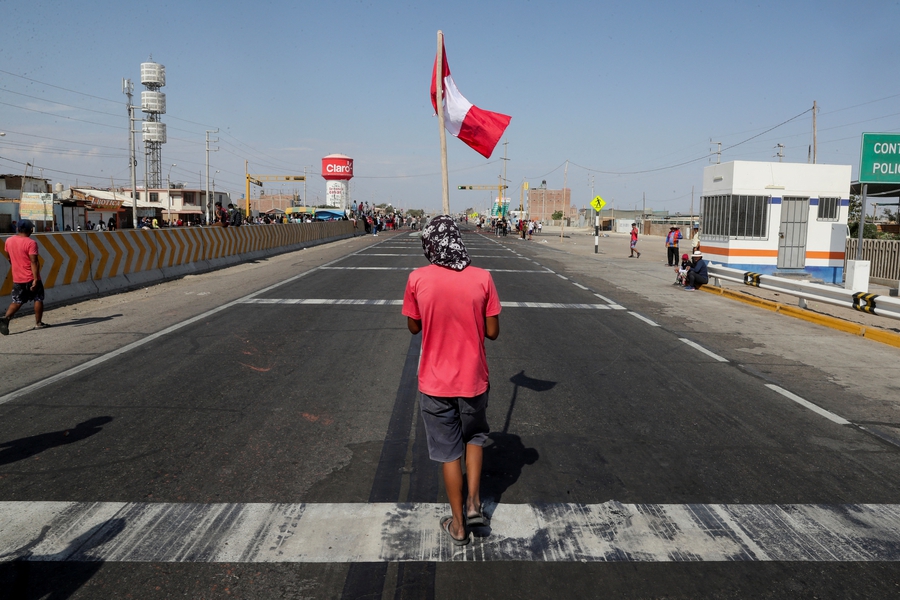 On 3rd December 2021, Indigenous Asháninka leader Lucio Pascual Yumanga was found dead with gunshot wounds in the Puerto Bermúdez district, Pasco department. He had left his community, La Paz de Pucharini, on 26th November 2021 to hunt and remained missing for several days. His body was found by members of the Asháninka community. According to human rights groups, the illegal extractive activities and narcotrafficking groups operating in the El Sira reserve, where the La Paz de Pucharini community is located, have put Indigenous peoples at risk.

A separate case took place just two weeks later, on 17th December 2021. Awajún leader Antonio Yagkuag Baais was shot and killed in the town of Santa María de Nieva, Condorcanqui, Amazonas. He was a provincial president of the Confederación Nacional de Rondas Campesinas, Urbanas y Nativas del Perú (CONARC), through which he developed actions to combat human trafficking. Local groups reported their suspicion that Baais was killed for his work patrolling the community.

On 7th March 2022, social leader and former Espinar mayor Oscar Mollohuanca was found dead about 300 metres from his home in the Cusco region. Mollohuanca was known for supporting protests in 2012 against the Xstrata Tintaya mining company, accused of polluting Espinar’s rivers. He had been criminalised for supporting the population’s demands for more environmental protections, and faced accusations of instigating the protests and financing them with public funds.

“All these deaths - which have in common the advance of mafias linked to illegal mining and drug trafficking, and corruption - reveal the State’s inability to respond effectively to the growing threats in the different territories, a fact that continues to claim lives with impunity.”

They called for the strengthening of protection mechanisms and policies, as well as a prompt investigation into the killings of human rights defenders.

In December 2021, human rights groups issued an urgent appeal, expressing concern for the criminalisation and hostility against the Indigenous organisation Federación Nativa del Río Madre de Dios y Afluentes (FENAMAD) and their president, Julio Ricardo Cusurichi. On 29th November 2021, a court ruled against the organisation and Cusurichi in a criminal defamation suit. According to the Observatory for the Protection of Human Rights Defenders, the defamation complaint was filed by timber company Canales Tahuamanu after FENAMAD denounced that they had been conducting extractive activities in Indigenous Mashco Piro territory. The Mashco Piro are an isolated Indigenous peoples and FENAMAD had urged authorities to act in their protection, saying that their culture and safety was put at risk by the logging activity.

In a separate case, intercultural communication group Servindi warned about an ongoing smear campaign against human rights defender Raida Cóndor, mother of Armando Amaro Cóndor, one of the students disappeared by security agents under former president Alberto Fujimori in 1992. The case, known as the La Cantuta massacre, was among those leading to the former president’s conviction for crimes against humanity. Servindi said false information about the case and about Raida was widely shared on social media, generating stigmatisation and revictimisation. The group said these smear campaigns are becoming a common practice, putting rights defenders at risk.

On 26th January 2022, a protest against land trafficking in Pucallpa, Ucayali, was repressed by police. The demonstration was organised by the campesino organisation Central Unica Regional de Rondas Campesinas Urbanas y Nativas de Ucayali (CUNARC), whose members had been blocking a section of a local road for two days. As reported by Wayka, police units repressed the protest using firearms and teargas. At least 22 people were injured, including a CUNARC leader. Two people were wounded with firearms and were hospitalised in critical condition. According to Servindi, the two wounded protesters were also harassed by police in the medical centre and other protesters were detained after seeking medical attention for their injuries.

On 3rd April 2022, the government confirmed that at least three people had died and 22 were detained amid protests in Huancayo. Two of the deaths took place in road accidents, and a teenager drowned after falling into a river – reportedly while trying to escape police repression. It was unclear whether the boy had been participating in the protests. On 4th April 2022, protesters burned toll booths and clashed with police near the southern city of Ica. Journalists and news crews covering the demonstrations in Ica faced attacks and threats. Pilar Zárate and Giomar Magallanes with TV Perú were surrounded by people who stopped them from filming, threw bottles and stones at them and stole their equipment.

While the government attempted to respond with a proposal to forego most taxes on fuel while also raising the minimum wage, protests continued. President Pedro Castillo imposed a curfew in Lima and Callao on 5th April 2022, banning people from leaving their homes for the day in an attempt to curb protests. The measure was announced just a few hours before the curfew was to begin. To justify the measure, authorities said the protesters had erected roadblocks and carried out “acts of violence,” as toll booths were burned, shops were looted and some demonstrators clashed with the police. In a statement, the Ombudsperson’s Office said the measure was disproportionate and unconstitutional.

Despite the curfew, hundreds of people joined anti-government protests in Lima. Police used tear gas to disperse protesters near the Peruvian Congress, and news outlets reported several incidents of vandalism and looting in the country’s capital. The government suspended the widely-criticised curfew after a few hours, as protests intensified. Civil society group IPYS reported that three journalists were attacked amid the demonstrations, with at least one reporter having to seek medical attention after being injured by protesters throwing rocks.

On 5th April 2022, a 19-year-old protester was killed in Huánuco, Ambo province, allegedly amid clashes between protesters and police. A demonstrator was killed with a shot to the chest in Ica on 6th April 2022. A spokesperson for the Ombudsperson’s Office called for an investigation into the killing to determine whether law enforcement had used lethal weapons against protesters.

On 7th April 2022, the Inter-American Commission on Human Rights (IACHR) condemned the restrictions on fundamental rights during protests in Peru, as well as the acts of violence registered during them. The IACHR urged Peru to respect and guarantee the human rights of demonstrators and people in general.

In a positive development, a criminal case against anti-mining protesters was archived. The complaint, known as “Ccapacmarca 2020,” had been filed in January 2020 by mining company Las Bambas in the Chumbivilcas province. Nine environmental defenders and Indigenous leaders faced accusations such as ‘rioting’, ‘aggravated damages’ and ‘coercion’, referring to alleged actions during a strike against the mine. Civil society group Derechos Humanos Sin Fronteras (Human Rights Without Borders) was responsible for the group’s legal defence.

On 26th November 2021, journalist Liubomir Fernández, who is a correspondent for newspaper La República in the Puno region, was beaten and detained when covering a violent clash in a local school sports field. According to press freedom group IPYS, Fernández said that when he warned the police nearby that the clash was becoming dangerous, a police officer became annoyed and threw him to the ground, handcuffed and arrested him. Among other insults, the police officer allegedly said “you are not the only journalist I put in jail.” He was released some hours later.

On 11th January 2022, a group of about 30 members of far-right groups protested in front of the offices of investigative journalism group IDL Reporteros (IDL-R). During the demonstration, the participants shouted threats and insults against the media and, specifically, against IDL-R director Gustavo Gorriti. The media outlet identified the demonstrators as members of ‘La Resistencia’, ‘La Insurgencia’ and ‘Los Combatientes,’ all right-wing groups that have engaged in political violence and attacks against the press. Municipal police were deployed to protect the outlet’s offices. The group was dispersed after about two hours when another police contingent arrived.

On 2nd March 2022, journalist Maricarmen García with media Willax was assaulted while covering protests in front of the Ministry of Health in Lima. The incident took place as the journalist interviewed a spokesperson for a physicians’ union. A group of anti-vaccine protesters interrupted the live filming, tried to cover the cameras and attacked the journalist, pulling at her mask and hair. They also insulted the health workers and media present.

On 8th March 2022, at least five journalists from different media outlets were assaulted while covering pro-government demonstrations outside the Congress building in Lima. According to the Consejo de la Prensa Peruana (Peruvian Press Council - CPP), reporters from several different outlets, including La República, Caretas, Diario Uno and Latina, faced attacks from government supporters. The press group said these attacks have become recurrent under the Pedro Castillo government. The CPP said:

“The government’s attitude against journalists and the media creates a generalised hostile ecosystem, which has also been joined by other institutions in the country and radicalised sectors of society, both on the left and on the right.”

On 24th February 2022, a congressional commission approved a bill reforming the rules of plea bargains involving turning state’s evidence, known as ‘effective collaboration’ (‘colaboración eficaz’) in Peru. Plea bargains, in which a person agrees to provide information to authorities, have been among the most used mechanisms in anti-corruption investigations in Peru and across Latin America. Among other things, the bill would restrict whistleblowing and the press’ ability to report on such agreements.

Article 2 of the bill, on the disclosure of confidential information, would establish prison terms for public officials who leak information on the identity of a collaborator or the content of these plea bargains. The bill would also create penalties for publishing information on them, which could impact media outlets and journalists. Civil society group Instituto de Defensa Legal (Legal Defence Institute - IDL) said this reform would seriously affect freedom of information and expression, threatening the confidentiality of journalistic sources, imposing censorship and criminalising journalists who expose corruption.

IPYS also published a statement condemning the bill, saying that most often the content of these agreements refers to public interest information and is therefore protected by the right to freedom of information. The organisation said journalists should not be criminalised for informing on them.

In December 2021, the Ombudsperson’s Office presented a report evaluating the state of press freedom in Peru after 120 days under the Pedro Castillo administration. The report underscored that high officials in the government and the president himself have made declarations stigmatising journalists. This discourse, the Ombudperson’s report said, fosters a hostile climate against the media, in particular against those who maintain a critical editorial line. In addition, the State has failed to comply with its obligation to prevent, investigate and punish attacks on journalists.

Separately, on 11th January 2022, the National Human Rights Coordinator issued a statement alerting to threats to the right to freedom of expression in Peru. The group said that the justice system has been abused to harass journalists, in particular with complaints for ‘crimes against honour,’ such as defamation. The statement highlights a bill that would worsen this situation by increasing penalties for ‘aggravated defamation,’ which would lead to jail time. The statement said:

“In recent years, several journalists have had their journalistic work criminalised, and justice operators are not guaranteeing due process, which constitutes a serious risk for journalism and democracy.”

Human Rights Watch’s annual World Report 2022 also states that prosecution of journalists using criminal defamation laws has remained a concern in Peru. The human rights group also highlighted cases of retaliation against journalists because of their electoral coverage, as well as restrictive bills under discussion.