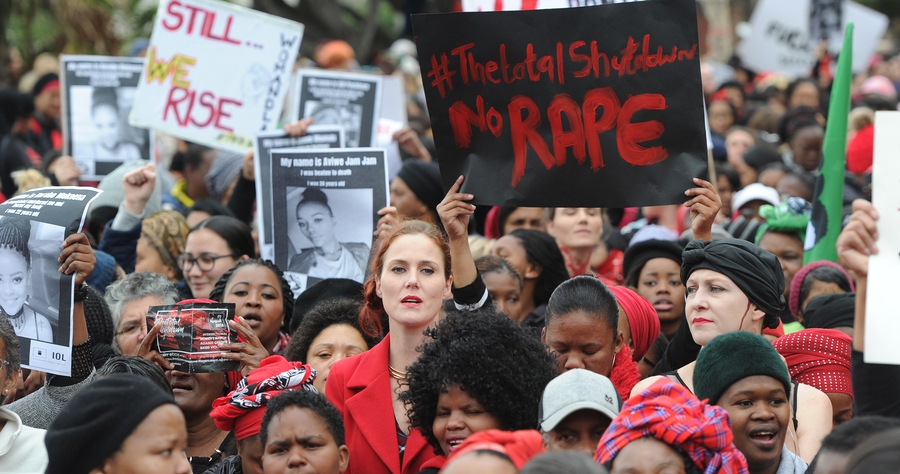 Towards the end of 2021, the Right2Protest, a coalition of civil society organisations in South Africa that aim to protect and promote the right to protest in the country, released its annual State of Protest Report for 2021.

In the report, the organisation notes that the largest number of requests for support mechanisms related to protest action came from students during the month of March 2021, as a result of their return to university and fee increments in universities.

In addition, the report sets out various case studies of violations of human rights that occurred in South Africa throughout 2021, when people exercised their constitutionally guaranteed right to protest. For example, the excessive use of force by the police during protests remains a huge issue of concern. According to the law, the police are required to ensure that during protests the “use of force must be avoided at all costs and members deployed for the operation must display the highest degree of tolerance”.

However, in South Africa that is hardly the situation. This is also demonstrated by the killing of Mthokozisi Ntumba, a pedestrian who was shot and killed at close range with rubber bullets by members of the police during a student protest. The trial against the accused police officers is still ongoing.

Although the government finally released the long-awaited Panel of Experts Report on Policing and Crowd Management, which was prepared as a result of the Marikana Massacre, recent events demonstrate the failure of the police to facilitate and protect the enjoyment of the right to peaceful assembly, as required by law. In the report, the panel emphasises that “given that [rubber bullets] are difficult to deploy safely and effectively they should only be used under strict command”. However, the National Police Commissioner recently expressed no intention to consider alternative measures, stating that it would be “impossible to stop the use of rubber bullets”.

on 29th January 2022, over 400 residents in Hammersdale, KwaZulu-Natal, took to the streets to protest against continuous power outages. The protest erupted after the area’s ward councillor, who was set to meet the residents to hear their grievances on that day, sent a representative to meet them instead. The residents threatened to burn down the power station in Hammersdale if the continuous power outages were not resolved.

According to a report by Eskom, the country’s power utility, South Africa’s deepening energy crisis is likely to get worse in the next few years. This is as a result of Eskom, as a monopoly state power utility, experiencing serious mismanagement of funds and its failure to adequately maintain plants and invest in new ones.

Separately, on 18th March 2022, it was reported that a march against xenophobia in South Africa which was slated for 21st March 2022 in Johannesburg, was banned by authorities. The march, which was organised by a coalition of civil society organisations, under the umbrella Kopanang Africa Against Xenophobia (KAAX), aimed to denounce the increasing promotion of xenophobia in the country by certain organisations and political parties. Although the organisers had notified the police about the march in advance as required by law, the law enforcement banned the march on grounds of safety.

According to the police, other major groups were highly opposed to the march, thus posing a risk of tensions and violence during the march. According to the organisers, the police had informed them that a group known as Operation Dudula had been issuing threats against KAAX, the march and “any so-called illegal immigrants who participate.”

The ban by the police was however criticised for being in contrast to the permissions frequently granted to marches by groups such as operation Dudula, even where the threat of violence and intimidation of foreigners by the group has been evident.

“This makes it crystal clear that the police simply do not want to do their job, are effectively caving in to the blackmail of Operation Dudula and are blatantly violating the rights of KAAX and all those participating in the march.”

On 10th January 2022, South Africa’s Supreme Court of Appeal (SCA) handed down a judgment that activists have applauded as being progressive in guaranteeing the exercise of the right to freedom of expression. In the matter, the SCA was called upon to deal with an issue concerning the tension between the right to privacy and the right to freedom of expression, surrounding a Facebook post that was made by a wildlife conservationist and activist on naming and shaming a farmer who killed wildlife that he viewed as vermin.

In the matter, the SCA considered whether the publication of the Facebook posts made by Mr Smuts (the wildlife conservationist and activist) were protected by the right to freedom of expression. In a unanimous judgment, the court noted that “the right to freedom of expression in the Bill of Rights protects every citizen to express himself or herself and to receive information and ideas. The same right is accorded to activists to disseminate information to the public. The Constitution recognises that individuals in our society need to be able to hear, form and express opinions freely, on a wide range of topics.”

In addition, the SCA also noted that the content that was published on Facebook by the activist “was a fair comment and the public interest is best served by publicising the truth rather than oppressing it.”

Cybercrimes Act 19 of 2020 comes into effect

On 1st December 2021, a few sections of the Cybercrimes Act 19 of 2010 came into effect. President Cyril Ramaphosa officially signed the law on 26th May 2021,

As stated in the Act, the piece of legislation intends, amongst other things, “ to create offences which have a bearing on cybercrime” and to also “criminalise the disclosure of data messages which are harmful and to provide for interim protection orders.” For example, the Act makes provision for criminalising the sharing of intimate images of a person on social media without their permission.

As it stands, the Act has partially come into effect, and those applicable sections include those setting out the types of cybercrimes and malicious communications, including the sentencing for offences, and those referring to the jurisdiction of the courts. The Act also gives extensive powers to the South African Police Service (SAPS) to investigate, search, access and seize articles (such as computers, databases, networks) used in the commission of cybercrimes, and to also co-operate with foreign states to investigate cybercrimes.

In the 2021 Reporters without Borders Index, a barometer that evaluates the state of press freedom in 180 countries, South Africa was ranked at number 32, dropping one place from the previous year.

In its analysis of the situation in South Africa, the Reporters without Borders Index reports that although press freedom is protected in the country’s Constitution, the exercise of the right remains in a fragile situation. The index further states that the investigative journalism culture in South Africa is often limited by apartheid-era legislation and terrorism laws which are still in effect and therefore “limit coverage of government institutions when “national interest” is supposedly at stake”.

For many years, journalists in South Africa have been subjected to harassment and surveillance when investigating high profile cases. More recently, journalists were negatively affected in carrying out their work since the start of the COVID-19 pandemic due to lockdown regulations and “a community newspaper editor even had to flee to Lesotho after being threatened by the police for covering a lockdown-related story”.