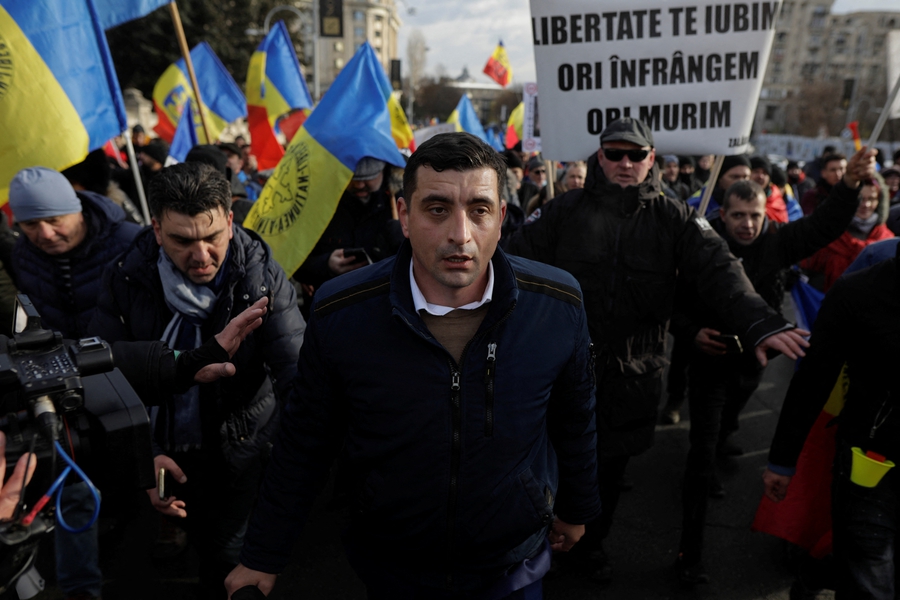 As reported earlier on the CIVICUS Monitor, in September 2021 the governing coalition of Romania collapsed after the centrist party Save Romania Union (USR) withdrew its ministers following a decision by Prime Minister Florin Citu of the centre-right National Liberal Party (PNL) to dismiss the justice minister.

After months of political crisis, the Romanian parliament has agreed to a new grand coalition. On 25th November 2021, Romanian MPs voted to approve a coalition consisting of two of the largest parties in parliament, the National Liberal Party (PNL) and the Social Democrat Party (PSD). Also included in the coalition is the ethnic Hungarian party UDMR.

On 1st February 2022, the fifth wave of COVID-19 infections in Romania peaked with more than 26,700 cases daily on a 7-day average in a country of 19 million. Romania has the second-lowest vaccination rate in the EU, with less than 40% of adults vaccinated. The country has already been hit hard by the fourth wave which peaked in November 2021. During that surge, intensive care units were operating beyond capacity and hospital morgues ran out of space.

On 6th January 2022 the state of alert was prolonged by another 30 days, and new restrictions were introduced, for example, making FFP2 or medical masks mandatory in all public places. Other measures were also considered but later dropped, for example, the so-called Green Pass - for those who have either been fully vaccinated, have tested negative for COVID-19 during the previous 48 hours, or have recently recovered from the virus - as a precondition for going to work.

On 21st December 2021, the extreme-right Alliance for the Union of Romanians (AUR) party held a protest, with the participation of hundreds of supporters, against the possible introduction of mandatory vaccination/testing/recovery certificates ("Green Pass") in the workplace. AUR co-chair George Simion asked the public "to stand with us today to block the green certificate" and called the bill "unconstitutional".

During the protests outside parliament, four cars were vandalised and protesters entered the courtyard by the main entrance. According to BIRN, Romanian police have already handed out over 117 fines amounting 198,800 lei [40,000 euros] to participants. "We are continuing investigations to identify and sanction other people who committed anti-social acts", police said in a press release.

On 13th December 2021, Italian journalist Lucia Goracci and her film crew were attacked in Romania after an interview with Senator Diana Sosoaca. The Senator is known as an anti-vaccine proponent who spreads conspiracy theories about COVID-19. The interview took place in the Senator’s law firm offices where she was asked a series of questions about the pandemic. After a few questions, the Senator became aggressive towards the film crew and allegedly locked them in her office. Following the police’s arrival, the Italian journalists were questioned and were released after eight hours, due in part to intervention from the Italian embassy. Goracci claims that the Senator’s husband, Dumitru-Silvestru Sosoaca, bit her hand. Dumitru-Silvestru Sosoaca is also accused of assaulting a police officer during the incident with the journalists and was placed under 60 days of judicial control.

Romanian Police spokesman Georgian Dragan said: "The appellant’s husband allegedly pushed and grabbed a police officer by the neck and also hit the Italian journalist. Immediately after that, after the intervention, the journalists came out on the staircase of the building, and the conflict ended."

According to Minister of Interior Lucian Bode, "I trust the institutions, in the collaboration between the institutions from Romania and from Italy, which is a high level one, and I trust that at the end of the investigation everyone will be held accountable.”

#Romania: RSF firmly condemns the assault of Senator #DianaȘoșoacă 's husband on @Raiofficialnews's Lucia Goracci & her team during an interview after the anti-vax politician accused the journalists of preparing a scandal. The present police officers failed to prevent the attack. pic.twitter.com/1eNL2uBYVB

Separately, on 13th January 2022 counter terrorism police raided the home of Alin Cristea, editor-in-chief of local online news outlet debrăila.ro and confiscated his equipment, including personal and work electronic devices, telephones and storage devices. Police also visited Cristea’s parents’ home and the media outlet’s offices. The raid was carried out under Article 374 of the criminal code as part of investigations into alleged distribution or possession of child pornography materials and is related to an article and video published by the outlet which exposed child abuse. Prior to the raid, the outlet faced pressure in relation to publishing a critical editorial related to the article which called out the police commander in Brăila for being inefficient.

The right-wing nationalist party Alliance for the Union of Romanians (AUR), which has 13 representatives in the 136-member Romanian Senate and 30 in the 330-member Chamber of Deputies, has been criticised for starting a public campaign on social media against Romanian media outlets critical of its worldview. The party posed a message on its Facebook page asking followers to draw up a list of “toxic and false media” and made a few suggestions. The post garnered over 2,000 comments which mentioned television outlets and publications such as Digi 24, Antena 3, Realitatea TV or Newsweek or journalists such as Cristian Tudor Popescu and Lucian Mîndruță.

Cristi Pantazi, the editor-in-chief of G4Media.ro, one of the outlets smeared by AUR, told Balkan Investigative Reporting Network that blacklisting media is a tradition by the far right in Romania. Pantazi added that by making public blacklists:

“AUR tries to intimidate journalists who honestly report this party’s facts, intentions and positions. AUR wants to inhibit the professional press, which presents the public as they are: as anti-Semites, Holocaust-deniers, violent, and hate-speech promoters”.

In October 2021, AUR was the only party that voted against making the history of the Jewish people and the Holocaust a mandatory subject from 2023 in all high and vocational schools in Romania. About 300,000 Jews and 11,000 Roma were killed in Romania during the Second World War under the government of Marshal Ion Antonescu.

“AUR party blatantly violates the principles of democratic life by urging citizens to help blacklist those media outlets it labels as toxic. We stand in solidarity with these media outlets, which are now the target of a dangerous populist attack, and call on other parties, organisations and citizens who still believe in freedom of conscience, freedom of expression and the right to information to firmly reject blacklists and attacks on democracy.”