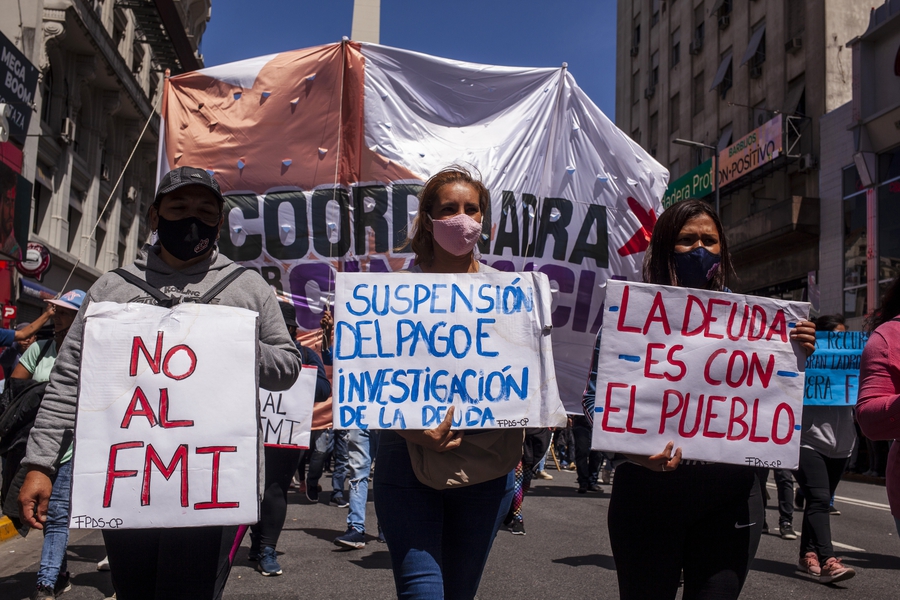 On 24th September 2021, police in Neuquén evicted a Mapuche Lof Quemquemtreu community from territory they had occupied near El Bolsón, Río Negro province. About 30 Indigenous people, who peacefully settled in the area to reclaim ancestral territory, were violently evicted by police using disproportionate force – including rubber bullets and firearms. Four people were arrested. The area occupied by the Mapuche is disputed by a landowner who runs a pine tree foresting business.

Some community members remained in the territory under police surveillance. According to organisations monitoring the situation, the police cut off access to the remaining group, denying the organisations’ attempts to support them with food and clothing. Despite the police presence, on 21st November 2021 assailants entered the territory and shot two community members, Elías Garay and Gustavo Cabrera. Garay was killed with a gunshot to the head.

Indigenous and human rights organisations called for the creation of a dialogue table with provincial and national authorities, and called on authorities to respect Indigenous people’s rights to land.

On 23rd November 2021, the president of the Coordinadora por los Derechos y la Justicia (Coordinator for Rights and Justice - CODEJU), Guillermo Galantini, and other members of the organisation were violently detained by the police near Monte Caseros, while they accompanied a court-ordered eviction. Galantini’s son, Galileo Galantini was also detained. As reported by the International Federation for Human Rights, the arrests took place amid a violent eviction of families in Paraje “Paso Vallejos.” The CODEJU activists were reportedly beaten and detained for at least 24 hours without charge.

“Galantini's arrest is an attempt to discipline those who fight against the policies of austerity, land concentration and extractivism.”

The defender was released from pre-trial detention on 13th December 2021 but still faces charges.

On 11th December 2021 thousands of people rallied in Buenos Aires to protest against negotiations between Argentina’s national government and the International Monetary Fund (IMF) to restructure the country’s debt with the fund from a record bailout. The protest was convened by social organisations, left-wing groups, labour unions and student movements under the banner “No al pago de la deuda externa” (“No to the payment of the external debt”). Protesters argued that the repayment of US$45 billion in loans to the IMF would require austerity measures. “The government has to suspend paying off the debt so that it can redirect that money to help the people who need it the most, who are the people who can't make it to the end of the month, who have to go to a community soup kitchen to be able to feed their families,” said Ana Barreto, a leader for the social organisation Libres del Sur.

Mobilisation against the repayment continued on 27th January 2022, with organisations telling the government “Primero lo primero: ni un dólar más al FMI” (“First things first: not a dollar more to the IMF”). The protesters demanded a referendum on the debt repayment, saying that people should decide on the matter. Despite the protests, on 28th January 2022 President Alberto Fernández announced that an agreement to refinance the debt had been reached with the IMF. According to the country’s Finance Ministry, no spending cuts, including energy subsidies, would be made under the terms of the deal.

Social outcry in Chubut against mining

In Chubut, a Patagonian province with almost 600,000 residents, an attempt to modify mining legislation sparked protests and led to unrest in December 2021. A law from 2003 prohibited open-pit mining and the use of cyanide in the production process but on 13th December 2021, the provincial legislation approved a new zoning law enabling the implementation of large-scale mining in two departments of the province, Gastre and Telsen. The Navidad silver and lead deposit, owned by multinational Pan American Silver, is located in the region.

As the news broke, large protests started in Rawson, the provincial capital, and Trelew. The protests were met with repression. Overnight on 15th December 2021, police used tear gas and rubber bullets against protesters, while some demonstrators threw rocks at the officers. The demonstrations spread throughout the province for six consecutive days, despite repression by the security forces.

While the protests were mostly peaceful, there were instances of violence, including the torching of at least 16 public buildings in Rawson and an arson attack on the offices of newspaper El Chubut in Trelew on 20th December 2021, as detailed in the “Expression” section of this update.

As a result of the public pressure, the province’s governor decided to ask lawmakers to repeal the mining zoning law and said the local government would organise a plebiscite on the matter. On 21st December 2021, the legislature effectively repealed the legislation. Anti-mining activist Cristina Agüero commented on the governor’s proposal of a plebiscite: “We don't understand what Arcioni wants to consult, we already posed the question for him on the streets for free and the answer was ‘no’.”

Vigil for the freedom of Milagro Sala

On 15th December 2021, activists demanding the release of Milagro Sala organised a protest camp and vigil in front of the Supreme Court. As previously reported on the Monitor, Sala is an Indigenous leader of the Tupac Amaru Movement who has been under arrest for over five years. The national coordinator of Tupac Amaru, Alejandro Garfagnini, said that the city’s police “provoked” demonstrators by deploying infantry guards, and warned about potential repression.

#ARGENTINA: Argentine authorities must thoroughly investigate the recent attack on the Clarín media group headquarters and bring all those responsible to justice. @clarincom @FOPEA @Adepargentina https://t.co/eQg6lzbkSh

On 22nd November 2021 at around 11pm, a group of assailants threw at least nine Molotov cocktails at the entrance of the Clarín media group headquarters in Buenos Aires. The building was closed at the time, and there were no victims or material damage. Surveillance footage showed about nine people involved in the attack, and the assailants fled on motorcycles after throwing the explosive devices. Founded in 1945, the Clarín is Argentina’s largest media group.

The authorities are investigating the attack as an act of “public intimidation,” as reported by Clarín. President Alberto Fernández commented on the case in a post on Twitter: “I would like to express our repudiation of the episode that took place in front of the Clarín newspaper’s headquarters. Violence always disrupts democratic coexistence. We hope that the facts are clarified, and the perpetrators are identified through the investigation that is underway.” Initially police detained one suspect, but the person was released after no evidence of his involvement was found. Three others were identified as suspects in December 2021.

In a separate incident, on 20th December 2021 a group of demonstrators threw rocks and firebombs into the headquarters of the El Chubut newspaper in the city of Trelew, Chubut province. As detailed in the ‘Peaceful Assembly’ section of this update, the attack occurred amid protests against a provincial ordinance on mining zoning which had been approved the day before. As reported by the Committee to Protect Journalists (CPJ), the attackers broke windows of the building and set several fires. They also entered the building, damaging and stealing equipment and archival materials. Journalists and staff were evacuated by police, and no one was injured. El Chubut reported that prior to the demonstration there had been calls on social media for people to gather in front of the newspaper’s offices, as protesters claimed the news outlet had promoted mining in the region.

As reported by CPJ, an Argentinian court ordered journalist Santiago O’Donnell to turn over his interview recordings of former president Macri’s brother. O’Donnell, who wrote a book based on these interviews, has faced a court order since early 2021 to surrender recordings of his interviews as part of a civil case initiated by Mariano Macri. The book contains allegations of fraud involving members of the Macri family. On 15th December 2021, O’Donnell’s appeal against the court order expired, his lawyer said. Separately, O’Donnell’s attorneys filed a special motion to the Supreme Court seeking to suspend the order. However, that motion is still pending, and there is no timeframe for the court’s decision.