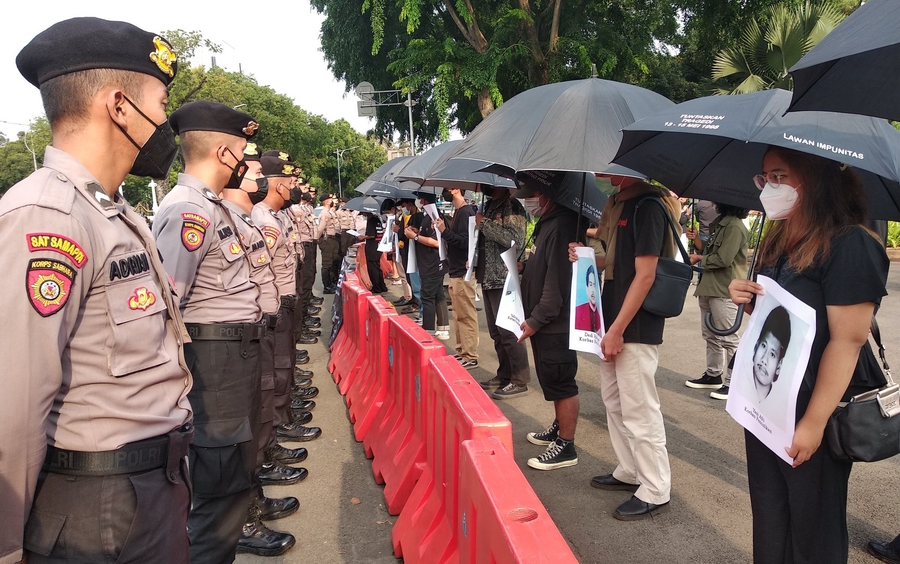 The civic space rating of Indonesia remains as ‘obstructed’ in ratings published by the CIVICUSMonitor in December 2021. In recent months, the authorities have been harassing human rights defenders Fatia Maulidiyanti and Haris Azhar, while human rights defender Veronica Koman and her family were threatened.

Papuan activists were arbitrarily arrested in early December 2021, with eight facing treason charges for raising the Morning Star flag - a banned symbol of Papuan independence - while excessive force was reported against a student in Tangerang. The authorities withdrew a complaint against two Greenpeace Indonesia activists following public criticism,  a journalist in South Sulawesi province was sentenced to three months in prison, while two police officers were convicted for assaulting a journalist in East Java.

On the morning of 18th January 2022, the police visited the homes of human rights defenders - Fatia Maulidiyanti from the Commission for the Disappeared and Victims of Violence (KontraS), and Haris Azhar, the Executive Director of Lokataru - to take them to Metro Jaya police station. This was related to the defamation allegations against them. Both refused to go with the police and stated they would come to the station on their own. When they arrived, they were questioned for nearly five hours, according to reports.

As previously documented, Haris and Fatia are facing defamation charges for comments they made during an online talk show on YouTube around links between the military and mining concessions in Papua province. In the video published in August 2021, the two human rights defenders discussed the results of research undertaken by several human rights organisations on the involvement of current and retired army personnel in a gold mining business in Papua. During the video discussion, the human rights defenders referenced one of the mining companies whose shares are owned by the Coordinating Minister for Maritime Affairs and Investment, Luhut Binsar Panjaitan.

Following the release of the video, the Coordinating Minister sent two subpoenas on 26th August and 2nd September. On 22nd September, the Coordinating Minister reported them to the police using the Electronic Information and Transactions Law (ITE Law) – a vague and overbroad law that has often been used to arrest, prosecute and punish activists, journalists and government critics. He further demanded that each pay him 100 billion rupiahs (approximately USD 7 million) as compensation.

On 21st October 2021, Haris Azhar and Fatia Maulidiyanti were summoned by Jakarta police for mediation. However, the Coordinating Minister did not turn up and the mediation was postponed indefinitely.

The United Nations says Indonesia must immediately drop charges and look into threats, intimidation and reprisals against human rights defender Veronica Koman and her family.https://t.co/y1HkubHOK7

There have been continued threats and harassment against woman human rights defender Veronica Koman and her family.

Both packages also contained threatening messages against the woman human rights defender and people aware of her whereabouts. One stated "we will scorch the earth of wherever you hide and of your protectors” while another message stated that anyone hiding her "will end up like this."

Veronica has advocated extensively for human rights in West Papua. She is a member of International Lawyers for West Papua, an international network of lawyers working to strengthen human rights of the people of West Papua. Previously, she worked as a public interest lawyer at the Jakarta Legal Aid Institute (LBH Jakarta).

Veronica is currently in a self-imposed exile in Australia since she faces considerable risks to her security in Indonesia. She faces several charges in Indonesia including alleged “incitement”, “spreading fake news”, “displaying race-based hatred” and “disseminating information aimed at inflicting ethnic hatred”, all believed to be in retaliation for her legitimate human rights work in West Papua.

UN Special Rapporteur on the situation of human rights defenders, Mary Lawlor, said: "I am extremely concerned at the use of threats, intimidation and acts of reprisal against Veronica Koman and her family, which seek to undermine the right to freedom of opinion and expression and the legitimate work of human rights lawyers."

Arrests and detention around protests in Papua

Eight students were detained by police on 1st December 2021, and have been charged with treason in Papua for raising the Morning Star flag - a banned symbol of Papuan independence - at the Cenderawasih Sports Centre in Jayapura City and marching toward the Papua Police Headquarters.

In a separate incident, at least 19 people were detained in Merauke regency, Papua on 30th November in relation to a video of spiritual and indigenous community leader “Mama” Paulina Imbumar, in which she declared her intention of raising the Morning Star flag in Merauke on 1st December. Paulina and her 16 followers were released without charge on 1st December. However, two members of video advocacy initiative Papuan Voices - Urbanus Atek Kiaf Yolmen and Selsius Kanua - who recorded and uploaded the video, were detained.

The date, 1st December, is unofficially considered West Papua Independence Day when Papuans first flew the Morning Star flag in a bid for independence from the Dutch. Police have often arrested Papuan activists for peaceful political expression on the day. According to Amnesty International, 34 people were arrested, 19 protesters were injured, and protests in two cities were forcibly dispersed on that day.

There have been ongoing calls for independence in the Papuan region due to severe restrictions and abuses by the Indonesian security forces. Despite continued promises by President Joko Widodo to address the grievances of Papuans, they continue to face discrimination and exploitation in the resource-rich region.

Excessive force against a protester in Tangerang

Human rights groups have raised concerns about the treatment of a student protester in Tangerang. The incident occurred on 13th October 2021, as Tangerang students demonstrated in front of the regent’s office, calling on the authorities to address city pollution, the unfair treatment of COVID-19 volunteers and damaged roads. In a video of the protest that circulated on social media, a police officer is seen slamming a protester on the pavement while other officers try to push demonstrators back. A loud thump is audible, and the protester appears to have a seizure.

Amnesty International Indonesia executive director Usman Hamid condemned the incident, deeming it a blatant act of brutality. “That was clearly a criminal offence as [the police] used unnecessary force and violence,” he said. He urged for the perpetrator to be taken to court to be put on trial and to ensure justice for the victim .

Husin Shahab, the Secretary of the Legal Mafia Eradication Committee, who reported activists Leonard Simanjuntak dan Kiki Taufik to the police, claimed their criticisms were untrue and violated Indonesia's controversial Electronic Information and Transactions (ITE) Law. The ITE law is vague and broad and allows the government to silence online dissent.

The controversy started on 2nd November during the UN Climate Change Conference (COP26), where 141 signatories, including Jokowi, signed a pledge to end deforestation by 2030. Within days, Indonesia's Environment and Forestry Minister Siti Nurbaya Bakar said the nation would prioritise economic development over the environment and called the pledge unfair, seemingly backtracking on Indonesia's commitment.

That same day, President Jokowi gave a speech at the conference in which he seemed to downplay Indonesia's deforestation history and environmental impact. Greenpeace Indonesia’s Instagram account released numerous reports and posts debunking Jokowi's claims and contrasting them with long-term data, noting that deforestation had more than doubled in the last two decades.

The move to file the report drew much criticism online, leading to Shahab withdrawing the police report.

According to Reporters Without Borders (RSF), Muhammad Asrul, a journalist in central Indonesia’s South Sulawesi province was sentenced to three months in prison in a defamation case which, under Indonesian law, should have been treated as a civil matter.

A reporter for the Berita News website who investigated alleged local corruption, Muhammad Asrul was convicted on 23 November 2021 by a court in the city of Palopo of criminal defamation under section 27(3) of the ITE Law. He was convicted in connection with a three-part story in May 2019 about alleged embezzlement by local officials in three building projects – repairs to a hydro-electric dam, the revitalisation of the Palopo Pancasila industrial zone and construction of a bypass west of the city.

Two Indonesian police officers were sentenced to 10 months in prison for beating a reporter in a case that sparked widespread protests from journalists and press freedom advocates. The officers, Purwanto and Muhammad Firman Subkhi, were convicted by the Surabaya District Court in East Java on 12th January 2022 for assaulting the journalist Nurhadi who is with the Tempo news portal and were also ordered to pay 13.8 million rupiah (USD 966) in compensation to the journalist.

On 29th March 2021, Nurhadi is reported to have gone to the wedding of the daughter of the former director of investigations and tax collections at Indonesia’s Finance Ministry, Angin Prayitno Aji, to collect information for his report on bribery when the two policemen, who were also working as Angin’s bodyguards, accused him of trespassing, despite him showing his press card.

Nurhadi said that the bodyguards then assaulted him. The journalist “had his hair pulled, was slapped in the face and ears, punched and trodden on” and was held captive for two hours inside a hotel room in Surabaya. During his detention, Nurhadi’s mobile phone was seized and smashed and the bodyguards reset the memory on his computer, which contained information regarding the corruption case.

According to local press freedom group, Alliance of Independent Journalists (AJI), abuses against journalists occurred throughout 2021. The group recorded 43 cases through the year including cases of terror and intimidation (9 cases), physical violence (7 cases), prohibition of reporting (7 cases). AJI also noted 5 cases of digital attacks, 5 cases of threats, and 4 cases of criminal and civil prosecution.