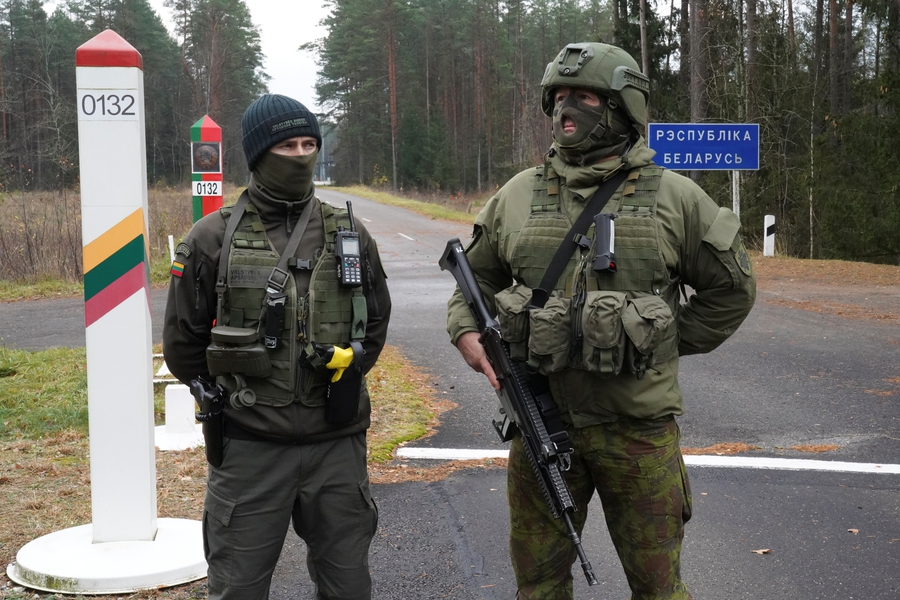 On 9th November 2021, a state of emergency was declared, concerning bordering territories, by the Lithuanian Seimas as a consequence of the emergency situation arising from the migrant crisis at the border with Belarus. The measures, imposing limits on entering the five kilometre-long zone and impacting migrants’ and asylum seekers’ rights, entered into effect on 10th November 2021. The state of emergency, which was set to be in force for one month, was further extended to 15th January 2022.

In a separate development, for the first time, on 14th October 2021, Lithuania, until now an observer country, was elected by the United Nations General Assembly as a member of the UN Human Rights Council for the 2022-2024 term. The Ministry of Foreign Affairs listed “the protection of the rights of children and people with disabilities, the safety of human rights defenders, human rights in conflict zones, and a timely response to human rights violations” as priorities for the period.

Several protests took place in Lithuanian migrant camps, although restrictions on reporters in the border section limited the collection of information.

In an unrelated protest, a small rally was organised on 10th December 2021 outside the Embassy of China in Vilnius. Leading up to the Beijing Winter Olympics that will take place in February 2022, the activists, including members of the NGO Tibet Support Group, called for increased intervention by Lithuanian athletes to raise awareness on ongoing violations of human rights in China. Lithuanian Minister of Sport Jurgita Šiugždinienė had already stated that she would not be present at the Games and 17 other members of the Lithuanian parliament encouraged a boycott of the Winter Olympics

Members of the Lithuanian Internet Media Association (IŽA), which included media outlets Delfi, 15min.lt, Lrytas.lt, Madeinvilnius.lt and ve.lt, published a press release expressing their voluntary decision to temporarily disable comments under articles related to COVID-19 vaccinations. They believe this will prevent online disinformation on the vaccination campaign and help to boost the vaccination rate in Lithuania. Delfi.lt opted to turn off anonymous commenting and to allow comments only from registered users. The CEO added: “For us it is of crucial importance that Delfi.lt would remain a forum for discussions, sharing one’s opinion, exchanging views, but all this must be done with respect for each other and taking responsibility for one’s words”.

Following the case regarding censoring incorporated into devices produced by the Chinese company Xiaomi, and as a consequence of a warning from the Lithuanian Ministry of Defence, more than 30 members of the European Parliament, on the initiative of Lithuanian MEP Rasa Jukneviciene, signed a letter addressed to the European Commission President and Vice-President. The letter makes reference to the report published by the Lithuanian National Cyber Security Centre (NCSC) in September 2021, which identified, in analysed devices, phenomena that violated EU General Data Protection Regulations. In view of the risks in terms of cybersecurity, privacy and freedom of speech, the members of the European Parliament urged the Commission to “safeguard the privacy of mobile users and the freedom of the information space in Europe”.

Since the state of emergency at the Lithuanian/Belarus border, restrictions on press freedom at the border with Poland and Belarus have been documented. A decision not to allow the entry of journalists to the Belarusian border was taken by the head of the State Border Guard Service (VSAT). Reporters without Borders (RSF) denounced restrictions on the press and urged the governments of Poland and Lithuania to allow journalists to report on the border situation.

.@RSF_inter denounces excessive restrictions on #pressfreedom on the borders of #Poland & #Lithuania with #Belarus due to influx of migrants & #Russia’s military exercise. We urge both governments to allow journalists to report on the border issues which are of public concern. pic.twitter.com/D216kG1kIq

On 6th September 2021, a joint statement by several major local media outlets denounced the lack of access to the border section by the Lithuanian press and asked for a reversal of the ban. The statement, addressed to the Lithuanian government, was signed by Delfi.lt, 15min.lt, Lrytas.lt, TV3, Baltic News Service (BNS), ELTA, Diena Media News and LNK. In the statement, published by LRT English, they said:

“These ongoing restrictions severely limit the right of media outlets to receive and disseminate information vital to the public, on migrant returns and the adherence to human rights.[...] It is unacceptable to ban the work of journalists on the grounds that it may be exploited by another country. This cannot be a reason in a democratic country to restrict the freedom of the media and the public's right to impartial information”.

In a positive move, since 22nd November 2021, reporters have been allowed access to the border section but are required to remain 100 metres from the frontier, contrary to a previous requirement of maintaining a one-kilometre distance away. In addition, according to the measures, journalists must provide the time and details of their trip to spokespersons of both the Ministry of Interior and the State Border Guard Service. Journalists are not permitted in the migrants’ accommodation facilities. Additionally, NGOs will only be able to provide humanitarian assistance if they have a special permit.

Related to the border situation, Lithuanian authorities expressed their intention to launch an investigation into how media outlets and NGOs have access to information related to migrants’ movements before the border guards have this. This comes after LRT published reports on a group of migrants with children who did not have any contact with border guards. The necessity to investigate the matter was strongly emphasised by the Deputy Interior Minister Kęstutis Lančinskas. Lithuania has been pushing back refugees to Belarus since August 2021.

Separately, as covered in the previous Monitor update, the case involving the news outlet Atvira Klaipėda (Open Klaipeda) was reopened on 17th November 2021 by the Supreme Administrative Court of Lithuania (SACL). The portal had been accused of violating data protection rules, triggering a wave of solidarity from the Lithuanian media community.

High awareness has recently been spread regarding legislation introduced in Lithuania in 2009 which is criticised for legitimising homophobia, particularly in relation to content for minors. Activists denounced how the law resembles the “gay propaganda” legislation recently introduced in Hungary, which received high international resonance and was condemned by the European Commission. The Lithuanian measure, officially the Law on the Protection of Minors against the Detrimental Effect of Public Information, prohibits sharing with children under 18 information that “expresses contempt for family values (or) encourages [...] entry into a marriage and creation of a family other than stipulated in the Constitution of the Republic of Lithuania and the Civil Code of the Republic of Lithuania”. Albeit not explicitly referring to LGBTQI+ persons, activists underline how the 2009 measure may encourage homophobic tendencies and restrict free speech.

This legislation is also currently being challenged in the context of the European Court of Human Rights (ECHR) in a case previously covered on the CIVICUS Monitor, involving the publication of an LGBTI-friendly children’s book in 2013, by author Neringa Dangvyde Macatė. The distribution of the book had been suspended as it allegedly violated the aforementioned law.

The overpainting with black paint on a pedestrian crossing which showed a rainbow flag triggered a court battle between the Vilnius city council and the police. Before being painted over, as shown in a video published by member of parliament Tomas Vytautas Raskevicius, the crossing was colored with the symbol of the LGBTQI+ community in May 2018 to commemorate the International Day Against Homophobia, Biphobia and Transphobia. According to the head of the Communication Subdivision of the Vilnius County Chief Police Commissariat, Julija Samorokovskaja, the pedestrian crossing did not comply with Lithuanian regulations on roads and streets, and the rainbow was therefore removed. The municipality of the capital decided to take the case to court.

A new non-governmental organisation, Mothers for LGBTQ+ Children, was established and launched on 28th October 2021 to support equal rights and increase public awareness within Lithuanian society. One of the founders of the NGO, Rasa Račienė, the mother of a LGBTQI+ child, met on 25th October 2021 with President Gitanas Nausėda after addressing a public letter to him where she denounced the hatred faced by the LGBTQI+ community and families in Lithuania. During the meeting, Račienė and President Nauseda discussed, among other issues, same-sex partnerships. Ahead the meeting between President Nauseda and Račienė, he said: “When the mother speaks about bullying, about threats, we all face this phenomenon today, regardless of sexual orientation. [...] It will be really interesting for me to talk with her about her views on the persecution of other groups in society for thinking differently than this group”.

A support campaign in the form of a public gathering was held on 23rd October 2021 to show solidarity with Rasa Račienė. The initiator of the campaign, Dovilė Filmanavičiūtė, however, was fined 70 Euros for violating laws on gatherings for holding a protest without agreement and for staging it near the Presidency. The Lithuanian news website 15min underlined how the organisers of further protests staged near the Lithuanian Presidency were, in contrast, not fined.