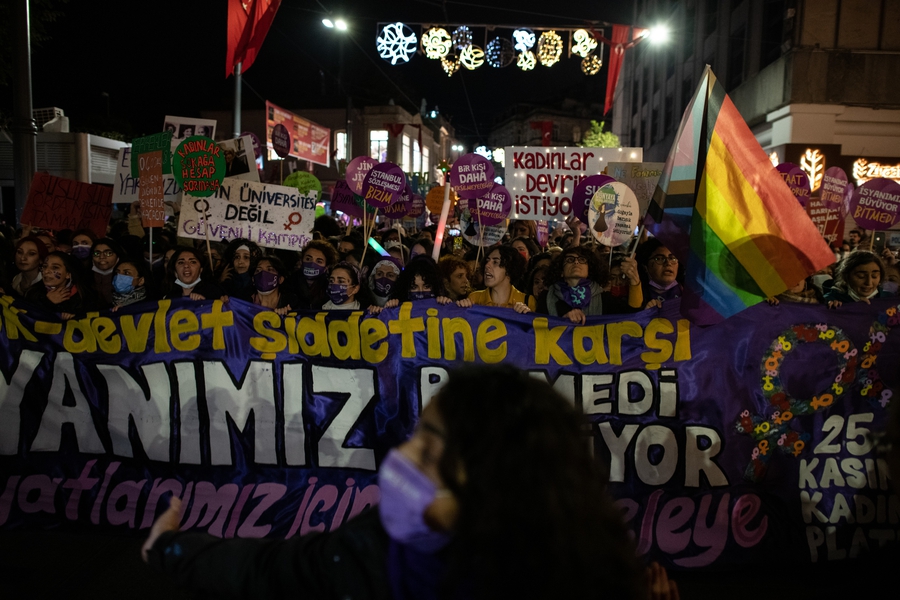 In December, the Council of Europe Committee of Ministers began the formal process of infringement against Turkey after in late November 2021 the Istanbul 13th high criminal court extended the imprisonment of philanthropist, activist, and founding member of the Open Society Foundation in Turkey Osman Kavala. Kavala has been detained for four years without conviction and is accused of funding Gezi Park anti-government protests in 2013 and attempting a coup in 2016. The decision of Istanbul’s court was strongly condemned by, among the others, Amnesty International. Previously, in October 2022, ambassadors of several countries signed a joint statement calling for the release of Kavala and for this reason was summoned by the Turkish foreign ministry. Turkish President Tayyip Erdogan had also declared them “persona non grata”, but after a few days, he stepped back since a new statement was issued that he deemed more acceptable.

Related to the 2016 coup, in its ruling in November 2021, the European Court of Human Rights (ECtHR) condemned Turkey for unlawfully arresting more than 400 judges and prosecutors after the failed 2016 coup for alleged linkages to the Gülen movement.

A new law on associations a concern

In October 2021, the Regulation Amending the Regulation on Associations was published in the Official Gazette. According to the analysis of the Regulation, with the new amendments, the procedures and principles for carrying out general assemblies and board meetings of associations electronically were partially determined but confusion remains. Associations now have 45 days instead of 30 to notify the local authority of the changes that occur in the place of residence, in the association's statute, in the association's membership, and the general assembly. Associations are now obliged to notify the local authority of aid sent by foreign associations and foundations to their branches and representative offices in Turkey. Moreover, they should notify the result of aid within 90 days after the aid is provided and attach some documents as proof. When it comes to multiple aids, associations will only need to provide a one-time notification. Audits of associations should be carried out every year according to the "risk assessment", but no further details were given on the meaning of this. It is also unclear in which “mandatory situations” auditors will not require a specific certificate to conduct their work.

According to the European Commission 2021 Report on Turkey, the serious backsliding of the environment for civil society continued, as they faced continuous pressure with increasingly limited space to operate freely. The means to limit the activities of CSOs included “recurrent bans, disproportionate interventions and excessive use of force in peaceful demonstrations, investigations, administrative fines and prosecutions against demonstrators on charges of terrorism-related activities”. In particular, it is argued in the report that the new law on preventing the financing of proliferation of weapons of mass destruction might further restrict the activities of human rights defenders and civil society. Nevertheless, organisations remain active and continue to make their voices heard.

According to the Global State of Democracy 2021 report, published by the International Institute for Democracy and Electoral Assistance in November 2021, Turkey has seen the world’s highest decrease in democratic rule between 2010 and 2020. The report argues Turkey has a “hybrid regime”, which means it has insufficient space for civil society and media. One of the most affected groups by this overall backsliding is LGBTIQ+ persons.

In November 2021, protests were held in several cities, calling for the resignation of the government, following a rise in exchange rates and increasing economic hardship. The Istanbul branch of the Progressive Lawyers Association reported that police severely intervened against protesters and arrested 55 of them. At least a dozen people were also arrested in the city of Mersin. A few days later, police intervened against members of the “We cannot make a living” group in Ankara while they were protesting for the same reasons, using tear gas on them and detaining some of them. Police also targeted journalists who were trying to film the protest. JinNews Ankara correspondent Öznur Değe was detained with handcuffs and her phone and camera were seized.

Separately, in October 2022, several NGOs from the Van province protested after holding a conference against a five years long demonstration ban that came into effect after the 2016 failed coup.

In November 2021, on the International Day for the Elimination of Violence Against Women, women marched in several cities to protest the government’s decision to withdraw from the Council of Europe Convention to eliminate violence against women (the Istanbul Convention), calling for its resignation. Police used tear gas and rubber bullets against protesters to disperse them. Several protesters were injured.

In October 2021, 45 students of Boğaziçi University were detained for attempting to set up a “resistance tent” in front of the Rector’s office after it had been already taken down once by University security. The students were released later that night and some the next day. Following this, a statement was released by the academics of the University condemning the detentions and demanding the resignation of the appointed rectorate, whose legitimacy is considered controversial and a threat to academic freedom The letter stated:

“University must be an environment where our students must feel secure without any conditions and can express their opinions freely. The blockading of such an environment by private security, undercover police officers, and riot police is unacceptable. These interventions aimed at decreasing the quality of education and undermining the grounds for commonsense causes a public loss that affects the entire society."

Later in the month, the appointed Rector Naci İnci obtained a restraining order against 14 of his students, 12 of whom were then sentenced to month-long restrictions by a court, while the other two were sent to prison due to other complaints. Law 6284, designed to protect women from domestic violence, was invoked for such restrictions. After this decision, women in Instanbul protested against the Rector’s misuse of a law that is meant to protect domestic violence survivors but has often failed to be enforced. They held banners “Enforce the Law on 6284 for Şebnems (a woman recently killed by a man in Turkey), not for Nacis."

On 6th November 2021, students who had protested at the beginning of October 2021 were suspended and will face disciplinary action.

In October 2021, the ECtHR ruled in the case Vedat Şorli vs Turkey, finding that the freedom of expression of the applicant was violated after he was sentenced to prison for insulting President Erdogan. Moreover, the Court argued that the domestic law used to condemn Şorli needs to be changed in line with the European Convention on Human Rights.

“We point out that expelling a Syrian citizen from Turkey would violate the principle of non-refoulment. Under this principle of international law, no refugee may be sent back to a country where their life would be in danger,”- said Erol Önderoğlu, Reporters Without Borders (RSF) representative in Turkey.