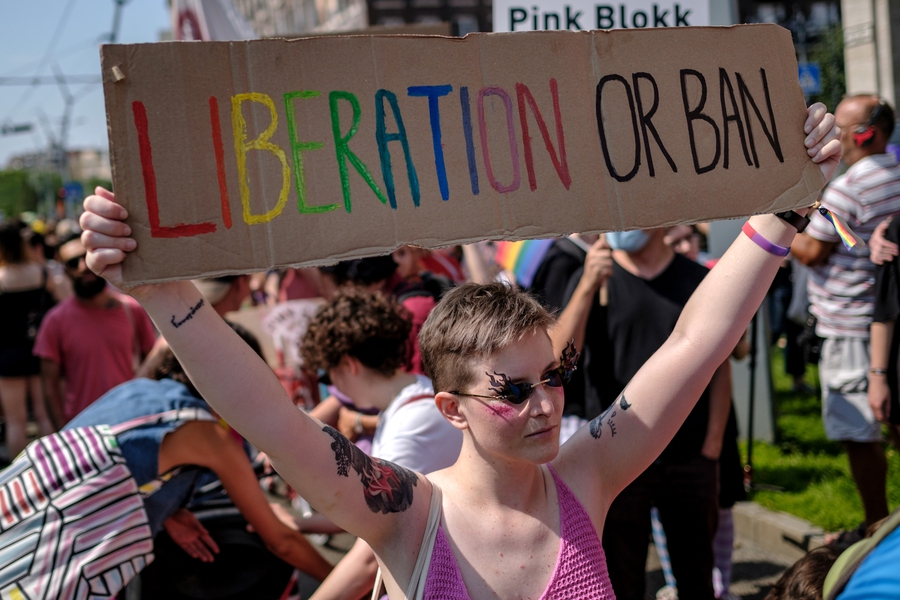 On 27th September 2021, the Hungarian parliament approved an extension of the state of emergency until 1st January 2022. The state of emergency is a special legal order that gives the government extraordinary powers it does not have under normal circumstances - for example, limiting certain civil rights. According to critics, the extraordinary powers are easy to misuse and are not justified under the current circumstances. The government could introduce all the necessary measures to fight the virus under the normal legal order.

In an independent, yet related development, on 28th October 2021, Hungary's government announced that it would allow private employers to require their employees to get a vaccination against COVID-19. By the end of October 2021, deaths due to COVID-19 had reached the same level last experienced in May 2021.

On 29th October 2021, the European Parliament submitted a lawsuit against the European Commission in front of the European Court of Justice. The lawsuit aims to force the executive to activate the so-called “conditionality instrument” so that the countries accused of breaching EU law, such as Hungary, do not receive funding. A few days later, on 2nd November 2021, Hungary’s human rights record was examined by the United Nations Human Rights Council’s Universal Periodic Review (UPR) Working Group. At the council session the leader of the Hungarian delegation, Minister of Foreign Affairs and Trade Péter Szijjártó, alleged that it was the European Union that was drifting away from its fundamental values while Hungary remained committed to those values.

The Urban Civic Fund (Városi Civil Alap) was set up by the Hungarian government in 2021 to replace the Norway Grants, shortly before the country lost its eligibility for the European Economic Area (EEA) and Norway Grants. According to the analysis of investigative journal Atlatszo, the first results of the state-financed funding program for NGOs are extremely politically biased. More than half of the top winners are ‘NGOs’ directly controlled by politicians of Fidesz, the governing party. Among the winners of the largest grants, it is difficult to find an organisation that is not linked in some way to the Fidesz elite. As previously reported, the Hungarian government gave up €220 million it was meant to receive from the European Economic Area (EEA) and Norway Grants Scheme after it was unwilling to accept the donor’s decision on who should distribute funds to civil society and wanted a state-owned organisation to do this job so that government-critical voices do not get funding.

On 23rd October 2021, about six months before the general election, Prime Minister Viktor Orban and his challenger Peter Marki-Zay held rallies in Hungary’s capital, Budapest. Despite the warnings of virologists and professional organisations, decision-makers did not feel the need to tighten up epidemiological measures and implemented zero measures for mass events honoring the national day dedicated to the suppressed anti-Soviet uprising of 1956.

Earlier the Hungarian government, under the emergency legal mandate, banned all demonstrations, first from 11th March to 18th June 2020, and then from 10th November 2020 to 23rd May 2021. The total ban on gatherings for more than ten months was unprecedented in Europe. In October 2020, the Hungarian Civil Liberties Union and the Hungarian Helsinki Committee asked the Ombudsman Ákos Kozma to investigate the legal norm of banning demonstrations and its implementation, which breaches fundamental rights. After 10 months, Ombudsman Kozma informed the watchdogs that he does not intend to investigate the abuses of the right of assembly.

Earlier in 2021, the Sub-Committee on Accreditation (SCA) of the Global Alliance of National Human Rights Institutions (GANHRI) recommended that the Hungarian Ombudsman’s Office be downgraded from status “A” to “B”, and thereby be stripped of certain rights in GANHRI. According to their report, the reason for the downgrading is that the Commissioner has not effectively engaged on and publicly addressed all human rights issues, including in relation to vulnerable groups such as ethnic minorities, LGBTQI+ people, refugees and migrants as well as constitutional court cases deemed political and institutional.

In an independent, positive development, the Hungarian Civil Liberties Union won a case at the European Court of Human Rights. In 2014, the police banned demonstrations staged by those who lost money on foreign currency loans in several places, among them in front of Prime Minister Viktor Orbán's house. The Court declared that the ban was illegal.

In mid-October 2021 (with effect from 31st October 2021), Mónika Karas, President of the National Media and Communications Authority (NHHH) and its Media Council resigned from her position. Karas was appointed in 2013 for a nine-year term. Under Karas’s leadership, the regulatory bodies have contributed to systematic declines in media freedom and the steady silencing of critical voices.

The Media Council, which is made up of the Fidesz ruling party, is the supreme watchdog of Hungarian media. It decides over frequency tenders and fines, and supervises the operation of the state news agency, MTVA, which, as online portal 444 reports, failed to report on the major political event of 2021, i.e. the opposition primaries. Karas’s early resignation opened the door for the ruling populist right-wing Fidesz party to decide on a new president for the next nine years before the upcoming general elections, thereby consolidating their power over a strategically important territory.

As reported previously on the CIVICUS Monitor, in mid-July 2021 Hungary made international headlines as evidence suggested that it used highly intrusive Israeli Pegasus spyware against journalists, lawyers, politicians and businessmen critical of the government. In September 2021, a new name was added to the list of about 300 targets: Dániel Németh’s, who is a photojournalist from Budapest investigating and documenting the luxury lifestyle of Hungary’s ruling elite. Németh’s phones were monitored in July 2021 while he was reporting on one of Prime Minister Viktor Orbán’s childhood friends, Lőrinc Mészáros, a former gas fitter who has become one of Hungary’s richest men in the past few years.

After four months of the government refusing to reveal any details about the purchase and use of Pegasus, on 4th November 2021, the chair of Parliament’s Committee on Defence and Law Enforcement, Lajos Kósa, admitted to journalists that the Interior Ministry had bought and used the software. As the online portal Hungary Today reports, according to the Fidesz politician, the Interior Ministry had agreed not to violate anyone’s human rights upon the purchase of the spyware and only used it for “legal” purposes. The content of the meeting of the Committee on Defence and Law Enforcement on the Pegasus case has been classified until 2050.

Media freedom defenders have called on the European Commission to immediately investigate the Hungarian government’s use of Pegasus spyware against journalists.

“The commission must establish the extent of Hungary’s use of Pegasus, identify what safeguards have been implemented and react to any abuses. Until such an investigation is carried out, the Pegasus revelations will continue to undermine journalists’ safety and have a chilling effect on what remains of independent media within the country. Robust and effective legal protection must be guaranteed within EU member states against unlawful surveillance by domestic intelligence, national security and law enforcement agencies to guard against human rights violations, including the right to freedom of expression and the right to privacy as protected under domestic, European and international law.”

Other incidents against journalists

As documented by Mapping Media Freedom, on 6th October 2021, Google revealed that 14,000 journalists, including several Hungarian journalists, were subjected to a government-backed phishing attack. Among the targets were many Hungarian journalists, including Tamás Bodoky, the editor-in-chief of the investigative media outlet Atlatszo, whose Gmail account was targeted in the hack. András Loke, chief editor of ittlakunk.hu and chairman of the jury of the Transparency Soma Award, and HVG journalist Ádám Bihari were warned of government-backed attacks on their Facebook pages. The global hacking campaign is linked to APT28 or “Fancy Bear”, a well-known organ of the Russian military intelligence agency.

Google said the hackers were working for APT28 (Fancy Bear) and targeted journalists, NGO and think tank members all over the world. https://t.co/ybsL7Nmpam

On 19th October 2021, the Hungarian Minister of State for International Communication failed to invite any critical and independent journalists to a press conference, who only learned about the conference on social media after it had taken place.

This is what #Hungarian government calls "press conference": politician talks + no journalists even invited = no need to avoid unpleasant questions, as there are no questions! (some govt. friendly outlets represented, just to spread word) #FreePress https://t.co/lY9gDY50B9 pic.twitter.com/9Md3g6s1iB

On 15th September 2021, Hungary’s media regulator, the Media Council of the National Media and Communications Authority (NHHH), published guidelines for broadcasters on how to comply with new anti-LGBTQI+ propaganda law. The new guidelines relegated some films portraying homosexuality or gender identity issues to the same age group restrictions as gory horror movies. Publication of the guidelines follows the June adoption of a law banning the “display and promotion of homosexuality” among under-18s (“Anti-LGBTQI+ Law”). The law has been heavily criticised by rights groups and the European Union.

According to online portal 444, the local press has recently reported a clearly increasing number of complaints about breaching the Anti-LGBTQI+ Law, confirming the fears of human rights watchdogs who warned that the law may result in increasing homophobia in the country. The following reports were documented:

In a report by Háttér Society submitted to the Venice Commission on 18th November 2021, various other consequences of the law have been highlighted.

In a related development, Hungary’s Supreme Court, the Curia, rejected one of the questions in the referendum initiated by Prime Minister Orbán in July 2021, as a follow-up to the international criticisms received of the anti-LGBTQI+ Law. The question was: "Do you support the availability of non-neoplastic treatments for minor children?" The Curia argued that “...a valid and effective referendum on the relevant question would result in a conflict of fundamental rights that could only be resolved by the amendment of the Basic Law. Therefore, a referendum on the specific issue has been rejected.”

“The Curia, while defending human dignity, refused to validate one of the government's referendum questions. The government planned to put a total of five questions to a referendum during its homophobic and transphobic referendum initiative. It has stated that the right of minors to receive certain treatments cannot be deprived as a general rule, because it would prevent them from exercising their fundamental rights. Children also have the right to self-determination and physical integrity, and a general prohibition on the decision to use treatment would deprive them of the right to self-determination, " - the Hungarian Civil Liberties Union (HCLU).

However, in an unprecedented move, on 2nd November 2021 the government submitted a constitutional complaint against the Curia's decision, which is pending at the Constitutional Court. At the end of November 2021, the government proceeded with the four other questions, with the Parliament adopting a resolution approving the referendum. The resolution was adopted via an extraordinary and fast-tracked procedure, with a majority of 129 votes, while opposition parties abstained. While the date for the referendum is yet to be set, it is up to the President of the Republic to decide. However, it is likely to be held on the same day as the general elections. Meanwhile, the Government has said that it is planning a “robust campaign” on the referendum, adding it “most resolutely rejects” LGBTQI+ propaganda targeted at children.