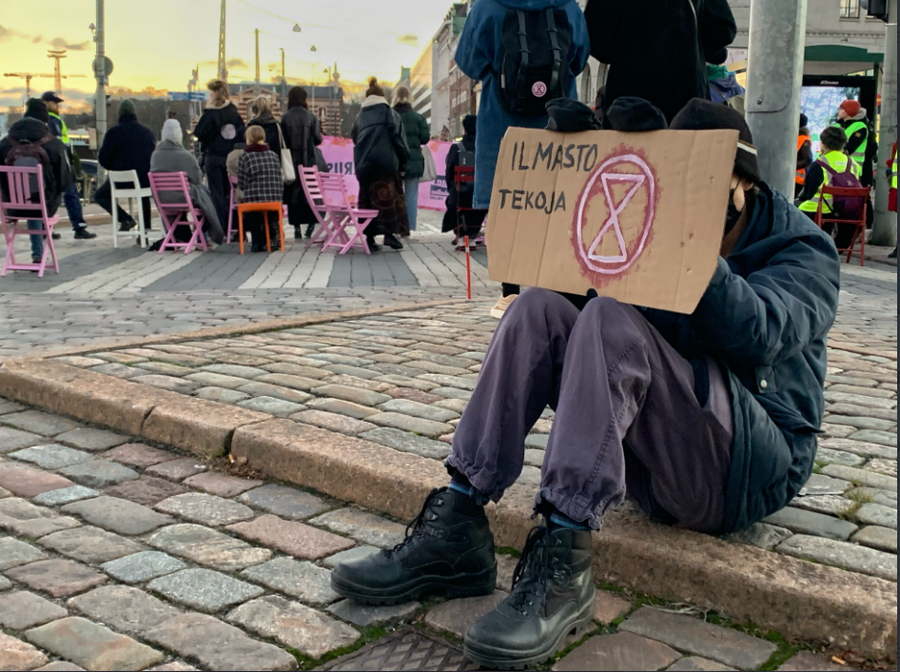 On 12th October 2021, a Helsinki court froze the assets (amounting to 20,000 Euros) of Elonvaalijat over violation of fundraising laws. Elonvaalijat is a registered association which supports the work of Extinction Rebellion Finland (Elokapina). According to police reports, the violations took place on two separate occasions: the first between 26th April 2021 and 18th June 2021 and the second on 15th September 2021. According to police, the association was in violation of Section 6 of Finland's Money Collection Act which states that fundraising cannot be used to “fund activities that clearly endanger public order or security, or that are illegal." More specifically, police argue that the funds were used to support Elokapina activities that have led to alleged public obstruction, disobedience towards police officers and aggravated breaches of the peace. Moreover, police suspect other irregularities concerning the maximum amount of approved fundraising notifications received by the association. However, Elonvaalijat has denied all accusations and stated that it intends to appeal the decision.

It also added that the police’s investigation conveniently began around the time when Elokalina’s August Rebellion actions were planned.

“We first received information about the suspicion of a crime against us through the media on Wednesday, September 29, the same day that the Autumn Rebellion began. In addition, the seizure of a security deposit of 20,000 euros demanded by the police was carried out on Wednesday, October 6, just after the end of the Autumn Rebellion, i.e when we would have started to reimburse Elokapina for the expenses caused by the Autumn Rebellion. In view of these factors, it is difficult for us to avoid the idea that the police have deliberately sought to use criminal investigations against us as a means of influencing Elokapina's operations.”

On 12th November 2021, 14 activists from Elokapina were arrested while protesting in front of Helsinki City Hall. Police accused them of disobedience towards a police officer. The Helsinki Police Department reported that the group did not communicate to competent authorities that the protest would happen and said that the gathering caused some traffic disruptions.

The goal of the protest was to push the Finnish government to declare the climate and environmental crisis and was intended to coincide on the last day of the COP26 in Glasgow.

Additionally, the national police board launched an investigation into the earlier detention of 52 climate defenders during one August Rebellion action which took place outside the Government palace during October 2021 (see previous update), where protesters glued and chained themselves to the building. Protesters were accused of public obstruction, disobedience towards police officers as well as aggravated breaches of the peace.

The proportionality of the police’s response has been questioned after they issued a statement that the security situation had worsened, resulting in the evacuation of the president, ministers, and other government officials. After this, they admitted that they had failed to accurately access the level of threat posed by the action.

On 29th October 2021, the Deputy Prosecutor General of Finland brought charges against three journalists from the leading daily newspaper Helsingin Sanomat for disclosing state security secrets and intending to disclose secrets. The journalists charged are Laura Halminen, Tuomo Pietiläinen as well as Kalle Silfverberg, who was the last head of the political news department of the news outlet at the time when the information was published. Charges were not brought against editor-in-chief Kaius Niemi or the managing editor, Esa Mäkinen, who were both investigated. The three face charges under the Penal Code, which involves the “unlawful acquisition or transmission of such information for the purpose of disclosure”.

The charges stem from an article published on 16th December 2017, referencing classified documents, leaked years before, revealing information on the staff and operations of the Finnish Defence Intelligence Agency (VKoeL) and its Defence Forces Message Testing Centre in Tikkakoski. During this time, the house of journalist Laura Halminen was searched by the police and her equipment, including the laptop and phone, was confiscated. A preliminary investigation carried out by the police and completed in 2020 concluded that the journalists did not use unlawful means to obtain the information. The charges were therefore limited to the disclosure of classified information.

Helsingin Sanomat responded to the charges, stating that the information disclosed was already in the public sphere and that its content was of public interest. Furthermore, editor-in-chief Kaius Niemi denounced the threat to freedom of information in Finland that these charges represent.

“We are very disappointed and worried about a situation […]. In an open democracy in the West, it is unsustainable to seek to criminalise journalistic work in this way".

If they are found guilty, they will face up to four years in prison, with a minimum punishment of four months.