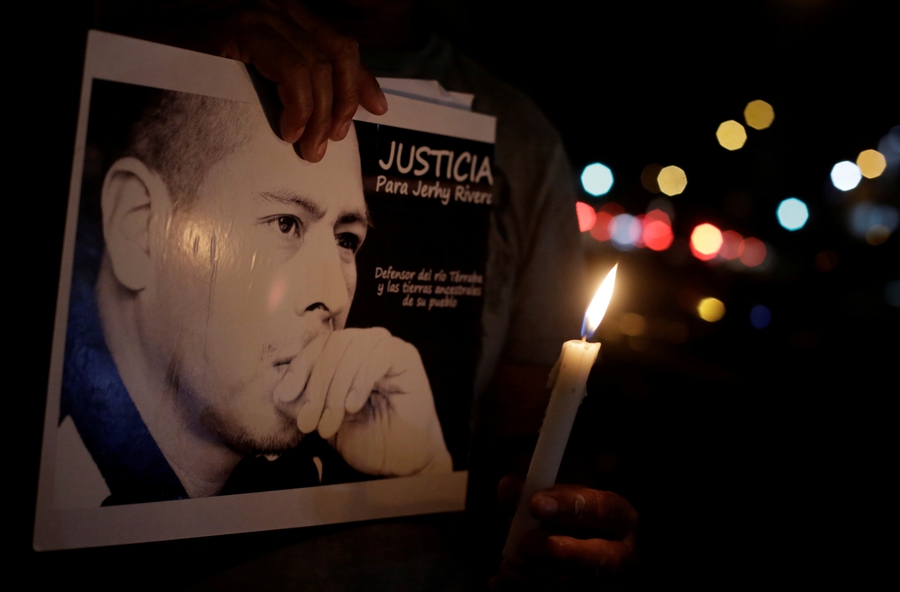 An activist holds a picture of Jehry Rivera during a vigil after his killing. 25 February 2020, REUTERS/Juan Carlos Ulate.

On 19th October 2021, the criminal court of Buenos Aires ordered the opening of a trial against a suspect in the murder of Brorán Indigenous leader Jehry Rivera Rivera on 24th February 2020. The Prosecutor’s Office charged the suspect with the crimes of homicide, aggravated threats and illegal carrying of a firearm. According to the police investigation, the Indigenous leader was killed in a public area where about 40 people were circulating. At least three individuals would have attacked and immobilised him, allowing the main suspect to shoot him at least twice with a firearm. The investigation pointed out that land disputes may have motived the killing.

During the preliminary hearing on the case, activists with Coordinadora de Lucha Sur Sur (South-South Struggle Coordinator) protested in front of the court to demand justice for Rivera and for Indigenous peoples. The civil society group commented on the court’s decision, saying:

“The decision of the Criminal Court is a step towards justice in this case; but it is essential that justice be done in the politically motivated murder of Sergio Rojas Ortiz, Uniwak of the Bribri People of Salitre, and in the dozens of aggressions and human rights violations against the Indigenous Peoples that remain unpunished to this day.”

In a separate but related development, President Carlos Alvarado Quesada stated during the UN Climate Change Conference (COP26) that “Indigenous peoples are the greatest guardians of the forests and land” and highlighted the country’s forest conservation programme. However, Indigenous organisations that are part of the Coordinadora de Lucha Sur Sur responded, underscoring that Costa Rican authorities have not had the capacity or political will needed to guarantee Indigenous people’s rights to life and integrity. The coalition highlighted the killings of Indigenous leaders and the impunity for attacks and threats against Indigenous populations.

On 7th November 2021, Nicaraguans exiled in Costa Rica protested against fraudulent presidential elections in Nicaragua. Waving Nicaraguan flags, thousands of people marched in San José shouting slogans such as “Long live free Nicaragua!” (“¡Viva Nicaragua libre!”). Several protesters called on the international community not to recognise the election results. On the same day, Costa Rican President Carlos Alvarado announced that the country would not recognise Ortega’s re-election because the process was not credible, independent or fair.

On 30th September 2021, a judge issued a resolution that press associations said censored the Ministry of Justice and Peace from publicly referring to penitentiary issues. The order, reportedly meant to “ensure that the fundamental right to justice is exercised free from interference and control of any kind,” was announced to the press by Minister Fiorella Salazar in a video. On 1st October 2021, the Asociación Nacional de Empleados Públicos y Privados (National Association of Public and Private Employees - ANEP) filed a writ of amparo with the Constitutional Chamber against the resolution, which they said violated fundamental rights to freedom of expression, opinion and access to information, as well as freedom of the press.

Judge Mayra Acevedo responded to these claims denying that the resolution prohibited the Ministry of Justice and Peace from accounting for issues under their purview. She said the resolution referred to a specific ongoing legal case, where a ruling was pending on whether a prison in San Jose should remain closed or be reopened. Acevedo also said the resolution was applicable for a short period and sought to warn members of the Ministry against making statements that could be viewed as pressuring the courts regarding the case.

Still in October 2021, the Constitutional Chamber dismissed ANEP’s writ of amparo based on a constitutional provision saying amparo is not available against judicial decisions and actions of the judiciary. The Chamber added that this does not imply that the entity “endorses, supports or validates the actions” of judge Acevedo but that they did not even enter into the merits of the case because “it is not possible to challenge a judicial decision through amparo proceedings.” An ANEP representative said they regretted this decision, and that the Chamber did not take its share of responsibility in safeguarding constitutional rights.