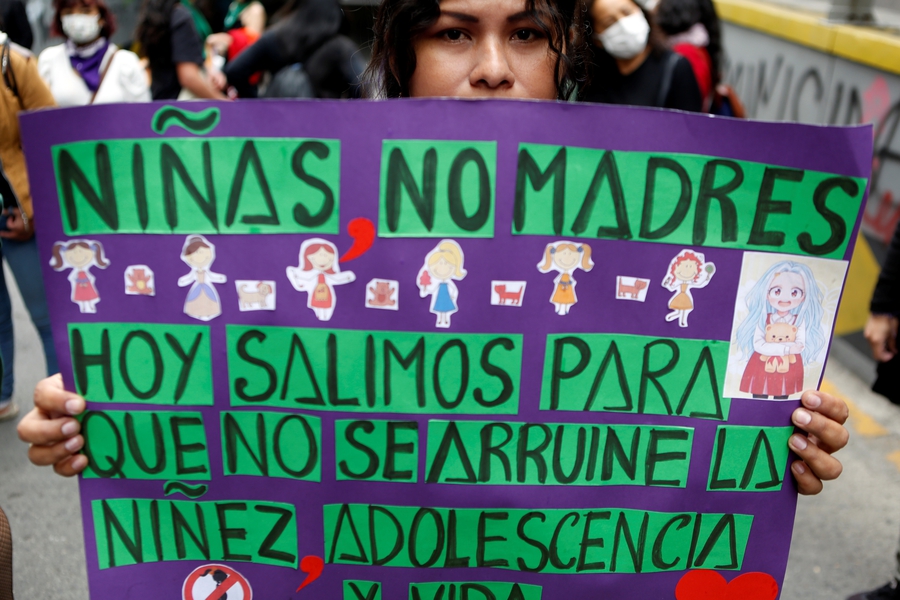 A woman holding up a sign reading "Girls not mothers" at protest for safe abortion. 29 October 2021, REUTERS/Manuel Claure.

Amparo Carvajal of the Asamblea Permanente de Derechos Humanos La Paz (Permanent Human Rights Assembly La Paz - APDHLP) was also threatened on social media by two men who claimed to belong to a group demanding justice for massacres perpetrated by law enforcement in Senkata and Sacaba in 2019. In a video shared in September 2021, the individuals said Carvajal’s house should be burned. Carvajal has advocated for the release of people she says are political prisoners, including former interim president Jeanine Añez. On 6th October 2021, the offices of APDHLP in La Paz were vandalised with graffiti.

On 12th October 2021, Bolivia’s Ombudsperson’s Office expressed concern about statements by public figures questioning the legitimacy of the wiphala, the emblem adopted as a flag by many Andean Indigenous peoples. During a public event in Santa Cruz on 24th September 2021, members of the political opposition removed a wiphala flag moments after it had been raised. Opposition leaders afterward disqualified protesters who carry the wiphala and said that the symbol has been used by ruling party Movimiento al Socialismo (MAS) to create societal divisions. The Ombudsperson’s Office said the wiphala is a symbol of Indigenous resistance recognised by the country’s Constitution, and that statements discrediting it are discriminatory.

During its 70th session, the United Nations Committee on Economic, Social and Cultural Rights (CESCR) reviewed Bolivia’s report on the implementation of the International Covenant on these rights. In their concluding observations, the independent experts expressed concern about security conditions for human rights defenders and recommended that Bolivia adopt a comprehensive policy to ensure their protection, including measures to prevent attacks – in particular against Indigenous defenders. They also called on the country to combat impunity for these attacks.

On 25th August 2021, thousands of goldminers marched to La Paz in protest against the government, who they said has failed to implement economic measures to help the sector recover in the context of the COVID-19 pandemic. During the protest, organised by mining cooperatives, miners blocked streets in the country’s capital for two days to demand a meeting with government representatives.

On 30th September 2021, hundreds of Indigenous peoples arrived in Santa Cruz after a 550km march which started almost 40 days earlier in Trinidad, Beni department. The Indigenous demonstrators carried Patujú flags and symbols, calling for the protection of their ancestral territories. They presented a list of 15 demands, which included the creation of an Indigenous fund, the repeal of laws and regulations that affect their territories, as well as healthcare and education policies for Indigenous populations. They also highlighted increasing conflict for territory and violence by settlers which affect Indigenous peoples.

On 11th October 2021, opposition groups organised anti-government protests in several Bolivian cities, including La Paz, Cochabamba, Santa Cruz and Tarija. The groups condemned decisions by the Luis Arce government and rejected Bill 218 against financial crimes, proposed by ruling party lawmakers. They claimed that the legislation, which addressed issues such as money laundering and terrorism financing, would give the State special powers which could be used for political persecution. As detailed in the ‘Expression’ section of this update, press associations also expressed concern about the bill. In La Paz and Cochabamba, the police used tear gas to disperse demonstrators who had blocked streets. At least two protesters were detained in Cochabamba.

On 29th October 2021, feminist groups protested in front of the offices of the Episcopal Conference in La Paz to demand respect for the right to safe and legal abortion, after the case of pregnant 11-year-old reignited the debate around abortion in Bolivia. In October 2021, news outlets reported that an organisation associated with the Catholic Church had intervened convince the young girl and her family to back down from a decision to interrupt the pregnancy, which is permitted by law in Bolivia in cases of rape. Feminist groups also organised marches for abortion rights a month earlier on 28th September 2021, International Safe Abortion Day.

On 21st September 2021, journalist Carlos Quisbert with Página Siete was assaulted and detained by police while covering a conflict between coca leaf growers in Villa Fátima, La Paz. Quisbert told news media that a police officer on a motorbike pushed him several times, and when he reacted and tried to defend himself, eight police officers surrounded him, beat him up and fired tear gas in his face. He was detained and held in a police station for over five hours. Press associationscondemned the police’s actions and said they had received reports that police officers also used tear gas against another journalist covering the conflict. On 24th September 2021, the commander of the department’s police publicly apologised to Quisbert.

On 16th October 2021, Justice Minister Ivan Lima shared a message published by Pope Francis on Twitter calling on news media to “end the post-truth logic, disinformation, defamation, calumny and the sick fascination with scandal and dirt.” On his own Twitter post, Lima named six news media outlets and implied that the Pope’s message applies to their work. The Asociación Nacional de la Prensa (National Press Association - ANP) condemned the minister’s verbal aggression against the press. ANP also highlighted that government officials have attacked media outlets covering contentious issues such as the pre-trial detention of former interim president Jeanine Añez and the conflict between coca leaf producers and the government.

A report on Bolivia at the 77th General Assembly of the Inter-American Press Association (IAPA) underscored the risks to freedom of expression posed by two bills under consideration by legislators in Bolivia.

One of the legislative proposals highlighted was Bill 218 against financial crimes and terrorism financing, the “Law Against the Legitimation of Illicit Proceeds.” The legislative proposalcontained an article that press organisations said could undermine the secrecy of journalistic sources in Bolivia, particularly those who expose corruption. Article 11 of the bill determined that professional secrecy and confidentiality could not be invoked to deny information requested by the agency in charge of financial investigations. The agency responded to criticism saying that the article did not apply to the press or journalists. The bill was approved by the Chamber of Deputies but was removed from discussion in the Senate in October 2021, after the government backed down from the proposal following opposition protests.

Meanwhile Bill 253 regulating the production of official statistics would give the state-run National Statistics Institute (INE) powers to obtain and centralise data. According to the report to the IAPA, civil society organisations expressed concern that the legislation could restrict access to information by giving a government agency the power to decide what information can be disclosed. The bill was approved by the Chamber of Deputies in September 2021.

Bolivia was ranked 15th out of 22 countries analysed in the 2021 Chapultepec Index, a barometer of the IAPA that measures levels of freedom of the press and expression in the Americas. The country was among those with “Partial Restriction” to freedom of expression, along with Argentina, Mexico and Guatemala.