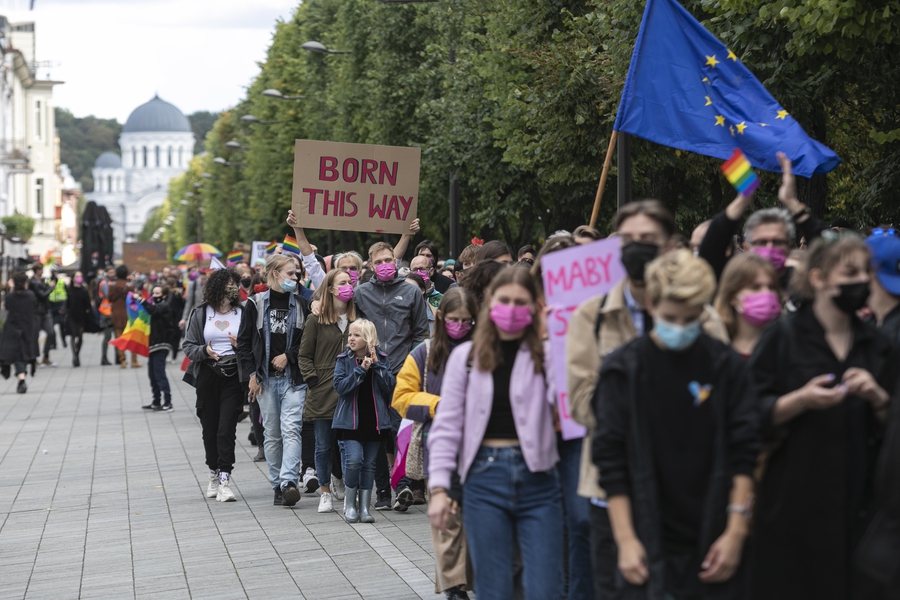 Lithuania has experienced a steady rise in COVID-19 infections since July 2021 and is ranking 1st in the European Union in terms of a 14-day case notification rate per 100,000 inhabitants in mid-October 2021. Nevertheless, the government is not considering the possibility of a new lockdown. At the beginning of August 2021, the government launched a plan to administer a third dose of the COVID-19 vaccine to immunocompromised individuals at least six months after their second vaccine dose, with the intention to extend it to further categories.

The influx of migrants arriving from Belarus at the Lithuanian frontier has persisted in the past few months. However, the Lithuanian Border Guard has used “push-back” measures to prevent migrants from entering the country and flights from Baghdad to Minsk have been suspended. The situation in the refugee camps on the Lithuanian-Belarus border have raised strong concerns due to scarce hygienic, health and safety conditions, particularly for women and children. On 8th September 2021, the European Court of Human Rights (ECtHR) issued interim measures, preventing Lithuania from pushing back five Afghan nationals to Belarus, who were seeking international. protection.

Despite challenges in the preceding months, the Kaunas Pride march took place at the beginning of September 2021, involving more than 2,000 demonstrators. Representatives of the LGBTI community and participants presented a list of 14 requests to Viktorija Cmilyte-Nielsen, the speaker of the Lithuanian Parliament, related to protection, social safety and non-discrimination, education, health, marriage, partnership and adoption rights.

"We do not demand exclusive rights, we just want to be equal before the law, as provided for in Article 29 of the Constitution of the Republic of Lithuania. The aim of the Kaunas Pride march as a protest is to draw attention to the social problems facing the LGBTQ + community in Kaunas and Lithuania.”

"You are not our mayor", shouted Kaunas Pride participants, when they reached the building of the city administration. Kaunas Mayor Visvaldas Matijošaitis, self-declared "normal, healthy, women-loving man" insisted that the main avenue is not a place for such parades.

The Kaunas municipality had used all available legal means to prevent the march from happening, but the court ruled against the municipality, allowing the peaceful demonstration to occur.

According to media reports, counter-protesters tried to block the path of the march, threw eggs, hurled insults and clashed with the police. The event resulted in 22 individuals being detained and five pre-trial investigations.

The attempt to halt the pride event came shortly after homophobic statements were made by the President of Lithuania, Gitanas Nausėda, who said that he is against teaching LGBTI related content in educational institutions. As reported by The Baltic Times, the President commented: “We have the Constitution and, when quoting its provisions, we should also quote its Article 38, which, for instance, defines a marriage very clearly. There is a single very good, decent way if we want to change our certain fundamental matters enshrined in the Constitution – it is necessary to amend the Constitution instead of pretending that it does not exist”.

Making history with 2,000 people in attendance, Kaunas Pride in Lithuania held its first Pride Parade. A series of hurdles, including fighting court battles up to the Supreme Court, was overcome as organizers locked in the parade route one day prior. More: https://t.co/muHA8JXsCv pic.twitter.com/tjK41zZRKV

In mid-August 2021, a rally was organised in Vilnius to protest against the government’s new COVID-19 measures, most importantly in relation to its vaccination strategy and the National Covid Certificate requirement. Demonstrators called for the resignation of the Lithuanian Government. The protests took the form of riots near the Seimas, culminating in violent clashes between protesters and the police and resulting in pre-trial investigations and the detentionof 38 people.

Another rally was held in Vilnius on 10th September 2021, organised by the Lithuanian Family Movement, gathering more than 4,500 people, with the purpose of protesting against LGBTQI+ rights - including the ratification of the Istanbul Convention - and against COVID-19 measures limiting the rights of individuals without immunity. Although the permit for the rally was previously denied, it was eventually authorised by the Vilnius municipality, albeit with spatial constraints.

Concerns have grown as a consequence of a warning from the Lithuanian Ministry of Defence to avoid and discard a specific model of mobile phone produced by Chinese company Xiaomi. A reportissued by the Lithuanian National Cyber Security Centre (NCSC) emphasised instances of censoring configurations incorporated in the devices which can be remotely activated, aimed at detecting and banning 449 key terms in Chinese. Terms which are censored include, “Free Tibet”, “democracy movement”, “Long live Taiwan independence”. Moreover, according to the government-issued report, encrypted user data in the same Xiaomi model under scrutiny were sent to servers in Singapore, therefore not conforming with the EU General Data Protection Regulation.

However, Xiaomi representatives strongly denied the allegations regarding their mobile devices and confirmed adherence to EU Regulations.

Relations between Lithuania and China were already tense as a consequence of the decision by Lithuania and Taiwan to establish reciprocal representative offices. Most notably, Lithuania agreed to adopt the name “Taiwan” for the embassy, rejected by Beijing which prefers “Taipei” instead. In response, the Chinese ambassador to Lithuania was recalled to his own country on 10th August 2021 and, consequently, the ambassador of Lithuania to China was requested to leave the country.

As a result of a ruling by the Supreme Administrative Court of Lithuania in early October 2021, which found that journalist Atvira Klaipeda (Open Klaipeda) had violated data protection rules, Lithuanian journalists and media showed solidarity with the case. The news outlet had been accused of violating the EU General Data Protection Regulation (GDPR) by using the names of individuals involved in a case of corruption. The Lithuanian media community condemned the Court’s decision through a joint statement published by LRT English, stating that GDPR is often used as a pretext to limit freedom of information:

“We, Lithuanian journalists and media representatives do not approve that, under the guise of national or international law, some public authorities, including administrative courts, could substantially limit the definition of a public person and thus deprive society of its right to information”.

In view of the overall negative reaction to the ruling, the Chairman of the Supreme Administrative Court of Lithuania, Gintaras Kryževičius, is considering proposing a re-examination of the case.

On 7th September 2021, the Council of Europe’s Sexual Orientation and Gender Identity Newsroom reported that the Grand Chamber of the European Court of Human Rights (ECHR) will decide on the case involving the LGBTI-friendly children’s book “Amber Heart” written by Neringa Dangvyde Macatė, published in 2013. After an appeal by several Lithuanian family associations due to the depiction of same-sex couples in the stories included in the volume, the distribution of the book was restricted and eventually suspended by the publisher, the Lithuanian University of Education (LEU). Family associations and public authorities claimed that the stories propagandised the concept of family in contrast with the Lithuanian Constitution and violated the Law on the Protection of Minors Against the Detrimental Effect of Public Information. Macatė, who died in 2020, fought against the publisher for five years, after which the case was rejected by Lithuanian courts. Therefore, in 2019 the author submitted the case to the European Court of Human Rights, with complaints under Article 10 and Article 14 of the Convention.