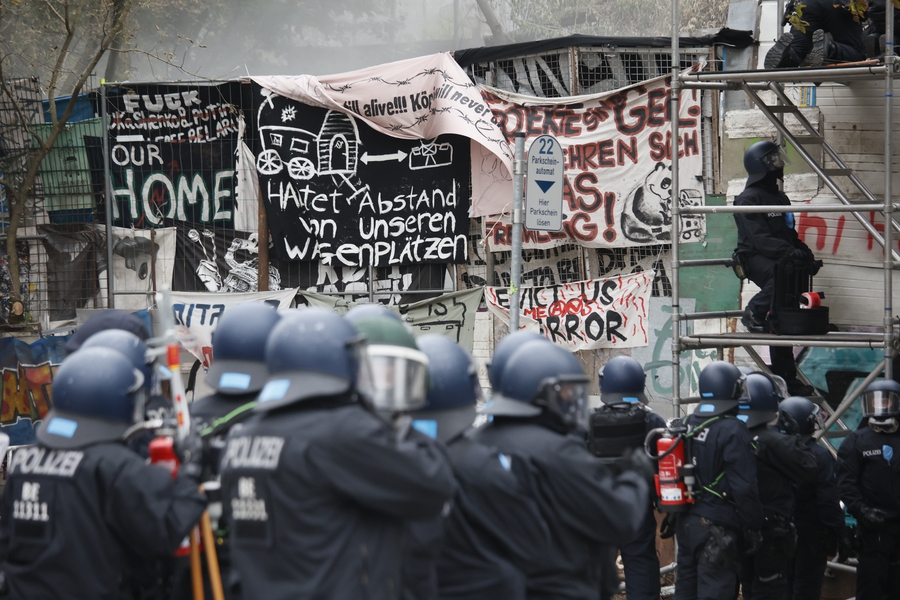 Protests erupted over the evacuation of some residents at Kopi camp (Photo by Carsten Koall/Getty Images).

On 15th October 2021, the Kopi camp in Berlin was evacuated as a result of a resolution from the Berlin Court of Justice in June 2020. The building is deemed to be one of the last symbolic projects of the anarchist left-wing scene in Berlin. Around 30 people live in construction trailers on the 2,600 square-meter property, next to a house occupied in 1990 on the former strip of the Berlin wall. Home to about 30 residents, the building is currently not threatened with eviction. Instead, part of the area which was occupied by 50 people reportedly living in precarious conditions in vehicles and wagons were ordered to leave by a court order in June 2021.

Supporters of the Köpi project demonstrated against the eviction from the area in the months prior to intervention by police. Additionally, a riot took place on the same day of the eviction, with people occupying the site attempting to resist the eviction, and scuffles broke out between officers and a small group of protesters. Deutche Welle reports that police said 37 people were cleared from the site and 20 people were arrested. A protest involving around 8.000 people – according to the police – took place in Berlin's Kreuzberg district. The police classified the demonstration as “aggressive” and over 20 people were arrested, according to Berliner Morgenpost newspaper. Around 500 protesters gathered in Hamburg on the evening of 15th October 2021 to show solidarity with those affected by the eviction.

The caravan park on Köpenicker Straße has provided housing for 50 people for decades. This Friday, the police are planning to throw people onto the street to make room for realty speculators.https://t.co/OywdTLMIxA pic.twitter.com/g7CDM97Jj3

During one of the demonstrations that took place days before the eviction of Köpi in Berlin - specifically on 9th October - police officers detained freelance photojournalist Ralph Pache for a short period. Prior to this, Pache has taken a picture of a police officer who had pushed a demonstrator from behind. The officer then asked the journalist in an “aggressive tone” to put the camera away and he also grabbed Pache’s press ID, which was hanging around his neck. Pache said that he believed that the officer wanted to confiscate his camera. The police stated that the temporary detention was because Pache had filmed the officer up close and that he had not been recognisable as a journalist. However, Pache believes that the real motive for his arrest was because he had documented the police officer on camera.

Attacks on journalists during a right-wing party rally

Two journalists working for vue.critique and Pixel_Roulette were attacked during a demonstration by the German right-wing party AFD on 15th November 2021 in Dresden. The theme of the rally was “Freedom instead of 2G”, referring to COVID-19 measures which permit only vaccinated and recovered people to be granted access to certain places. In one case, a journalist was threatened with physical violence by a protester. In the second case, a photojournalist was physically attacked by a demonstrator who hit the journalist multiple times in the stomach with a flagpole. Although the police intervened late, they managed to catch the protester.

On 6th November 2021, a freelance photojournalist was physically attacked by a group of neo-Nazi protesters in Leipzig during a violent demonstration staged by the Querdenker movement against the COVID-19-measures and vaccination in Germany. On this occasion, Querdenker followers and neo-Nazis protested together. The photojournalist was targeted by a group of neo-Nazis, was pushed to the ground and hit by numerous people. The attack resulted in a shoulder injury. The aggression was filmed.

Freelance journalist forced to delete a video of violent arrest

On 19th October 2021, police put pressure on Tom Wills, a British freelance journalist, to delete video footage of a violent police arrest that he witnessed outside the immigration office in Berlin. The journalist, who was there for personal reasons, began recording a police officer pushing a man to the ground. Immediately, the security personnel blocked the journalist’s view although he stated he was a journalist. One security guard asked him to show his press card, which he did not have on him at that time. The journalist suggested that an editor could send proof, but this was not accepted. The security guard asked the journalist to delete the video, stating that Wills did not have the right to film the incident. Access to the immigration office was denied to the journalist until he deleted the recording. Wills highlighted that he was in a very vulnerable position, as he could not skip the appointment. Moreover, the security guard kept the journalist's ID until he deleted the footage. The incident was sent to the police complaints office. Jörg Reichel, State Director of the German Union of Journalists defined the incident as a “scandal”.

“The behaviour of the security guards is totally unacceptable. Mr. Wills was dependent on the appointment and being blackmailed like that is unprecedented. This was a humiliating experience.”