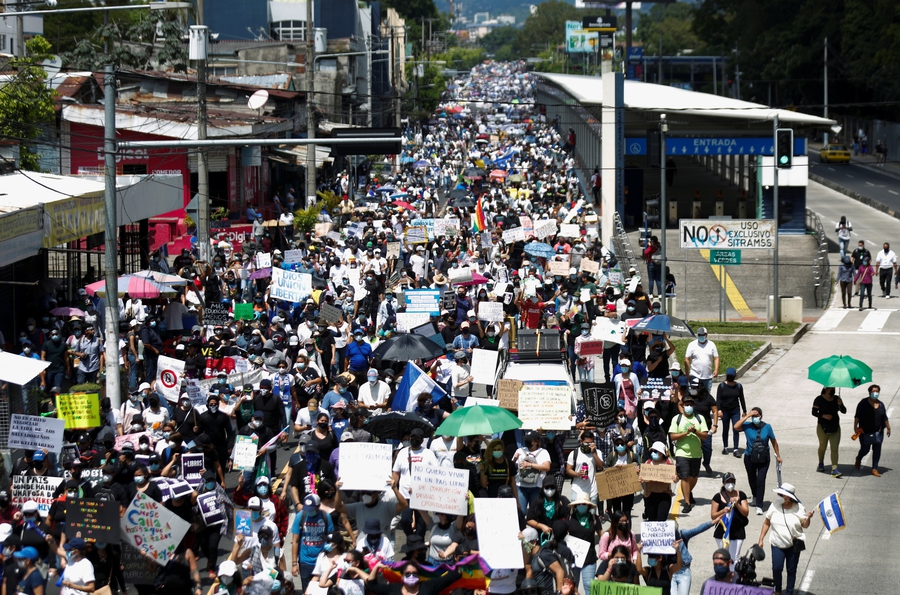 On 3rd September 2021, the newly installed judges in the Constitutional Chamber of the Supreme Court published a resolution stating that presidents can serve two consecutive terms. The decision, taken by the magistrates appointed after lawmakers allied with President Nayib Bukele replaced five of the Court’s former judges, paves the way for Bukele to run for re-election in 2024.

In reaction, the Electoral Court said it would follow the Supreme Court’s order despite the fact that the country’s Constitution bans consecutive re-election. Civil society organisations and opposition parties reacted, condemning the decision.

The recent ruling by the Constitutional Chamber and scepticism in the country over the rushed adoption of Bitcoin were among the issues fuelling anti-government protests in September 2021.

On 5th September 2021, feminist group Colectiva Amorales carried out a protest performance in San Salvador against the decision by the Constitutional Chamber of the Supreme Court allowing President Nayib Bukele to run for re-election. A video of the direct action went viral on social media and was shared and criticised by Bukele and his supporters. Days later, the group said their members who participated in the performance had been harassed, stigmatised and received death threats on social media. They called on the Human Rights Ombudsperson to act to guarantee the right to protest without discrimination, censorship and threats from the president or any person or institution.

On 15th September 2021, when Central American countries celebrate independence from Spain, thousands of people joined a protest against the Bukele government. Among the issues highlighted by protesters were the imposition of Bitcoin as legal currency, systematic attacks on journalists and obstacles imposed by the government in the trial of perpetrators of the El Mozote massacre. The demonstrators also denounced attacks on democracy, including authorities’ efforts to reform the country’s constitution. News outlets reported that these were the largest anti-government protests since Bukele took office in 2019.

On 30th September 2021, army veterans, former civil war combatants and labour unions organised another protest in San Salvador. They marched toward the Legislative Assembly to express their condemnation of several government decisions, including the implementation of Bitcoin and a reform establishing compulsory retirement for judges with 30 years of service or over 60 years of age. While the march was peaceful, news outlets reported that police officers prevented buses with protesters from reaching the demonstration.

In separate protests, on 28th September 2021, the International Safe Abortion Day, reproductive rights groups organised a march in San Salvador. The demonstrators intended to deliver a document with their demands to the Legislative Assembly, but were met with a barricade in front of the building. Their demands include the decriminalisation of the pregnancy termination procedure on three grounds: when the pregnancy is unviable or the result of sexual assault and when it poses a risk to the woman’s life.

On 17th September 2021, President Nayib Bukele’s legal adviser Javier Argueta threatened reprisals against two journalists with GatoEncerrado. In a message on Twitter, Argueta said journalists Karen Moreno and Beatriz Benítez should be “careful about the infractions they would be committing” if they did not disclose the anonymous sources of a report. The message referred to an article revealing that the legal adviser had had a private meeting with Electoral Court magistrates before the Supreme Court published their resolution enabling consecutive re-election. The Inter American Press Association expressed concern about high-ranking officials engaging in intimidation of journalists and recalled that the secrecy of journalistic sources is protected by international jurisprudence.

On 6th October 2021, civil society organisations Cristosal, ICEFI, FESPAD, Fundación DTJ and others denounced that El Salvador’s authorities had not published the draft Budget Law for 2022, which was submitted to the Legislative Assembly by the Finance Minister on 30th September 2021. While the Ministry presented the projected spending for key areas such as education, health and security, the draft law was not publicised. The civil society organisations said that full transparency is required on the budget, as it is the main instrument defining the government’s priority areas for spending, sources of funding and tax use. They said that failing to publish the Budget Law is a violation of people’s right to access information. According to news reports, the Ministry of Finance has also failed to provide data on projected revenue growth and other information needed to conduct an economic analysis of the draft budget.

On 10th September, organisations in the Coalición por la Libertad de Asociación (Coalition for Freedom of Association) expressed concern about democratic backsliding in El Salvador and called on the international community to speak out against attacks on fundamental freedoms in the country. The organisations highlighted the increasing public vilification of civil society by high-ranking public officials, as well as threats and attacks on journalists by public officials and law enforcement.

In one example, in an op-ed published on 16th August 2021, the Presidency’s press secretary Ernesto Sanabria accused civil society organisations of corruption and of acting out of self-interest. In the article, Sanabria named six civil society groups as examples of groups who “do not contribute to the country.”