Restrictions and attacks on journalists, protesters; reprisals against activists in the Maldives 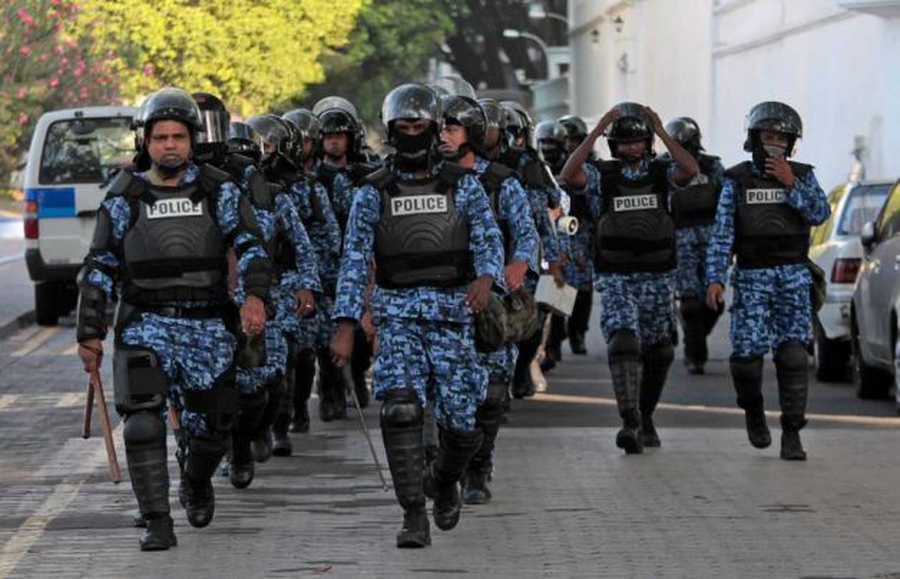 Despite legislative reforms and the opening up of civic space following the November 2018 elections, civic space remains ‘obstructed’ in the Maldives.

Human rights groups have called for better efforts to guarantee fundamental freedoms and to create an enabling environment for civil society. More needs to be done to protect human rights defenders from attacks and smear campaigns and to bring perpetrators to justice. There continues to be concerns about press freedom and restrictions on protests.

In recent months, civil society has raised concerns about a new bill that threatens to force journalists to reveal sources. There have been reports of excessive force by the police against protesters and journalists with impunity. There has still been no justice for families of human rights defenders Yameen Rasheed and Ahmed Rilwan. In September 2021, the UN published a report on reprisals against civil society which included cases in the Maldives.

#Maldives: Legislators must reject a provision of the proposed Evidence Bill that would allow courts to compel journalists and media outlets to reveal their sources.https://t.co/kW7mRR1Chj

In a move that could affect press freedom, the Evidence Bill introduced in parliament on 30th August 2021 could force journalists to reveal their sources.

Article 136 of the proposed Evidence Bill includes an affirmation of Article 28 of the Constitution, which guarantees press freedom and the protection of sources. However, it also adds two exceptions left at the discretion of the court under which courts can compel journalists to reveal their sources.

Journalist bodies have raised concerns over the bill. The Maldives Media Council (MMC) said the provision would “infringe on the rights guaranteed for journalists in the Maldivian Constitution”. They also said this would lead to misuse of the law as well.

In a joint statement on 28th September, human rights and press freedom groups said that the obligation to disclose journalistic sources is in contravention of the right to freedom of expression protected in Article 19 of the International Covenant on Civil and Political Rights, to which the Maldives is a party, and that “the vagueness of the criteria set out in the exceptions, along with the near-impossibility of reaching an objective and qualitative assessment on an anonymous source, will lead to a significant reversal of press freedom in the Maldives and carries the risk of generating a wider effect of fear and self-censorship.”

They further added that: “Without a doubt, the mere enactment of this bill into law, as it is, will have a dramatic impact on the work of journalists, including losing access to important sources, who might refuse to talk to journalists due to fear of being exposed in a court of law.”

Concerns have been raised about the intervention of a Maldives parliamentary standing committee into a complaint against the media by Indian diplomats in the Maldives.

In June 2021, the Indian High Commission in the Maldives had requested that the government take action against two media outlets ‘Dhiyares’ and the ‘Maldives Journal’ for alleged “articles and social media posts attacking the dignity of the High Commission, the Head of the Mission, and members of diplomatic staff". Following this, the ruling party and the foreign ministry criticised the media outlets and urged the country’s media to refrain from publishing “false news and accusations”. In July 2021, the standing committee on independent institutions of the Maldives Parliament registered a complaint with the Maldives Media Council on the issue.

Media organisations have slammed the actions of the parliamentary committee, saying it represents a “clear conflict of interest” in its role and responsibility. The Maldives Journalists’ Association (MJA) said it was concerned that the parliamentary committee, which has the power to summon and question members of the Maldives Media Council and hold them accountable, became directly involved as a complainant in an investigation overseen by the MMC. “Practices like this will introduce political influences to the work of the MMC, which is legally required to investigate ethics violations impartially,” the MJA said in a statement.

The International Federation of Journalists (IFJ) said: “An independent media council must be allowed to be just that – independent. It is inappropriate and a violation of media rights for an adjudicator on the council’s impartiality to be able to interfere and pursue its own cases. We remind the parliamentary committee of this responsibility and for it to refrain from such actions.”

Following this the MMC has cautioned the Maldivian media outlets over reporting about foreign diplomats in the country.

The Maldives Journalists Association launches its report titled ‘Chasing Justice on impunity for crimes against journalists’ in Maldives on the 22nd of August. @mjamaldives pic.twitter.com/hnmBo5RzpO

The Maldives Journalists’ Association (MJA), the Maldives affiliate of the International Federation of Journalists (IFJ), released a report in August 2021 on impunity for crimes against journalists in Maldives.

The report documents the history of violence and impunity for crimes against journalists and the types of threats and violations that journalists continue to face. The report highlighted the lack of safety for journalists, online harassment, intimidation and gender-specific threats on journalists.

The report also looks at the efforts of the incumbent government to fight against impunity and how Islamist ideologies that encourage religion-based violence are undermining the rule of law and delivery of justice on crime against journalists in the Maldives.

The opposition Progressive Party of the Maldives (PPM) said that police had used excessive force in breaking up its protest on 19th September 2021. The protest was reportedly held over the negligence of the Gender Ministry in fulfilling their responsibilities.

A statement issued by the party said the police used excessive force on protesters and that many people sustained injuries as a result. Two protesters were hit with police shields, which caused injuries to their legs. Pepper spray was also used on peaceful protesters and many of them were arrested.

Once again, Maldives Police has enforced brutality towards local journalists covering a protest. We strongly condemn the incessant abuse and inhumanity practised by Police towards reporters who were simply performing their duties. pic.twitter.com/icjQKi14jS

The MMC condemned the actions of the police and called on the relevant authorities to investigate the matter and take necessary action. They also stressed that “obstructing journalists from performing their professional duty in line with the freedom of the press guaranteed to them – is absolutely unacceptable, no matter who it comes from”.

This is not the first time there have been reports of restriction and excessive force against protesters under the guise of curbing the pandemic. As previously documented, in May 2021, police used excessive force against protesters and journalists. The CIVICUS Monitor has also documented crackdowns on protests by opposition political parties in early 2021.

Still no justice for families of Yameen Rasheed and Ahmed Rilwan

Justice for slain blogger Yameen Rasheed, killed in 2017, and disappeared journalist Ahmed Rilwan, missing since 2014, continues to remain elusive despite some developments over the last few months.

The Commission on Deaths and Disappearances (DDCom), which is investigating the cases announced in August 2021 that a witness protection programme would be established due to witnesses’ reluctance to give testimony for different reasons.

Former President Abdulla Yameen and Former Commissioner of Police Hussain Waheed were summoned in August 2021 to the DDCom for questioning over the 2014 disappearance and death of journalist Ahmed Rilwan. While the details of the line of questioning remain confidential, it is reported that Waheed was summoned on allegations of obstructing the investigation.

Meanwhile, Rilwan’s family called for action against former Minister of Home Affairs Umar Naseer, who had accused Rilwan of being connected with a religious extremist group. On the seven year anniversary of Rilwan’s disappearance on 8th August 2021, the Rilwan and Yameen Foundation and the Association for Democracy in the Maldives called on the government to expedite the investigation into Rilwan’s disappearance and to end impunity for the perpetrators.

The Criminal Court trial into the death of Yameen Rasheed is set to conclude in November with a judgement in December 2021. The state has charged six individuals with first-degree murder over Yameen's death.

The family of Yameen Rasheed has repeatedly raised concerns about police negligence and prosecutorial failures during the investigation and the trial hearings. The hearings that began in 2017 were held behind closed doors on the pretext of national security concerns. Subsequent hearings were marred by delays and repeated cancellations. In the course of the trial, several witnesses for the prosecution withdrew their statements or refused to testify, citing threats and intimidation. Some witnesses have also alleged torture in detention.

Reprisals against activists and civil society

In September 2021, the UN Secretary-General published a report on intimidation and reprisals against those seeking to cooperate or having cooperated with the United Nations, its representatives and mechanisms in the field of human rights.

The report highlighted cases in the Maldives, including the online vilification and threats by religious groups and individuals against members of the women’s human rights organisation Uthema, following the publication of its submission to the Committee on the Elimination of Discrimination against Women. In May 2020, following the online posting of the submission, a coordinated social media campaign was reportedly launched against Uthema, suggesting that its content contravened Islam. The campaign was reportedly led by religious groups and individuals, including religious scholars working in State institutions. The NGO was labelled as an “apostate group” and as an anti-Islamic organisation. Some of the posts made explicit references to individual members of the organisation and included threatening statements.

The case of human rights organisation Maldivian Democracy Network (MDN), which was arbitrarily dissolved by the government, was also mentioned following the 2016 publication of a report on radicalisation on its website. MDN also experienced online harassment, intimidation, threats and death threats against its members. Following the MDN’s presentation of a joint submission to the November 2020 UPR of the Maldives, the NGO and some of its members were the target of another coordinated media and online vilification campaign, including threats. Due to the continued serious threats, MDN’s members have relocated abroad. In August 2020, the MDN filed a suit in the Maldives Civil Court against the arbitrary closing of its organisation. The case is ongoing.