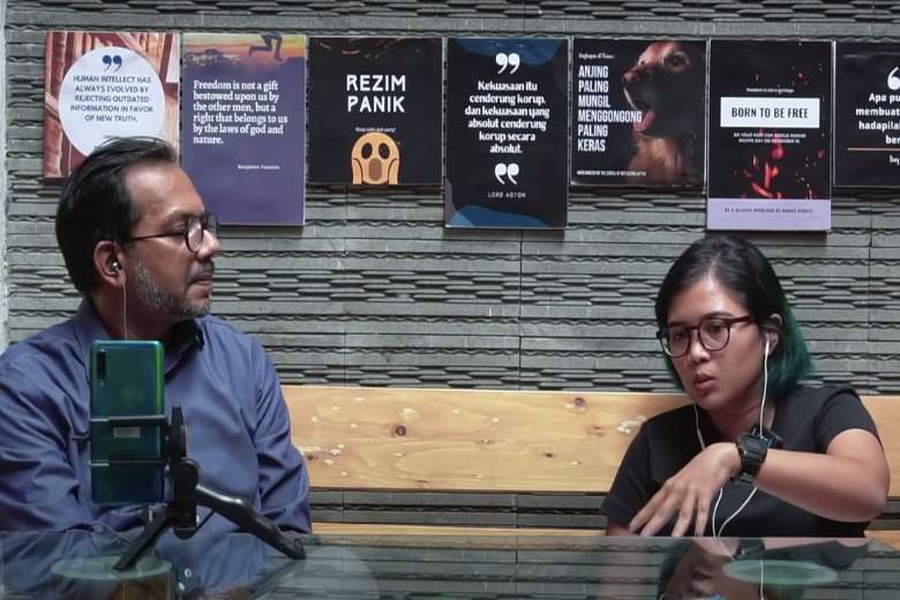 Activists and critics continue to face various challenges when speaking up in Indonesia. In recent months, activists have been targeted for comments they made during an online talk or for reporting on corruption. An academic has been jailed for defamation while street artists are being silenced for a mural and graffiti critical of the state. A Papuan activist facing trial has been hospitalised while there has been a lack of accountability for excessive force and other violations by the security forces during several protests related to Papua.

Two human rights defenders - Fatia Maulidiyanti from the Commission for the Disappeared and Victims of Violence (KontraS), and Haris Azhar, the Executive Director of Lokataru - are facing harassment for comments they made during an online talk show on YouTube around links between the military and mining concessions in Papua province.

In the video published on 20th August 2021, the two human rights defenders discussed the results of research undertaken by several human rights organisations on the involvement of current and retired army personnel in a gold mining business in the Blok Wabu area in the Intan Jaya district of Papua. According to the research, military operations with a presence in the Intan Jaya area to deal with armed groups could also have an economic motive of occupying areas where the mines will be located.

During the video discussion, the human rights defenders referenced one of the mining companies involved, PT Tobacom Del Mandiri, a subsidiary of the Toba Sejahtera Group whose shares are owned by the Coordinating Minister for Maritime Affairs and Investment, Luhut Binsar Panjaitan.

On 26th August, Luhut Binsar Panjaitan issued a subpoena to Haris Azhar and Fatia Maulidiyanti. In the subpoena, both were asked to explain to the minister the motive for posting the video. Both were also asked to apologise publicly within five days to the Minister via Haris Azhar's YouTube channel, on mass media and online media, and to promise not to repeat the act. If this was not done, Panjaitan’s counsel would take legal action. Both have refused to apologise.

In response, The Observatory for the Protection of Human Rights Defenders condemned the harassment of Haris Azhar and Fatia Maulidiyanti which the group said “seem to be only aimed at punishing them for their legitimate human rights activities and for exercising their right to freedom of expression”. They further called on the authorities “to put an end to any acts of harassment - including at the judicial level”.

In February 2019, Dr. Mahdi voiced his concern about the university’s hiring procedure in a WhatsApp group of faculty and staff members. In particular, he criticised the process for selecting successful candidates from the civil service test to join the Faculty of Engineering and questioned the conduct of the ‘leadership ranks’ of the university. He did not name any faculty members. A complaint was then filed by the dean of the Engineering Faculty and criminal defamation charges were brought against Dr. Mahdi under Article 27(3) of the Electronic Information and Transactions Law (ITE Law).

In April 2020, he was convicted to three months’ imprisonment and a fine of 10 million rupiah (USD 680). In June 2020, his appeal to the Banda Aceh High Court was rejected and on 29th June 2021, the Supreme Court rejected the cassation plea submitted by Saiful Mahdi and upheld the lower court’s guilty verdict.

Concerns have also been raised by human rights groups about the ITE law and how it has been used to prosecute individuals exercising their right to freedom of opinion and expression, as well as thought, conscience and religion. The vague and overbroad legislation has often been used to arrest, prosecute and punish activists, journalists and government critics.

Authorities on the hunt for artist behind ‘Jokowi: 404 Not Found’ graffiti in Tangeranghttps://t.co/jTsUYtYi9F#jakarta #graffiti pic.twitter.com/B6FSIi3WSd

In August 2021, the creators of street art containing criticism of the government were threatened with criminalisation by the authorities. The mural that was painted over had an image that allegedly resembles President Joko Widodo, which reads “404: Not Found” in Tangerang, "Forced to be Healthy in a Sick Country" in Pasuruan and “the real epidemic is hunger”. The authorities also accused those involved of insulting the President as “a state symbol’.

The incident sparked criticism from the online community, who quickly turned the image and the phrase “404: Not Found” into a rallying cry for freedom of expression in the country. In response, the authorities doubled down on their attack on civil liberty by cracking down on people selling T-shirts bearing that image. A 29-year-old man in Tuban, East Java, was questioned by the cyberpolice squad after peddling the T-shirts on his Twitter account.

Teo Reffelsen from the Jakarta Legal Aid Institute (LBH) said that the removal of the street art “is a clear proof of the decline of democracy”. He added: "Murals and graffiti containing criticism of the government are forms of expression and aspirations conveyed through art”.

Moeldoko had demanded an apology from ICW for accusing him of being involved with PT Harsen Laboratories, the producer of the drug Ivermectin. The group stated he was also seeking profit from the rice business while serving as the Indonesian Farmers Harmony Association (HKTI). The two are being investigated for violating articles 45(3) and 27(3) of the draconian Electronic Information and Transactions Law (UU ITE) and Articles 310 and 311 of the Penal Code.

The start of the trial of West Papuan political prisoner Victor Yeimo which was due to begin in Jayapura on 26th August 2021 has been delayed after he fell ill and had to be hospitalised. On 20th August, a medical examination report showed Yeimo has been diagnosed with empyema of the gallbladder, tuberculosis, hypocalcemia and leukocytosis. He also has a history of gastric and lung disease.

According to Amnesty International he has been held in solitary confinement at a detention facility run by the Police’s Mobile Brigade unit in Abepura, in a cramped and poorly ventilated cell which has further worsened his pre-existing medical condition. UN Special Rapporteur on human rights defenders Mary Lawlor had also raised concerns about his health.

A court ruling on 26th August instructed the prosecutor to postpone Yeimo’s prosecution so that he could be treated at a public hospital in Jayapura. However, he was only moved to the hospital on 30th August after pressure from his lawyers and civil society.

As previously documented, in May 2021, police arrested Victor Yeimo, a pro-independence activist and international spokesperson of the West Papua National Committee (Komite Nasional Papua Barat or KNPB), who has been vocal about human rights violations perpetrated by the Indonesian security forces in Papua.

He faces 11 charges including treason for his involvement in 2019 anti-racism protests in the province and across Indonesia. The protests were triggered by racist insults against Papuan students by the authorities on Java island in August 2019. There were also incidents of rioting and destruction of buildings, in which Yeimo has denied his involvement.

Protestors against extension of Special Autonomy, which was forced through today, was blocked by Indonesian police and military.

The protest was led by Sayang Mandabayan—ex political prisoner convicted with treason. pic.twitter.com/TTU7GwgorT

Protests against the unilateral renewal of the Papua Special Autonomy Law that took place in several cities in July and August 2021 were met with excessive force.

Police arrested 23 students and activists in Jayapura on 14th July 2021, and four protesters were injured. On 15th July, 18 demonstrators were arrested in Kaimana, West Papua, and a protest in Manokwari was blocked.

Another 50 protesters were arrested and beaten in front of the House of Representatives in Jakarta on 15th July 2021, just prior to the passage of the law. One student who took part in a protest in Jakarta told Amnesty International that security forces racially abused him before he was arrested. He said: “I was dragged down and taken far from the action, then I got punched about seven times. When I tried to escape, the police pulled me in and stepped on me, on my shoulders and thighs, and called me “monkey”. Two other protesters in Jakarta said that security forces also called protesters “monkey” while pushing them into the police truck.

A protestor who participated in the demonstration in Sorong on 19th July said that police officers beat him as he was arrested. He said: “I was kicked in the stomach and on my head. I was arrested because I only asked the National Police Chief for help to free the protesters who were arrested by the police.”

According to Amnesty International, on 16th August 2021, security forces opened fire on protesters in Yahukimo, injuring one person. One protestor told Amnesty International he heard multiple gunshots, and that several bullets were also found close to where the protest took place. In a protest in Jayapura on the same day, protesters confirmed the use of water cannon and beatings with rubber batons and guns by security forces.

The Special Autonomy Law in West Papua was first enacted in 2001 and has now been extended for another 20 years, with some concerning new amendments. The originally-enacted law had itself long been rejected by many West Papuans as failing to realise meaningful autonomy.

Eighteen articles of the revised law were amended, and two articles were added, with serious implications for issues of decentralisation and autonomy. According to Article 76, the central government can now decide on the creation of new regencies and districts. This has been opposed by many West Papuans because it could lead to further marginalisation and militarisation in the region. Two sections of Article 28 were omitted, which removed the right to form local political parties. A new rule is now in place that the vice president will have an office in the provinces to oversee the implementation of the Special Autonomy Law.