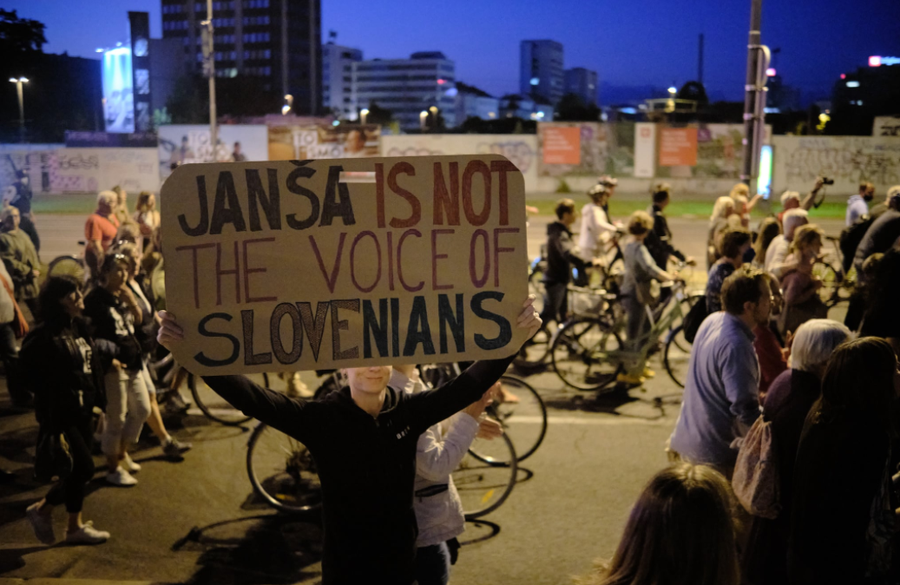 On 1st September 2021 the Slovenian government proposed an amendment to the Act on Public Law and Order introducing fines for indecent behaviour towards officials. The amendments raise concerns for freedom of speech in the country, amid ongoing anti-government protests which have been staged for over 70 weeks.

The amendments follow an incident when anti-government protesters happened to meet Prime Minister Janez Janša and the Minister of the Interior by chance at a mountain hut below Mt Triglav, Slovenia's tallest peak, and the ministers used the opportunity to confront protesters. They released a barrage of criticism against the protesters, while the PM labelled protesters as the patients of a psychiatric hospital.

When introducing the amendment the government stated that “threats against MPs and other senior representatives of the state have intensified lately”, referring to an incident several months ago when a small group of individuals who opposed COVID-19 vaccines confronted and verbally attacked several MPs at the entrance of the parliament in Ljubljana.

The proposed amendment to the Act on public law and order specifies that a person “arguing with, shouting at or behaving indecently to a public official who is conducting their official duties, or to a high-level representative of the state, MP, member of the National Council or the government, a Constitutional Court or Supreme Court judge, or their family members” could face a fine of up to €1,000. The new legislation would allow fines to be handed out on the spot if police detect such behaviour.

The proposal has already been endorsed by the government and will now be put to a parliamentary vote. The opposition parties have decried the motion as “an arrogant attempt to stifle protest” and “yet another repressive way of silencing the people.” Later in September 2021, the Home Policy Committee approved a further amendment to make indecent behaviour towards anyone punishable by a fine.

Public broadcasting agency STA has gone without funding for more than 235 days following the government’s decision to block their funding at the beginning of 2021. This is part of Prime Minister Janez Janša’s ongoing systematic attack against media and journalists in the country, with the STA’s survival relying on public crowdfunding. Despite a recent positive ruling from the Administrative Court in August 2021, which recognised and acknowledged that the funding blockage will cause significant damage to STA, the Government Communication Office (UKOM) has failed to meaningfully address the issue and UKOM’s contract with the STA remains unsigned. As it stands, the contract makes proposals that would significantly interfere with the STA’s work, adjusting financing monthly in accordance with whether UKOM deems STA’s content to be of “public service” or not, rather than financing STA with 12 equal payments. The STA continues to operate, but reported that September 2021 will be the last month in which they will be able to pay staff salaries. Meanwhile, calls from the international community to restore funding continue, including most recently from the President of the International PEN Centre, Jennifer Clement, supported by a number of International PEN Centres worldwide.

Representatives of STA staff sent a letter to top EU officials in August 2021, noting that despite calls to restore the financing of the STA, the issue has still not been resolved. Moral support by senior representatives of the EU unfortunately no longer suffices, the letter reads.

“It is with sadness that the shrinking staff at the STA – a tenth of the staff have left since the start of the funding problems – can now report that nothing has happened. The government continues to engage in actions that are intentionally pushing us into a dead-end, a point at which we must give up either our independence or our jobs.”

“It is necessary to take more decisive, perhaps even unprecedented steps, to protect freedom of the press. Absent that, this will mark a new defeat of democratic values that the funding fathers of the European Union were fighting for.”


In September 2021, STA and UKOM agreed to resume talks aimed at signing the annual agreement to fund the STA public service.

In a continued crackdown on media freedom in Slovenia, Director of Programmes at RTV Slovenija, Natalija Gorščak, was dismissedon 20th August 2021 by newly-appointed Director General Andrej Grah Whatmough. A council meeting convened during the holiday period in August 2021 failed to reach quorum or reach a decision within 15 days, and as a result Director General Whatmough unilaterally took the decision to dismiss Gorščak. Mapping Media Freedom reported that this is just one in a series of repeated attacks against RTV Slovenija by Prime Minister Janez Janša’s government over what the government sees as biased coverage. Director General Whatmough has alleged that the motivation for dismissal is due to Gorščak not taking action to address low viewership of television programmes, violating the rules on jurisdiction over the broadcaster, and failing to exercise due diligence in checking the conditions of business cooperation with RTV Slovenia. However, Gorščak has retorted that the allegations were fabricated, and evidence was cherry picked just so that she could be dismissed. Gorščak has said that the real reason she was dismissed is because of her refusal to support the director's proposed demands regarding staffing and programming changes. The Association of Slovenian Journalists also reported that the allegations against Gorščak were unfounded and had the sole purpose of "replacing the director as quickly as possible because she protected journalistic autonomy by refusing to back their proposal for the dismissal of Manica Ambrožič Janežič". The RTVS news programme said that they were concerned about the dismissal, and sent a letter to RTVS Director General Whatmough and the RTVS programme council. The Global Network for Press Freedom also expressed concern over Gorščak’s dismissal, highlighting that the move “could open the door for politically-motivated dismissals of editors and journalists at the public broadcaster.”

IPI is concerned this move could open the door for politically-motivated dismissals of editors & journalists at public broadcaster. pic.twitter.com/FK04YlRV5v

Following the removal of Gorščak, critics of RTVSLO believe that Ambrožič is to be dismissed next. Related to this, on 15th August 2021, the leader of the Slovenian National Party, Zmago Jelinčič Plemeniti, posted a comment on Twitter hinting that Ambrožič, editor-in-chief of the news programme of the Televizija Slovenija (TVS), should be afraid. The tweet came on the eve of a decision by the RTV Slovenia programme council about the future of Gorščak. The tweet was reported to the police, however no action was taken. Ambrožič has been the target of regular smears, threats and online harassment.

"As the editor-in-chief of IP TVSLO, I have received many threats, insults and harassment. Since mid-May, there have been protesters in front of the RTV Slovenia headquarters, demanding a meeting with me and occasionally expressing threats....Threats and harassment cause me discomfort, which I reported to the police,”- Ambrožič (translated from Slovene).

In another development, the government is increasingly attacking the Information Commissioner, an independent state body responsible for ensuring respect for the right to public information and the right to personal data protection. The Commissioner has been subjected to smear campaigns and a request for dismissal, endorsed on social media by PM Janša, due to her interventions calling for the respect of legal provisions on personal data protection when new digital tools for checking the recovered-vaccinated-tested requirements are introduced.