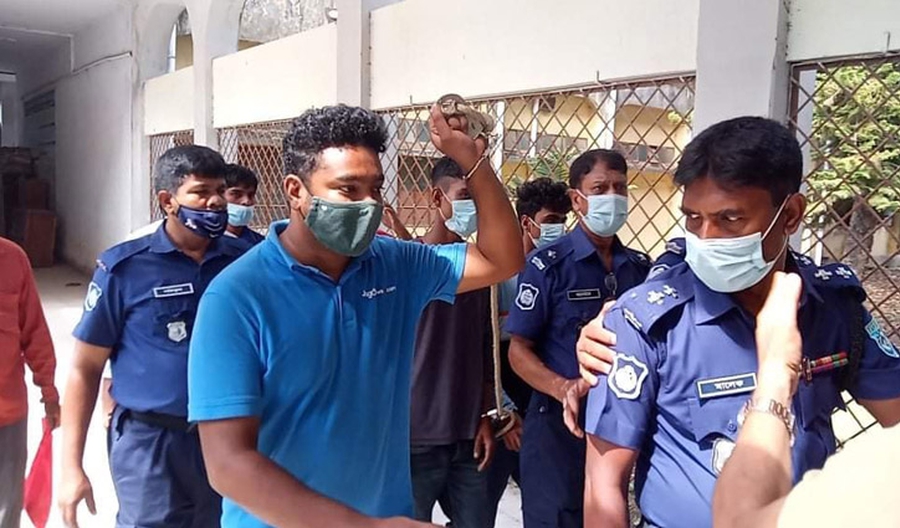 The state of civic space in Bangladesh remains ‘repressed’ based on research conducted by the CIVICUS Monitor, which tracks fundamental freedoms globally.

In recent months, there have been reports of journalists being arrested under the draconian Digital Security Act for their reporting or facing harassment and vilification. One tactic that has been increasingly exposed to silence journalists is the use of false copyright claims. New reports highlight how the Digital Security Act has been used to target journalists, cartoonists, musicians, activists, entrepreneurs, students and other critics and how Bangladesh security forces routinely carry out enforced disappearances.

The supervisor of Thakurgaon Sadar Hospital, Dr. Nadirul Aziz Chapal, filed a case with the Thakurgaon Sadar Police Station under the Digital Security Act on 10th July 2021. The hospital supervisor accused the three journalists of publishing reports in the media about the ongoing corruption related to COVID-19 patients’ meals at the hospital. The pictorial report quoted experiences of the COVID-19 patients with photos of the meals served at the hospital. It was highlighted that the hospital only spent around BDT 80 (USD 0.94) for each meal while the official allocated budget per patient was BDT 300 (USD 3.52). The reports quoted remarks by the hospital officials, including the supervisor Dr. Nadirul Aziz Chapal, who registered the complaint against the three journalists.

The police subsequently detained one of the journalists, Tanvir Hassan Tanu, who works as the district correspondent of online portal Jago News 24 Dot Com. The Thakurgaon police arrested and detained Tanvir on 10th July 2021. However, the following day the journalist’s lawyer managed to obtain bail from the Chief Judicial Magistrate’s Court, which is unprecedented for cases filed under the Digital Security Act. The case against the three journalists remains pending.

According to The International Federation of Journalists (IFJ), police arrested Md Akhtaruzzaman on 18th July under the Digital Security Act (DSA) for a Facebook post accusing a health official and his office assistant of corruption.

Akhtaruzzaman is a Bogura district correspondent for the Bengali-language daily newspaper Banijjo Pratidin and was arrested following a complaint filed by Shamima Akter at the Bogura Sadar Police Station on 17th July. The complaint was made over a Facebook post from the Facebook page Aftab Ahmed accusing Md Samir Hossain Mishu, the Bogura Sadar Upazila Health and Family Planning Officer and his office’s Head Assistant and Accountant, Shamima Akter, of embezzling money.

According to Emran Mahmud Tuhin, Bogura Police Detective Branch inspector, the Aftab Ahmed Facebook ID was operated by Akhtaruzzaman. After Akhtaruzzaman’s arrest, Sadar Upazila Family Planning Office filed against Akhtaruzzaman under the DSA, and he was sent to jail by a court on the same day.

On 5th August 2021, The Committee to Protect Journalists reported that authorities had harassed brothers and colleagues Sayful Arkane, a reporter, and Mohammad Aziz Arkane, a camera operator.

On 2nd August, the brothers, who cover Rohingya refugees for the YouTube channel of Rohingya news website The Arakan Times, participated in a meeting between Rohingya refugees, U.N. officials and officials with the office of Bangladesh’s Refugee Relief and Repatriation Commissioner in Nayapara refugee camp in Cox’s Bazar in southeast Bangladesh, to discuss changes to food ration cards following protests over the issue.

Immediately following the meeting, an officer with the Bangladesh’s Refugee Relief and Repatriation Commissioner ordered police to arrest Mohammad Aziz Arkane,. He said that a police officer grabbed him, put a hand over his mouth to prevent him from screaming, and pulled him backward but that he was able to struggle free.

Since then, he said that he and his brother have fled to separate hiding places to avoid police detection. He told CPJ that police have repeatedly called him since 2nd August and demanded his location. The police also raided the brothers’ family home in Nayapara refugee camp, interrogated their parents as to their whereabouts, and said that they were searching for them due to their journalistic activities. The authorities have since visited the house multiple times and also demanding a bribe in order not to file a criminal case against the brothers.

Pro-government entities have undertaken smear campaigns against journalists, who are based abroad, for criticising the Sheikh Hasina government.

Exiled journalist Tasneem Khalil, the Editor-in-Chief of Netra News, who has been previously targeted under the Digital Security Act by law-enforcement agencies, has been one of the prime targets in the latest case. British journalist David Bergman, who used to live and work in Bangladesh and has worked on various sociopolitical and cultural issues in the country, has been another target of the regime for his critical pieces. He is the English editor for Netra News.

Following a major investigation in August 2021 by Netra News unveiling allegations of corrupt collusion against the state minister at Bangladesh’s Ministry of Power, Energy and Mineral Resources, they claim the ruling party Awami League’s social media warriors have been flooding Twitter and Facebook with attacks on Netra News. At the centre of the attacks is an organisation run by members of the Bangladeshi prime minister’s family, the Centre for Research and Information (CRI).

As previously documented, there has been a systematic crackdown on critical media in Bangladesh under the current government. The authorities have forced all news portals to register with them, raising concerns among journalists about press freedom. Critical news websites have been blocked by the authorities and journalists are facing attacks for their reporting as well as being criminalised under the draconian Digital Security Act. Further, a new academic study has shown that most of the media outlets in Bangladesh are owned by the political affiliates.

Bangladesh governmental agencies and pro-government entities have been deploying false copyright claims to target online content critical of the government. According to the Asian Human Rights Commission (AHRC), news portals, online media channels and individuals’ social media profiles have been consistently facingcopyright disputes, leading to the removal of content that exposes corruption and is critical of the government.

In the most recent case reported on 13th August 2021, a series of false and malicious “takedown notices” was sent to YouTube immediately after Netra News - a Sweden based online investigative media outlet founded by exiled journalist Tasneem Khalil - posted a video on its channel on 10thAugust which had accompanied its investigative story detailing alleged breaches of anti-corruption laws by Nasrul Hamid Bipu, the state minister at the Ministry of Power, Energy and Mineral Resources. The notices claimed that three videos posted on the Netra News account were not produced by the news organisation but by someone else.

YouTube restored the Netra News channel after disabling it for less than 24 hours. “We have determined that the copyright takedown request we received for these [videos] was invalid,” YouTube informed Netra News, a day after the channel was disabled. Netra News was previously subjected to similar attacks which attempted to manipulate Facebook with false copyright claims.

AHRC also reported that an indigenous rights group’s website, which used to report violations committed by the security forces in the Chittagong Hill Tracts, had faced false copyright claims leading to the blocking of its web content.

A Bangla news portal Amar Desh UK, which started publishing from the United Kingdom after the Daily Amar Desh - a Dhaka based national daily - was forcibly shut down by the Bangladesh Police, has also encountered several false copyright claims. In December 2020, it received an email from its host DigitalOcean, stating that an article on the website was “the subject of a notification of claimed copyright infringement” under the US law, the Digital Millennium Copyright Act (DMCA). DigitalOcean requested Amar Desh UK to take down the offending article from its website within three days or they “may disable access” to the website.

This tactic was not limited to the media outlets established by exiled Bangladeshis. In March 2020, it was reported that Indian online portal Scroll.in was forced offline for publishing an article criticising Bangladesh Prime Minister Sheikh Hasina’s adviser Gowher Rizvi.

On 25th July 2021, Amnesty International published a new briefing, “No space for dissent” examining cases under the draconian Digital Security Act (DSA) – a law that contains overbroad and vague provisions granting the authorities extensive powers to police the online space – against ten individuals who have been subjected to a wide range of human rights violations including enforced disappearance, arbitrary detention and torture, simply for criticising powerful people on social media.

Those targeted include journalists, cartoonists, musicians, activists, entrepreneurs, students and even a farmer who cannot read or write, among others. Introduced in October 2018, the DSA is increasingly being used to stifle dissent on social media, websites and other digital platforms, with punishments that can extend to life imprisonment. The authorities have targeted critical voices under the pretext that they have made false, offensive, derogatory or defamatory statements online.

Amnesty International found a concerning pattern in which the authorities are weaponising sections 25 (Transmission, publication, etc. of offensive, false or threatening data information), 29 (Publication, transmission, etc. of defamatory information), and 31 (Offence and punishment for deteriorating law and order, etc.) of the Act to target and harass critical voices.

According to the organistaion, Bangladesh has at least 433 people imprisoned under the DSA as of July 2021, most of whom are held on allegations of publishing false and offensive information online.

Routine use of enforced disappearances by authorities

Human Rights Watch published a new report on 16th August 2021, “‘Where No Sun Can Enter’: A Decade of Enforced Disappearances in Bangladesh,” which finds that, despite credible and consistent evidence that Bangladesh security forces routinely commit enforced disappearances, the ruling Awami League has ignored calls by donor governments, the UN, human rights organisations and civil society to address the culture of impunity.

According to human rights group Odhikar, from April to June 2021, a total of five persons were allegedly disappeared after being picked up by men claiming to be or dressed as members of law enforcement agencies. Among them, one disappeared person was shown as arrested after a few days of disappearance but the whereabouts of the other four remain unknown.