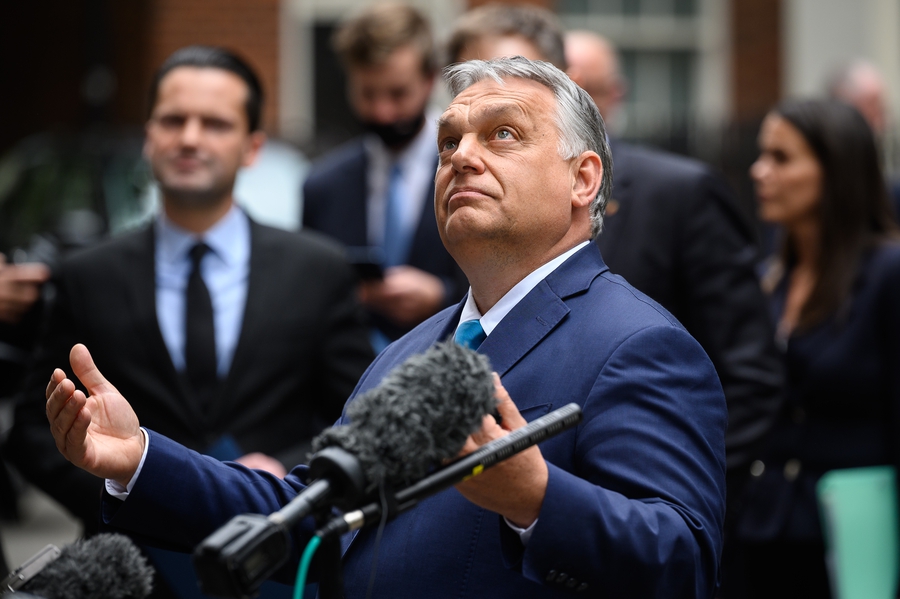 On 20th July 2021, the European Commission published its new rule of law report. The report emphasises Hungary’s lack of anti-corruption measures and warned that media freedom and pluralism remain at risk. It points out that in Hungary, "risks of clientelism, favoritism, and nepotism in high-level public administration, as well as risks arising from the link between businesses and political actors, remain unaddressed." The report also calls attention to Hungary's deficiencies in the judicial system as well as in other institutional issues relating to checks and balances.

Since there have been no improvements in Hungary’s rule of law compared to last year, the country might lose significant EU funding. In an interview, European Commissioner for Justice Didier Reynders has told hvg.hu’s EUrologus:

“The European Commission sees systemic problems with the rule of law in Hungary, including the justice system and the fight against corruption, and until Hungary makes in-depth reforms in the two relevant fields, no EU funding will arrive in Hungary.”

As its next step in a long trail of attacks against independent civil society, the Hungarian government banned anonymous donations to NGOs from 1st July 2021. However, this rule was overturned two weeks later. Theoretically, the rule still applies to donors over a sum of HUF 500, 000 (about 1,400 Euros) but thus far the government has not asked for the names of any larger donors. If the rule had remained in place, it may have intimidated donors from donating to organisations critical of the government.

A few weeks later, the Hungarian government gave up 2,3 billion Norwegian kroner (€220 million) which it was set to receive from the European Economic Area (EEA) and Norway Grants Scheme due to failure to reach an agreement over who should distribute funds to civil society. Hungarian civil society was set to receive approximately 100 million Norwegian Kroner (€9.6 million) from an independent grant operator.

In a statement, Norway's Ministry for Foreign Affairs said that:

"the donor countries have set an absolute requirement for all of the 15 beneficiary countries that the fund for civil society must be administered independently of the authorities. (…) Hungary has accepted this, but has not accepted the appointment of the best-qualified candidate for the task. We have therefore been unable to reach agreement, and under the conditions set out in the Memorandum of Understanding (MoU) we signed with Hungary in December 2020, no programmes will be implemented in Hungary under the EEA and Norway Grants scheme during that period.”

These were not the only measures during 2021 by which the government tried to intimidate civil society. As previously reported on the Monitor, the Hungarian government adopted a new law in April 2021 requiring the State Audit Office to release annual reports on the financial status of NGOs whose budgets exceed HUF 20 million. The law was created under the pretence of more transparency. According to critics, however, the law further stigmatises Hungarian civil society. The transparent operation of NGOs is already ensured under previously existing legislation.

On 24th July 2021, thousands of Hungarians joined the Pride Parade in Budapest to protest the government's anti-LGBTI rhetoric and legislation. Among the protesters were some European politicians such as Terry Reintke, MEP of the German Green party and Maria Walsh, MEP of the Irish European People’s Party. No major altercations were reported. Mira Nagy, a 16-year-old Pride attendee and member of Hungary's LGBTI community, told Euronews:

“This year is much more significant, because now there are real stakes,” she said. “Our situation is pretty bad…My plan is that if things get even worse, I will leave Hungary.”

The parade came after a law was passed by the parliament which prohibits education and advertising that is deemed to “popularise” or even depict consensual same-sex conduct or the affirming of one’s gender to children. The law, which conflates homosexuality with paedophilia, is part of an intense anti-LGBTI government campaign aimed to hold the right-wing camp together before the coming parliamentary election in 2022.

Another part of the campaign is the “national consultation” the government initiated on how to protect children from ‘homosexual propaganda’. In addition, on 30th July 2021, Hungary’s National Election Committee approved the government's request for a referendum, which is meant to protect the new anti-LGBTI legislation from “the attacks of Brussels”. The referendum is set to take place in early 2022 before the parliamentary election. Hungarians will be asked whether they support the holding of sexual orientation workshops in schools without parental consent and whether they believe that gender re-assignment should be promoted amongst children and made available to them. The questions of the referendum have been criticised as “leading”.

🔴 #HumanRights of #LGBTI persons should not be up for debate

Prime Minister Viktor Orbán has announced that a referendum will be put in place to support the new law prohibiting SOGIESC diversity content being shown to minors#Hungary #LGBTIFreedomZonehttps://t.co/dGgJjn3fhC

As a reaction to the Russian-style anti-LGBTI+ law, the European Union launched legal proceedings against Hungary's government.

We welcome the European Commission launching legal action against Hungary. LGBTQI rights are human rights; we cannot be treated as second-class citizens any longer. https://t.co/isgppXHDFT

On 3rd June 2021, the Budapest Metropolitan Court ruled in appeal proceedings that newspaper Népszava violated the Christian-conservative politician Imre Vejkey’s right to human dignity as a member of the Christian community by publishing a satirical cartoon strip. According to the ruling, the newspaper has to pay HUF 400,000 (about 1,100 Euros) compensation to Vejkey.

The cartoon, which was published on 28th April 2020, depicted Jesus on a cross with Cecilia Müller, the Chief Medical Officer at the National Centre for Public Health and member of the Government's Coronavirus Task Force, saying “His underlying condition caused addiction.” Imre Vejkey, a deputy of the Christian-conservative party KDNP and chairman of the parliamentary Justice Committee filed a complaint against the newspaper for ridiculing Jesus and violating Vejkey’s personal rights as a member of the Christian religious community. The complaint was first dismissed by the first-instance court in January 2021. However, in a second verdict the Budapest Metropolitan Court found the cartoon violated Vejkey's rights. Besides paying compensation to Vejkey, the newspaper had to pay for the costs of the proceedings and had to publish a public apology on its front page.

On 10th June 2021, staff from newspapers Magyar Hang and Direkt36 were denied access to a news conference with Prime Minister Victor Orbán, despite the journalists having registered for the event on time. It was the first in-person press conference with the Prime Minister since 2020, when the event shifted online due to the pandemic. Direkt36 journalist Zsuzsanna Wirth planned to ask critical questions on the spending of the József Antall Knowledge Center but was denied access to the conference. The news site recently published an article which highlights that Orbán’s government has supported the foundation with over HUF 4 billion in taxpayers’ money. When Orbán was asked why the journalists were not allowed inside, he simply jokingly replied that “he does not organise the press conferences.”

Critical journalists being denied entry to governmental press conferences is not a new phenomenon in Hungary. According to the human rights watchdog Hungarian Civil Liberties Union, the Hungarian independent press has been systematically obstructed by public authorities in a variety of ways for years. Ignoring journalists' questions, intimidating sources, physically restraining journalists and discrediting and stigmatising press staff are commonplace.

Viktor Orban held another of his rare press conferences today.

Direkt36 was again denied access, even though our colleague registered just like all the other participants.#PressFreedom #Hungary pic.twitter.com/ByWRNM9IeY

On 18th July 2021, the French NGO Forbidden Stories published their investigation into Israeli surveillance company NSO’s hacking spyware. The investigation revealed that amongst other countries Hungary used the spyware to spy on investigative journalists. Forensic analysis found Pegasus spyware on multiple phone devices. The Hungarian government allegedly deployed the spyware against Hungary’s last remaining independent media owners and on multiple investigative journalists. The spyware allows the user to view all content on the phone such as messages with end-to-end encryption as well as access to photographs and GPS data. NSO claims the spyware is only intended for tracking suspected criminals and terrorists.

In reaction to the Pegasus spyware scandal, the Hungarian Civil Liberties Union reported that in Hungary surveillance for national security purposes is not subject to appropriate rules and guidelines. Under Hungarian laws, the secret surveillance of citizens is legal if the secret service sees no other means to obtain the information needed to achieve their aims. There is no legislation ensuring that those practising certain professions, such as journalists, are only surveilled under strict conditions.

In response to these developments, the International Press Institute called for animmediate government inquiry into the alleged spyware attacks targeting journalists in Hungary.

“These revelations point to yet another outrageous attack on media freedom in Hungary by the government of Viktor Orbán. It is astounding that this can happen in an EU member state, as it is in breach of fundamental principles on press freedom, privacy and source protection. The EU needs to send a clear signal that this will not be tolerated. This is a direct attack on journalistic privacy and source protection, one which will have a deeply chilling effect on the entire journalistic community.,”- IPI Executive Director Barbara Trionfi.

A protest was also staged over the alleged use of NSO spyware by the Hungarian government, with protesters marching to the head office of the Fidesz party, chanting “Victator”.

Media freedom and the freedom of the press have been eroding in Hungary ever since the current government won the elections in 2010. Since then, Hungary has fallen from 23rd to 92nd in the Reporters Without Borders (RSF) World Press Freedom Index. Additionally, on 2nd July 2021, Reporters Without Borders published a list of ‘Press Freedom Predators,’ putting Orbán on its list. It’s the first time an EU leader features on the list. In response to the list, Orbán published a video on his social media mocking the list, referring to RSF as “some sort of organisation that belongs to Uncle George Soros.” In response RSF said:

"You may joke and stage a laughable response, Prime Minister, but your policy of persecuting journalism is now being taken very seriously in European capitals and elsewhere. Irony and derision will not suffice for you to make people forget the scale of the destruction of independent media in Hungary and the heavy toll it is taking on the country’s image. For the rest, I assure you that RSF is an independent organisation that will never cease, in accordance with its values, to support press freedom throughout the world,”- RSF secretary-general Christophe Deloire.

Hungary's attacks on #pressfreedom reach new level with apparent use of #Pegasus software to surveil journalists.

In new piece for IPI, @BZoldi of @direkt36 talked to leading Hungarian media professionals about the impact of the revelations.https://t.co/EIqOANMejM