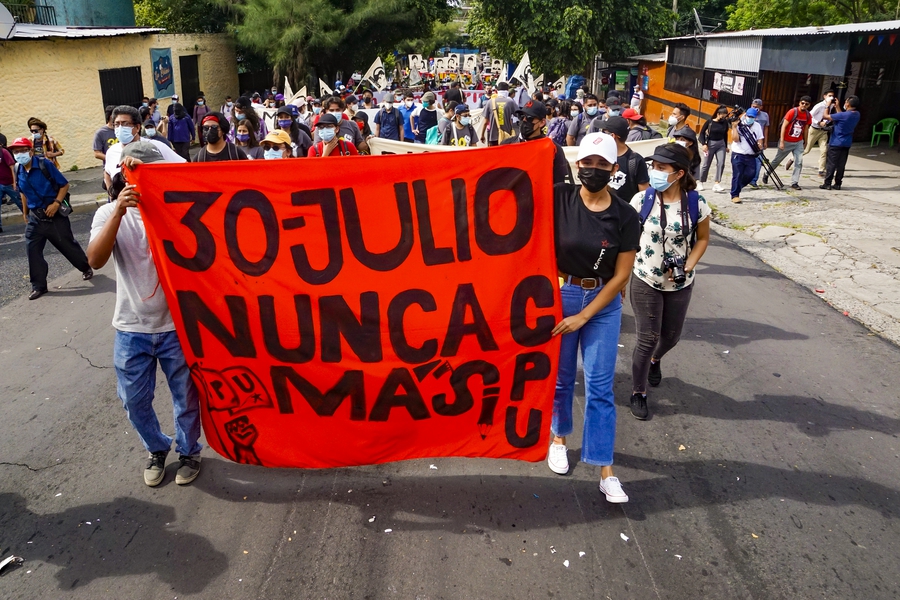 Students march to remember the massacre of students in 1975. 30 July 2021, Emerson Flores/APHOTOGRAFIA/Getty Images.

On 21st July 2021, burglars broke into the offices of civil society organisation CO-MADRES and stole sensitive documents on investigations into disappearances during El Salvador’s armed conflict. CO-MADRES, as the Comité de Madres y Familiares de Detenidos, Desaparecidos y Asesinados Políticos de El Salvador (Committee of Mothers and Relatives of the Detained, Disappeared and Politically Assassinated of El Salvador) is known, works on the search for victims of enforced disappearances and provides support to their relatives.

As reported by IM-Defensoras, in June 2021 the organisation was also dislodged from its former offices by the Federación Sindical de Trabajadores Salvadoreños (Federation of Salvadoran Workers’ Unions - FENASTRAS). The federation reportedly spread false information to evict the organisation, saying CO-MADRES had ceased to exist, and to appropriate the house where they had worked since the 1980s. FENASTRAS had nominally received the donation of the house on behalf of CO-MADRES, which at the time lacked legal personality, with the agreement to transfer the property once the organisation had received legal recognition.

On 30th July 2021, students and workers of the Universidad de El Salvador (University of El Salvador – UES) organised a demonstration in memory of the students massacred by the military for protesting in 1975. The university community marched through the main streets of San Salvador, with demonstrators carrying banners with photos of the victims, as well as posters with messages against the Nayib Bukele government. They decried Bukele’s security and socio-economic policies.

On 9th August 2021, veterans protesting against delayed pension payments organised marches in at least five Salvadoran towns. Hundreds of people joined the protests, also demanding the expansion of the membership of the Instituto de Veteranos y Ex Combatientes (Institute of Veterans and Former Combatants - INAVBE). Demonstrators blocked roads and highways in parts of the country. In San Salvador, the protesters planned to march toward the Presidential House, but were prevented from reaching the site by anti-riot police.

On 7th July 2021, a police sub inspector physically attacked journalist Jorge Beltrán Luna while he covered the emergence of a student’s body in a river at the Apopa municipality. While the reporter said he was far from the area where the body was being recovered, the police agent claimed he was interfering with police work. In a video shared by the reporter on social media, the police agent is seen slapping Beltrán Luna after the journalist argued he was not interfering with police work.

In a separate development, the president of the Inter American Press Association (IAPA), Jorge Canahuati, told Voice of America in August 2021 that “the situation in El Salvador is worrying” because it is the country with the greatest “antagonism and intimidation” of journalism and independent media in Central America’s Northern Triangle. A representative of El Salvador’s Association of Journalists (APES) added that the country’s environment for the press is worsened by the lack of constitutional guarantees and the government’s recent moves to undermine judicial independence. In the first seven months of 2021, APES registered 164 violations of press freedom.