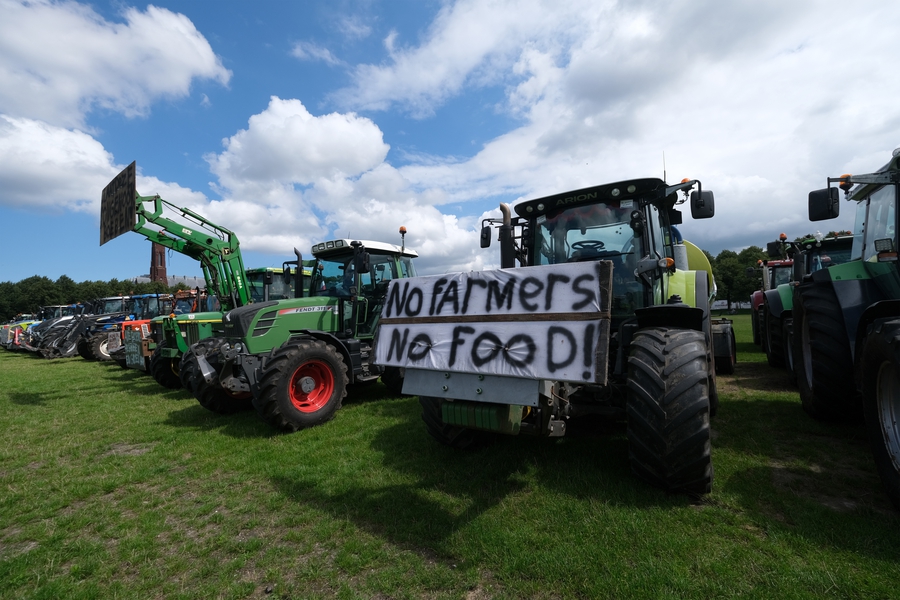 On 5th July 2021, environmental group Extinction Rebellion occupied the offices of the government pension provider ABP, located in the lobby of the Amsterdam Symphony Tower on Gustav Mahlerplein in Amsterdam's Zuidas district. The group were protesting against the pension provider's investments in fossil fuels, which currently accounts for 60 per cent of its total investments. In the last months of 2020, the institution had doubled its stake in Shell. Extinction Rebellion declared in a press release that we are already experiencing the effects of the climate crisis and that there is no more time to act against climate change. Consequently, Extinction Rebellion advocates for a stop to public investments in polluting sectors.

“The world is in a climate emergency. We owe it to ourselves and all future generations to do not just a little, but everything to ensure that the world remains liveable. For this we willingly sacrifice our freedom, for as long as it is necessary,” said Petra Verdonk, associate professor and therefore also an ABP pension participant.

Police informed the group that they were trespassing and began removing activists, who were taken away in police vans.

Earlier, on 17th June 2021, a group of pension participants affiliated with XR occupied the ABP head office in Heerlen. However, eight protesters were arrested.

On 7th July 2021, Dutch farmers organised a demonstration in The Hague to protest the government’s measures aimed at reducing nitrogen emissions caused by agriculture, which is the main sector in the country for this kind of emission. The protests came in response to the government's announcement to limit emissions from the agricultural industry to allow for an increase in emissions originating from new construction, which also releases nitrogen into the atmosphere. From this decision it has been inferred that the construction sector is more of a priority than agriculture. The government’s decision will have a massive impact for farmers considering that a report from the Netherlands' environmental assessment agency, PBL, found that stricter nitrogen and climate rules would make farming nearly impossible in some areas.

As Greenpeace points out in an article on the protest, being a farmer in the Netherlands is becoming increasingly difficult, with the number of farms in the country decreasing by 48 per cent between 2000 and 2018. This is not so surprising if one considers that 38 per cent of farming families lived below the poverty line in 2018. In the light of these considerations, Greenpeace calls on Dutch policymakers to take responsibility for creating an agricultural system that is sustainable for the planet and for the farmers.

“For years, the government has not offered farmers a fair and sustainable future with constantly changing rules and laws. Nature, the climate and the farmer are now paying the bill for this. The winners? These are the animal feed manufacturers, the fertilizer producers, the pesticide manufacturers, banks and the supermarkets.” - Hilde Anna de Vries, Greenpeace.

On 4th July 2021, people protesting against COVID-19 measures clashed with police during a reportedly unannounced demonstration in The Hague. The protest took place in various locations in the city, but the incident happened in Repelaerpark. Police report that of about 150 demonstrators gathered in Archipelbuurt, 80 of them ran into the park when they saw the police approaching. "The officers wanted to keep the group briefly in the park, pending a decision on whether or not to allow the demonstration. However, the group turned on the officers and used violence in an attempt to break out,” police said. One protester was arrested, and police did not communicate whether any demonstrators were injured in the clashes.

On 15th July 2021, investigative journalist Peter de Vries, 64, died in hospital after he was shot at least five times on 6th July 2021. The attack on the journalist took place while he was headed to a car park after leaving the nearby TV studio he cooperated with. Two suspects have been arrested in connection with his murder. De Vries worked as an adviser and confidant to the key witness in the prosecution’s case against Ridouan Taghi, the most wanted criminal in the Netherlands. In September 2019, the Dutch lawyer for a state witness in an organised crime case against Taghi was shot dead near his home in Amsterdam. De Vries had recently refused police protection after accepting it in the past due to the death threats he had received.

Many prominent figures expressed their shock and sorrow at the murder of the veteran journalist. Mark Rutte, the Dutch prime minister, declared that the murder of the journalist was “almost impossible to comprehend”. King Willem Alexander and Queen Máxima harshly condemned the attack on freedom of expression and the press, as "journalists must be free to carry out their important work without threats." EU President Ursula von der Leyen defined investigative journalists as fundamental for democracy and urged authorities to do all in their power to protect them.

Reporters without Borders (RSF) accused Europe of failing to protect its journalists, as painfully shown by de Vries’ death. The organisation also called on the Netherlands to set an example in the prosecution of those responsible for the crime. In the last four years, four journalists have been killed in Europe.

“The murder of Peter R. de Vries is the latest in a series of murders of journalists in Europe, where organised crime now represents a major danger for the media profession. The mafia-style ‘hit’ on this Dutch journalist follows three other murders in which organised crime is also suspected – those of Daphne Caruana Galizia in Malta in 2017, Jan Kuciak in Slovakia in 2018 and Giorgos Karaivaz in Greece in April of this year. We therefore urge the Netherlands, which is ranked sixth in the World Press Freedom Index, to set an example in the way it identifies and prosecutes those responsible for this murder.”- Pavol Szalai, the head of RSF’s EU and Balkans desk.

#Netherlands : After the attack on @PeterRdeV, @RSF_inter calls on the Dutch authorities to conduct a swift & thorough investigation & to protect journalists who could be targeted by organised crime to avoid a chilling effect on journalism.#peterrdevrieshttps://t.co/DFg16Zz6hN

Other incidents against journalists during the reporting period include: