Journalists come under attack during environmental rights protests and other protests 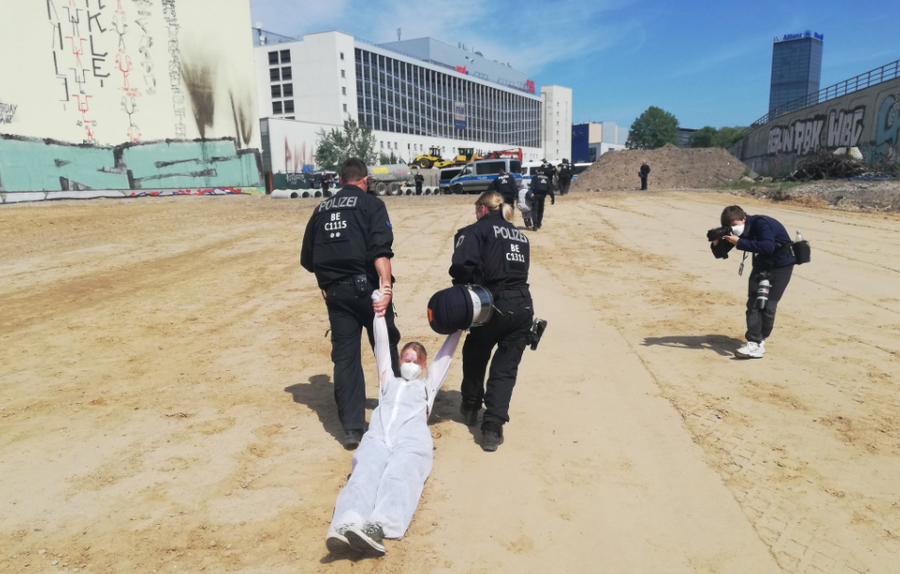 Protests against the expansion of the A100 freeway (Photo Credit: @retep_kire via Twitter).

On 5th July 2021, the English version of the study titled “Shrinking Space in Germany, Shrinking Space in Europe” by Gesellschaft für Freiheitsrechte and Open Society Foundations was published. The study highlights that restrictions on civil society organisations have reached a worrying level within the European Union and in Germany. In the latest case, one of the most problematic developments identified is when the charitable status of anti-globalisation network Attac was revoked by the Federal Fiscal Court, due to its political activity. This had a chilling effect as many German NGOs have begun self-censoring by avoiding voicing political messages as they fear facing the same consequences as Attac.

Charitable status is fundamental for civil society organisations as it implies several practical benefits, such as tax privileges, and is a pre-requisite for further funding by states or private foundations. Furthermore, the non-profit label represents a guarantee of trust and credibility vis-a-vis the public.

In addition to recognising the political role of civil society organisations within a democracy, the study recommends German authorities reform the non-profit law to include current pressing topics such as fundamental and human rights, gender justice, social justice, global climate justice and the promotion of democracy and peace. In fact, the current German non-profit law lists sports and chess, preservation of local history, local lore and local beautification among the possible missions of organisations with a charitable purpose, but it does not include much more pressing issues mentioned above.

The study also mentions the difficulties encountered by German civil society organisations in their daily work due to the lack of financial support received during the COVID-19 pandemic and a tendency by certain right-wing actors to criminalise CSOs, especially those operating in the field of migrants’ and refugees’ rights.

Job portal for COVID-19 sceptics taken down by hacktivists

COVID-19 sceptics have created an online job portal, “Impffrei work” (vaccine-free work) exclusively dedicated to people who are not vaccinated, are against the imposition of masks and are in general sceptical about the existence of COVID-19 or its sanitary consequences. Anonymous, a self-defined group of hacktivists, attacked the website with the objective of preventing the dissemination of false information concerning the pandemic and to protect other workers that potentially could get infected by unvaccinated people. Overall, vaccine scepticism has been rising in Germany lately, with anti-COVID-19 protests taking place and the spread of conspiracy theories.

Protesters carried away during blockage of large German meat producer

During 12th to 17th July 2021, the Alliance, Gemeinsam gegen die Tierindustrie (Together against the Animal Industry), organised a protest with around 150 to 200 people against the PHW group, one of the largest meat producers in Germany. For hours they blocked access to the PHW headquarters in Rechterfeld, Lower Saxony. Activists were eventually carried away by police for refusing to move their protest from the entrance of the company’s headquarters. Organiser Franziska Klein said:

“As the largest German poultry company, PHW represents the animal industry. The billions in profits of these companies are based on violence and exploitation. Today we show that we can no longer accept it. Our movement consists of climate activists, animal rights activists, labor lawyers and citizens' groups. We are determined to stand in the way of the destructive animal industry.” (translated from German)

On 5th June 2021,protests against the expansion of the A100 freeway in Berlin took place, with activists from the alliances "Sand im Getriebe", "Ende Gelände", "Fridays for Future" and "Robin Wood" occupying two construction sites on the A100. Police arrested the protesters, who are being investigated for trespassing, while others were reportedly carried away.

“Twelve journalists were partially surrounded by the police, taken into custody and received reports of trespassing and reprimanding. One colleague was even physically searched. It is simply absurd that our colleagues, who were recognisable as press representatives simply by their camera equipment and ten with the national press ID legitimized by the Conference of Interior Ministers (IMK), were prevented from exercising their profession by such means. The area on Sonnenallee was freely accessible. The police later prevented other journalists from accessing and reporting. All a clear obstruction to the freedom of the press! "

Constitutional rules on state’s protection of IT rights

On 21st July 2021, the German Federal Constitutional Court ruled on a constitutional complaint advanced by Gesellschaft für Freiheitsrechte (GFF) regarding the amendment to the Baden-Württemberg Police Act introduced in 2017 which offered a legal basis for “source telecommunications surveillance” (Quellen-TKÜ) of suspects. Since then, running electronic communications can be monitored by installing state spy software – the so-called state Trojans. The NGO argued that such use of the software is incompatible with fundamental rights and with the Constitution, as it exploits shortcomings of hardware and software without assessing their risk and without the suspect being aware of it.

To a certain extent, the Court ruling contradicts GFF's position, as it does not consider the employment of telecommunication surveillance as a breach of constitutional law. However, the decision also establishes that the state is obliged to guarantee Information Technology security and is not allowed to exploit software vulnerabilities to carry out surveillance on suspects if it is not justified. Furthermore, the police are obliged to report security gaps of software and hardware if the interest of keeping the gap open for surveillance purposes has ceased or does not prevail. Gesellschaft für Freiheitsrechte considers this decision a victory and a crucial step towards the protection of IT rights.

In its landmark decision published today, the German Constitutional Court ruled that the state is obliged to protect #IT security. #Police and #intelligence agencies are not allowed to keep #vulnerabilities secret without assessing their risks. A great success for @GFF_NGO. https://t.co/Q2N81yUTgJ pic.twitter.com/IKclB5PiFj

Erk Acarer, a Turkish journalist who is in exile in Germany, has received numerous threats during July 2021. On 7th July 2021 he was attacked and injured outside his house in Berlin. Following this, he found an egg in his garden wrapped in paper with the words “Just you wait” written on it. On Twitter, the journalist said:

“The AKP-MHP government, its gangs and the German Government, which I think have been idle in terms of measures, will be responsible for any further incidents that may happen to me.”