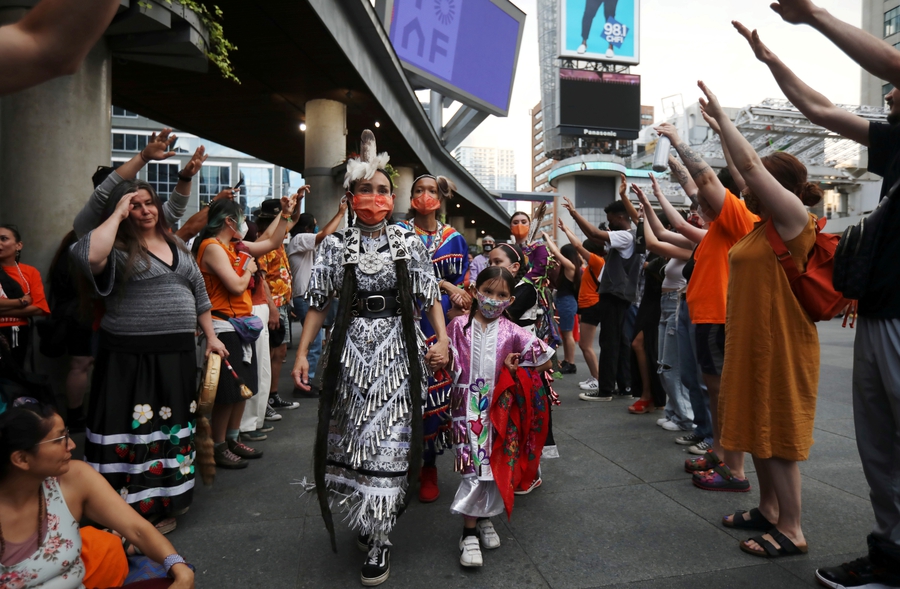 Protests against Canada Day and in solidarity with Indigenous peoples

"Instead of raising a red and white flag on Canada Day, 10 000 marched through downtown London in honour of residential school victims and survivors". #CancelCanadaDay #IdleNoMore https://t.co/2yWp7FdokK

This year’s Canada Day on 1st July 2021 was marked by vigils and protests following the recent discovery of more than 1,000 unmarked graves of Indigenous children at former residential schools. At least 150,000 Indigenous children were taken from their families to attend the schools over a century as part of the campaign to assimilate the children into Canadian society.

In Ottawa, thousands of people marched from the Indigenous Services Canada building in Gatineau to Parliament Hill to show solidarity with those communities. The “Cancel Canada Day” event was organised by the Anishnabe nation and Indigenous rights group Idle No More. In Winnipeg, protesters marched to the Manitoba legislature and toppled statues of Queen Victoria and Queen Elizabeth, symbols of colonisation. There were reports of minor clashes between people and police at one of the two protests taking place on the day. In St Johns, a demonstration organised by the Indigenous Activist Collective, Anti-Racism Coalition NL and Black Lives Matter NL was held at the Colonial Building to draw attention to the harms committed against Indigenous peoples in Canada. Robert Leamon, a Miq'maw land protector and co-founder of the Indigenous Activist Collective, told news media:

“Today is July 1, and a number of folks recognise that as Canada Day. However, we choose not to. We choose to instead gather to recognise all of the lives who have been lost due to racism, colonialism and ongoing genocide and oppression by Canada.”

Demonstration in support of Muslims in Canada

On 12th June 2021 thousands of people demonstrated in London, Ontario, in support of a Muslim family run over and killed by a truck driver in an attack the police described as a hate crime. The large crowd marched from the location where the family was struck to a nearby mosque where the attacker was arrested by police. Some carried placards with messages reading, “Hate has no home here” and “Love over hate”. The four victims were killed when Nathaniel Veltman, the driver of the truck, ran into them while they were walking near their home. A fifth family member, a nine-year-old boy, survived.

On 25th June 2021, hundreds of people attended an anti-hate rally in Edmonton to demand action to protect Muslim women. The event was held days after two separate attacks against Muslim women took place in the province of Alberta – reportedly the latest in a string of attacks. People in the crowd chanted “make our streets safe” and held signs with messages like “My hijab, my pride”. Authorities hired extra security to ensure the safety of the participants. “It's sad that we even have to have police officers and peace officers here to ensure that the people who want to speak against injustice are [protected],” one attendee said.

On 14th June 2021, a small group of protesters prevented an Israeli container ship from docking in Prince Rupert, B.C., after setting up a picket line at the port terminal’s entrance. The protesters said they wanted to block Israel from shipping goods to North America and were acting in solidarity with a movement called Block the Boat, which aims to block Israel from shipping goods to the continent as a reaction to the recent tension between Israel and Palestine. The container ship was able to dock and unload at the port in Prince Rupert two days later.

Separately, a group opposing Bill 64 protested outside the Manitoba Legislature on 17th July 2021, expressing concerns that the government’s control over school boards would mean less local input and accountability. The Education Modernisation Act would see elected school boards dissolved and replaced with a provincial education authority composed of government appointees. Critics of the bill say it will remove local voices from the decision-making process in the province’s schools, giving too much power to a centrally appointed authority with no understanding of local needs.

A Canadian Armed Forces document leaked by news media in May 2021 shows that the military gathered intelligence on individuals and groups who participated in the mass protests in Ontario in 2020 in response to the police murder of George Floyd in the USA. The military allegedly examined social media accounts to gather information on how Black Lives Matter organised, and to identify “major actors” supporting the movement. A censored section of the report was titled “Hostile Foreign Actors”. Members of the military claimed the monitoring was conducted because of the pandemic.

Decisive win @SCJOntario_en. Limitations on third party spending outside an election period have been struck down. CCLA warned @ONgov at committee law would not withstand legal challenge. This ruling restores freedom of expression and freedom of association to Ontarians. #onpoli

On 8th June 2021, an Ontario Superior Court struck down a provincial election financing law that would have limited third-party spending outside an election year. The legislation had put a cap on what interest groups that are not political parties or electoral competitors could spend on partisan or issue advertising; these third parties include many trade unions and other civil society groups. The Canadian Civil Liberties Association (CCLA) argued the legislation discouraged civic participation with unclear rules on when advocacy on issues such as climate change or labour rights would be considered regulated political speech.

In the ruling, the judge determined that several sections of the Election Finances Act infringed on rights set out in the Canadian Charter of Rights and Freedoms and are “of no force or effect.” However, the province's government vowed to override the Court's decision using the notwithstanding clause, a rarely-used power that allows the provinces to pass a law that may conflict with rights enshrined in the Canadian constitution. This decision was condemned by civil society organisations in Ontario and the CCLA said it was considering their next legal steps.

Lawmakers are considering a bill to curb online hate speech (Bill C-36) and make it easier for the victims of hate speech to launch complaints, but critics claim that it could chill free speech. The proposal would define hate speech as “content that expresses detestation or vilification of a person or group,” including over the internet. It would also revise Section 13 of the Canadian Human Rights Act to list “hate speech” as a form of discrimination. The new definition is said not to include offensive language more broadly, excluding content that hurts, humiliates or expresses dislike or disdain. Private communications are also exempt.

“This legislation gives rise to the same concerns that come up every time about freedom of expression, and is the line about what constitutes hate speech clear enough for people to know when they are crossing it or is it subjective so you don’t know if you have crossed it until it’s too late,” warned the director of the Canadian Civil Liberties Association’s Fundamental Freedoms programme. However, some anti-discrimination organisations have defended the bill, saying the proposal will make more tools available to the public to address hate speech, and that established legal precedent around hate speech would make it difficult for people to launch frivolous complaints.

In a separate development, Canada’s privacy watchdog said in a report published in June 2021 that police broke privacy laws by using facial recognition software Clearview, which they initially denied having access to. “The Royal Canadian Mounted Police contravened the federal public sector law, the Privacy Act, when it collected information from Clearview,” said Privacy commissioner Daniel Therrien in a statement. According to a Commissioner’s Office investigation, police created a three-billion-image databank by scraping social media accounts without user consent.