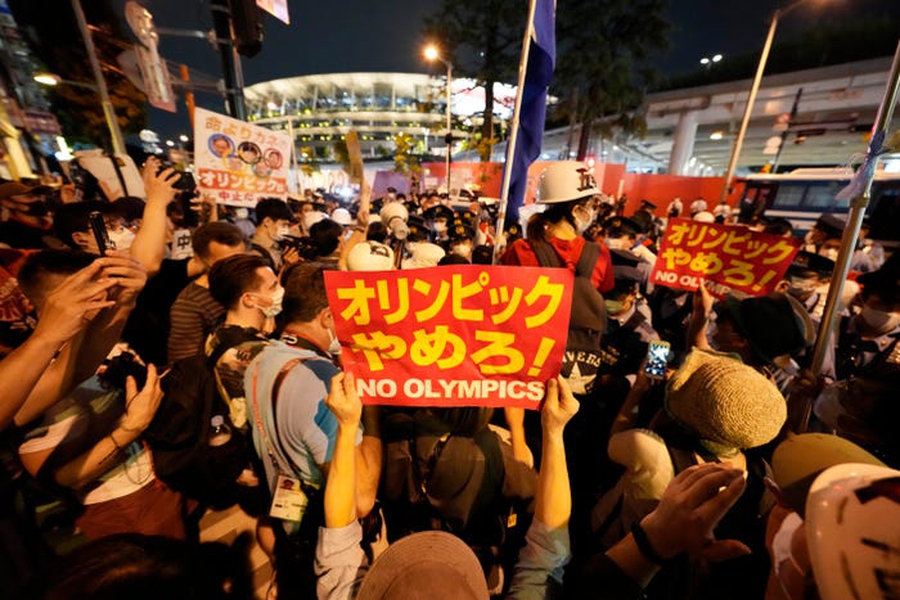 Protests that have persisted against the Olympic Games over the last year have continued around the opening ceremony. Civil society has slammed the government for shelving an anti-discrimination bill. In a positive move, the International Olympic Committee slightly relaxed its rules against protests by athletes as long as they are not disruptive.

Protests on the streets and online against Olympics

Protests against the Olympic games persisted ahead of and around the opening ceremony of the Olympic Games on 23rd July 2021.

As previously documented by the CIVICUS Monitor, activists opposed to the Tokyo 2020 Olympic and Paralympic Games said the events would hurt individuals and businesses through high costs and disruption and will provide only fleeting gains for a small number of people in the political, economic and media elite. They reported increasing human rights violations including the harassment and displacement of unhoused residents of Tokyo and increased policing, privatisation and exclusion as developments and gentrification accelerate in the surrounding areas.

There has also been anger that despite the COVID-19 situation the authorities are not prioritising public health. The number of newly reported COVID-19 cases in Tokyo exceeded 3,000 for the first time on 28th July. A recent poll conducted by Kyodo News showed that 87 percent of respondents expressed some concern about the Olympics being held, with 31 percent saying the games should be cancelled altogether.

Protest against Tokyo Games ahead of IOC vice head's arrival in Japanhttps://t.co/xrAo4lUQwt

On 14th June 2021, a day before International Olympic Committee Vice President John Coates' scheduled arrival in Japan, around 30 protesters braved the rain chanting slogans such as "We don't need the Olympics" and "Don't come, Coates" outside the building that houses the Japanese Olympic Committee's office. Posters bearing the message "Do not use health care, vaccines or tax money for the Olympics" were also raised at the rally.

A month to go before the Tokyo Olympics, local protesters are intent on postponing the games: https://t.co/V4xfqWQUW1 pic.twitter.com/2TEhz1m6Z1

Around 100 people held a protest on 23rd June 2021, a month before the opening ceremony. Arranged by a coalition of more than a dozen groups opposed to the games, the protesters met outside the tower block in the Shinjuku district of Tokyo before marching to a plaza close to the busy Shinjuku station. Police officers followed them closely.

One of the protesters, Atsuko Nagayama, who is 60 years old and lives in Saitama Prefecture told DW: "It is much too dangerous to go ahead with the games because we know that there are many variants of the coronavirus already in circulation in Tokyo. I want the government and the International Olympic Committee to come to their senses and realize the danger that we are in”.

Protests also occurred online. An analysis of social media data by The Asahi Shimbun showed that the number of tweets and retweets with hashtags opposing the Tokyo Games, including “#This is no time to stage the Olympics,” stood at more than 97,000 between 1st January and 23rd June 2021. The spread of such tweets surged in the middle ofJune, including more than 51,000 on 20th June alone.

The opening ceremony of the Olympics was met with a loud crowd of protesters in Tokyo. The protesters gathered in front of the southwestern corner of the stadium, timing their arrival to coincide with the beginning of the event. The protests were audible during quiet moments within the Olympic Stadium, with protesters chanting phrases such as "Cancel the Olympics! Stop them immediately!" and "Go to Hell IOC!"

On 23rd July 2021, it was reported that the International Olympic Committee had slightly relaxed its Rule 50, which for years had prohibited “political, religious or racial propaganda,” and issued new guidance allowing athletes more freedom to express their views on the field of play before competition as long as they are not disruptive.

This was a U-turn from a previous statement by the IOC in April 2021, to continue with the Rule 50 ban preventing athletes from protesting or demonstrating at the Tokyo 2020 Olympics. The IOC also said that slogans such as “Black Lives Matter” will not be allowed on athlete apparel at Olympic venues.

Several women's football teams — including the U.S. team before its opening match against Sweden — began their matches by taking knees in a gesture to end racism. Other teams whose players knelt included Chile, Great Britain and New Zealand.

Luciana Alvarado, an 18-year-old gymnast from Costa Rica, finished her floor routine, knelt on the sprung floor, looked to the sky and raised her fist to the air. Luciana Alvarado's poignant gesture was a clear tribute to the Black Lives Matter movement and ongoing fight against racial injustice.

On 29th May 2021, it was reported that Japan's ruling Liberal Democratic Party would not submit to parliament a cross-party bill to promote greater awareness among the public of sexual minorities in the country. The decision was made amid difficulties in reaching consensus between LDP lawmakers, with some conservative factions voicing strong objection to the bill and stalling the approval process at the party's General Council.

As previously documented, discussions on introducing anti-discrimination legislation in Japan have dragged on for years and numerous civil society groups from within and outside Japan have been campaigning for the passage of the Equality Act which would protect LGBT people from discrimination on the basis of sexual orientation and gender identity. The groups involved include the Japan Alliance for LGBT Legislation (J-ALL), an umbrella organisation of 100 LGBT groups in Japan. Others supporting the campaign include Human Rights Watch and Athlete Ally.

Amnesty International’s Asia-Pacific Director Yamini Mishra said: “This bill must not be shelved. With the Olympic Games approaching, the government can make a timely decision to champion equality and inclusion for all. This not only chimes with the spirit of the Olympic Games but would also fulfil the long-awaited aspirations of LGBTI people, their families and allies, and all those who value equality and justice in the country.

LGBT people still face discrimination at home with their families, at work, in education and access to health services. Although Japan does not legally recognise same-sex marriage at the national level, local governments, including the Shibuya and Setagaya wards of Tokyo, have taken steps to recognise same-sex partnerships. Other prefectures are taking similar measures.