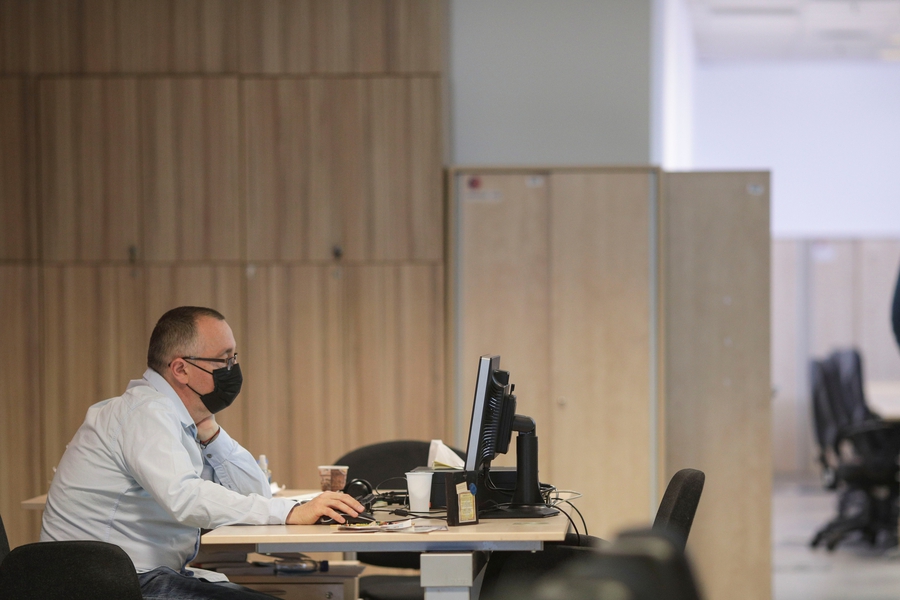 Journalists from Libertatea & Newsweek Romania were questioned over their reporting (Inquam Photos/Octav Ganea via REUTERS).

In Romania, just as in many other European countries, the decreasing number of coronavirus infections and hospitalisations led to the easing of COVID-19 related measures in late Spring, June 2021.

In an independent development, on 18th May 2021, the European Court of Justice (CJEU) cast legal doubt on a set of controversial judicial reforms introduced between 2017 and 2019. In 2017, the Social Democratic government amended the ‘justice laws’, which were initially meant to give judges and prosecutors more independence. These laws were passed in 2004, during entry negotiations with the EU as a requirement to join the bloc. One of the amendments to the ‘justice laws’ involved appointing an interim head of judicial inspection, creating an office within the Public Prosecutor’s office, which is responsible for investigating any judicial wrongdoings and thus changes the liability of judges. The amendments were passed under the guise of making the judiciary more efficient and transparent. However, without safeguards to guarantee that there is no political influence in the functioning and composition of the office, the creation of this office is deemed incompatible with EU law. The CJEU pointed out in its ruling that Romania is required to tackle corruption as agreed upon before joining the EU and meet a set of benchmarks set out by the EU to ensure it has a fair legal system.

“Romania is, therefore, required to take appropriate measures to meet the benchmarks and to refrain from implementing any measure which could jeopardize them being met,” the court said in a statement on its ruling.

In a more positive development, however, the European Commission's latest report on Romania found that the country consistently shows a renewed impetus in tackling corruption and in reversing the backsliding mentioned above. The report was issued under the so-called Cooperation and Verification Mechanism (CVM). Fulfilling the CVM’s requirement is essential for Romania's reform process and its path toward joining the Schengen group, which allows for passport-free travel within member states.

On 17th June 2021, the Foundation for the Development of Civil Society and several non-governmental organisations sent a letter to the Ministry of Justice regarding the re-organisation of the National NGO register. The letter underlines the vital importance of stakeholder involvement and expresses civil society’s wish to be part of a process that decides on matters pertaining to the functioning and organisation of the sector. The organisations reminded the Ministry about past unsolved problems (for example, the differences in understanding and functionality between the National Register and the Register of Associations and Foundations, and the practical consequences thereof).
Georgiana Gheorghe, executive director of APADOR-CH told the CIVICUS Monitor:

“The intention to significantly modify the framework for the functioning of associations and foundations deserves serious analysis and debate with the involvement of wide-scale civil society input. There are significant problems left unsolved and not seriously discussed, for example, the significant differences in understanding and functionality between the National Register and the Register for Associations and Foundations, and the practical, legal consequences thereof. We share the Ministry’s vision of a modernised and digital framework for our sector. But we can’t move forward without looking at the bigger picture and without finding the right balance between procedures for associations and foundations that are fast and easy but which also have in place sufficient guarantees against possible discretionary decisions which could silence and threaten them.”

On 1st June 2021, the European Court of Human Rights (ECtHR) ruled that Romania had failed to uphold the prohibition of discrimination when far-right groups stormed an LGBTI film screening in Bucharest in February 2013. The court found the country to be in violation of article 14, which prohibits discrimination and protects the right to respect private life and freedom of peaceful assembly. The screening of the film was part of LGBTI History Month and incited a protest by far-right supporters who shouted homophobic slurs at viewers and threatened them. During October 2014, an investigation into the incident was closed and a Bucharest prosecution body described the event as “an exchange of views.” Since none of the perpetrators has been indicted, LGBTI rights group ACCEPT and five individuals present at the screening took the case to the ECtHR, which concluded that Bucharest authorities failed to offer adequate protection and failed to investigate the real nature of the attack and therefore discriminated against the applicants based on their sexual orientation. The court ordered Romania to pay 7,500 € to the applicant association and 9,750€ to each individual applicant as well as cover their legal fees.

Since 20th May 2021, employees of the daily newspaper Libertatea and the weekly magazine Newsweek Romania have been questioned by prosecutors at the Directorate for Investigating Organised Crime and Terrorism (DIICOT) over their coverage of alleged corruption in public works contracting. The employees were questioned by prosecutors in relation to a criminal complaint that was lodged by Daniel Băluță, the mayor of District 4 in Bucharest's municipality, who was in charge of overseeing the public contract, which the outlets claimed was corrupt. Băluță accused the journalists of “organising a criminal group” in an attempt to blackmail him into changing the contract and giving it to a company that was allegedly favoured by the journalists. Both blackmail and establishing an organised criminal group are punishable by up to five years in prison in Romania.

"Romanian authorities should drop their investigation into employees of Libertatea and Newsweek Romania, and public officials should withstand scrutiny from the press rather than harass journalists for doing their jobs."@gulnozas https://t.co/BiTdkvEcHV

“It is essential for journalists to be able to freely report on the use of public funds without fear of being harassed by law enforcement agencies. Romanian authorities should drop their investigation into employees of Libertatea and Newsweek Romania, and public officials should withstand scrutiny from the press rather than harass journalists for doing their jobs,”- said Gulnoza Said, CPJ’s Europe and Central Asia program coordinator, in New York.

In an open letter, Reporters without Borders asked DIICOT to urgently issue a decision in the case and investigate whether the prosecutor in charge handled the case in accordance with the correct procedures and ethical obligations and, if needed, assign another prosecutor. Following this, DIICOT opened an investigation and it was revealed that there were links between the wife of the prosecutor prosecuting the journalists and the Bucharest district mayor who initially filed a complaint against them.

In an independent development, the Ministry of Justice did not adopt most of the proposals submitted by APADOR-CHand other non-governmental organisations, which were aimed at improving the draft law on whistleblowers’ protection. One recommendation that was adopted into the draft law was the introduction of the proportionality test of the sanction applied to the whistleblower. The proposal guarantees that disciplinary measures are proportionate to similar acts by other persons. However, other significant issues with the draft law which NGOs raised were disregarded.

As previously reported on the CIVICUS Monitor, under the current draft law, whistleblowers have an obligation to report within their institution and before the authorities first, before reaching out to the press. If the whistleblower addresses the press before this, they lose their legal protection under this law. APADOR-CH has requested that whistleblowers should be allowed to address the press directly under any circumstances. In addition, the organisation urged the Ministry of Justice to include legal aid for whistleblowers, in accordance with the requirements of the Directive. These proposals have not yet been adopted by the Government, despite them being vital for the protection of whistleblowers. Civil society pressure will continue in the autumn, once the draft law reaches Parliament.