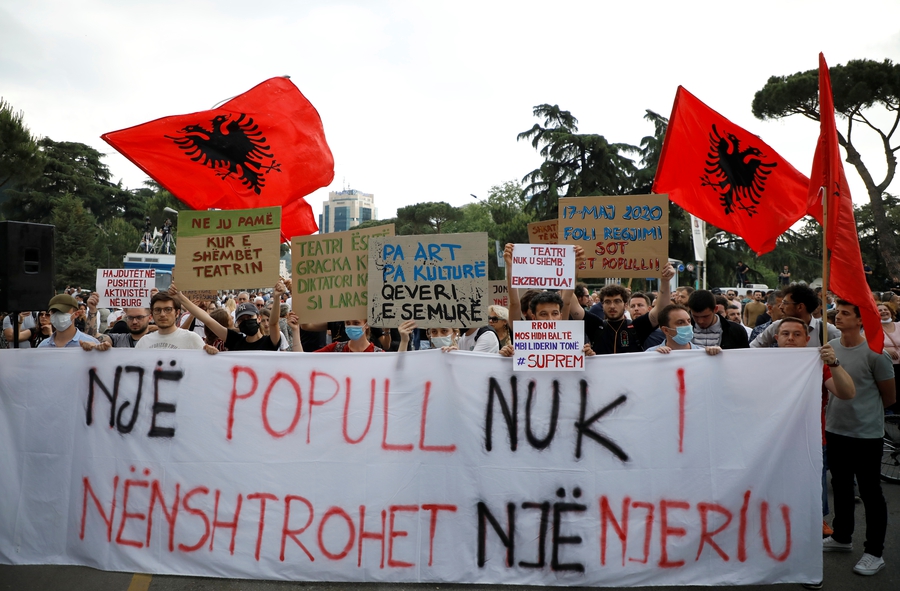 Protests staged in 2020 against the national theatre demolition (REUTERS/Florion Goga via Gallo Images).

In Albania, a new draft-law “On the Registration of Non-profit Organisations” was undertaken in 2020, in response to recommendations of the Council of Europe Committee of Experts on the Evaluation of Anti-Money Laundering Measures and the Financing of Terrorism (MONEYVAL). The Global NPO Coalition on FATF noted that the draft law has some fundamental problematic issues that may lead to restrictions on the right to establish an NPO Law. The law imposes the obligation to register on all NPOs – contrary to the international standards on freedom of association. Amnesty International has also noted the weaponisation of counter-terrorism laws in Albania to silence critics and crack down on NGOs.

Civil society in the country has followed the drafting process of the new draft law and noted that the principles and legal framework of public consultation have not been respected, and that the dialogue has not been inclusive, timely and transparent. In a public appeal, over 120 CSOs have raised concerns that the draft law seriously violates freedom of association, the principle of legal clarity, and that of proportionality of coercive measures. Moreover, the draft law creates overlap in coercive measures introduced and double reporting requirements with the existing legal framework. On 24th June 2021, during the plenary session of the Albanian Parliament, the draft law “On the Registration of NPOs” was approved, despite the objections from CSOs and their public appeal not to approve the draft law and to rather open a wide-ranging discussion in response to their requests and recommendations.

In a separate development, human rights and LGBTI rights activists have been accused of “degenerating society” after announcing that they are preparing for a long legal battle in support of a lesbian couple who wish to register as parents of two baby girls – after the authorities said only one of them could be recognised, as a single mother.

Several protests were staged during the reporting period:

In early June 2021, the Albanian government adopted several resolutions through the Council of Europe to safeguard freedom of expression, protect journalists and ensure that COVID-19 does not affect media and access to information. By adopting the resolutions, Albania has pledged to make the prevention of violence against journalists a political priority, acknowledging the serious concern over impunity for such attacks. Lastly, the Albanian government has promised to create and enact a national action plan dedicated solely to ensuring the safety of journalists, adding that civil society, academics, journalists, and professional associations will be a part of this process.

On the other hand, as mentioned above, on 2nd June 2021, the Presidency of the Assembly of Albania issued a decision stating that media employees will no longer be able to attend parliamentary sittings. Rather, they will be able to watch them via an audio-video system in a designated room. Following the concerns raised by the Union of Albanian Journalists and international journalists’ associations, as well as the staging of journalists’ protests, the Assembly issued an explanation and invited journalists to discuss the decision to ban them from the assembly hall.

#Scandal / The #Albanian #Parliament has decided that from September #Journalists will not be able to follow any activity of the parliament. they will be prepared by the Parliament itself!

Speeding up of the process to to elect board members of Albania's Audio-visual Media Authority, prior to the next parliament meeting in September 2021, has prompted concerns among opposition representatives and media workers. The decision follows the election of four members of the board of Albania’s public broadcaster, two of whom have a clear political affiliation. Reporters Without Borders publicly urgedthe Albanian Government to wait until the newly-elected Parliament is convened in September before electing new members of the Audio-Visual Media Authority.

#Albania: @RSF_inter is concerned by the risk of political takeover of the media regulator. The ruling Socialist Party should not press for election of AMA's 4 board members now, but wait for the session of the new Parliament elected in April & including also opposition parties. pic.twitter.com/eKKFUFUUhw

As reported by Mapping Media Freedom Rapid Response (MFRR), during April 2021 Albanian journalist and TV presenter Sonila Meço faced abuse and harassment online, including threats of sexual violence, after media outlets accused her of disrespecting the country’s doctors in a social media post. Meço, who presents news and current affairs show Tempora on RTV ORA, posted a comment on Facebook which criticised comments made by a single doctor about Albanian nationals stuck at the border with neighbouring Greece and not being allowed entry to the country. She was responding to the doctor, who stated that people would be “better off lying on the ground over there, than lying dead in a hospital”.

Related to media freedom, 14 partner organisations to the Council of Europe Platform protecting journalists published a report entitled “Wanted! Real action for media freedom in Europe”, which notes the killing of Albanian media owner Kastriot Reci in January 2020 under suspicious circumstances, yet to be resolved.