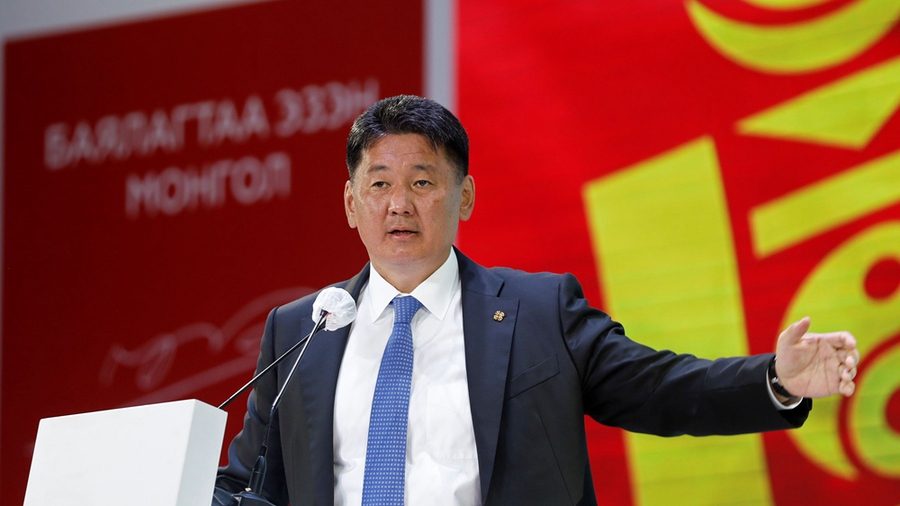 Ukhnaa Khurelsukh was elected president in the June 2021 elections

Khurelsukh, who was forced to resign as prime minister after protests in early 2021, replaces incumbent Khaltmaa Battulga, who was denied an opportunity to seek re-election following controversial changes to Mongolia’s constitution that restricted presidents to one term in office.

The amendments also weakened the power of the office to appoint members of the Judicial General Council, nominating the head of the Anti-Corruption Agency, one of three members of the National Human Rights Commission, and appointing the Judicial Disciplinary (Ethics) Committee.

Mongolia’s hybrid political system gives its elected parliament the right to appoint governments and decide policy, but the president had the power to veto legislation and hire and fire judges. Voters usually chose opposition party candidates as president.

The opposition Democratic Party's campaign slogan was "Mongolia without Dictatorship", and candidate Sodnomzundui Erdene told Reuters that an MPP victory would see the country shift further towards a one-party state.

In a positive step forward, parliament passed a new law to protect human rights defenders. While the law was welcomed, there are concerns about some provisions that could be used to restrict activism. Further, the curtailment of press freedom remains a concern.

On 1st April 2021, the Mongolian parliament adopted a new law for human rights defenders, making it the first country in Asia to provide a framework of protection for people who speak out on human rights concerns and violations. The law will enter into force on 1st July 2021.

The Law on the Legal Status of Human Rights Defenders is the result of a years-long collective effort of the Mongolian government, civil society and UN Human Rights, in cooperation with the UN presence in Mongolia. The new law means defenders in the country are now legally protected and their rights respected, promoted and fulfilled.

UN High Commissioner for Human Rights, Michelle Bachelet said: “This is a major achievement for Mongolia, signalling its clear commitment to human rights. As the first country in Asia to enact such important legislation, the law will resonate within and beyond Mongolia’s borders.”

Bachelet added that with the eyes of the region watching the next steps, it would be important that the Bill be implemented according to international standards with a genuine, independent and fully resourced mechanism.

Human rights defenders in Mongolia – while living in a relatively safe environment – have still faced numerous obstacles such as pressure, stigmatisation, and hate speech on social media. In 2019, a report from the former Special Rapporteur’s visit highlighted cases of discrimination, harassment and intimidation. Some human rights defenders were reported to have died in circumstances that had not been properly investigated.

Following the approval of the law, amendments will be made to the law on the Human Rights Commission to add a new member responsible for the matters of human rights defenders to the composition of the Human Rights Commission and establish a committee to protect human rights defenders. The committee will be made up of members chosen from existing government and non-government organisations.

However, despite this significant step, in May 2021 the Asian Forum for Human Rights and Development (FORUM-ASIA) and its member organisations in Mongolia raised concerns about vaguely-worded provisions in the law which could be used against defenders.

Shamini Darshni Kaliemuthu, Executive Director of FORUM-ASIA said: “These provisions could be misused to delegitimise the work of human rights defenders, which goes against the very essence of the law”.

Concerns about the curtailment of media

Press freedom remains an issue that concerns civil society in Mongolia. During an online discussion in May 2021, dedicated to World Press Freedom Day 2021, organised by Globe International Center (GIC) and the Mongolian National Commission for UNESCO, Naranjagral Khashkhuu, Chair of the Board at the GIC said that a 2021 survey by the Mongolian Media Council of 300 journalists found that 59 percent of them have had their press freedom curtailed due to COVID-19 regulations.

Reporters Without Borders (RSF), in April 2021, issued their 2021 global press freedom index which ranks Mongolia at 68th place. In their report RSF stated that “more than half of the defamation cases in Mongolia are brought against journalists and media outlets, pushing them to censor themselves”. While the overall environment for the media has improved in recent years, media ownership is very concentrated and most media are affiliated to political parties, which curtails the emergence of independent media. Further, the media’s ability to act as watchdogs is limited by the government’s lack of transparency and sensitivity to criticism, and by still very imperfect media legislation.