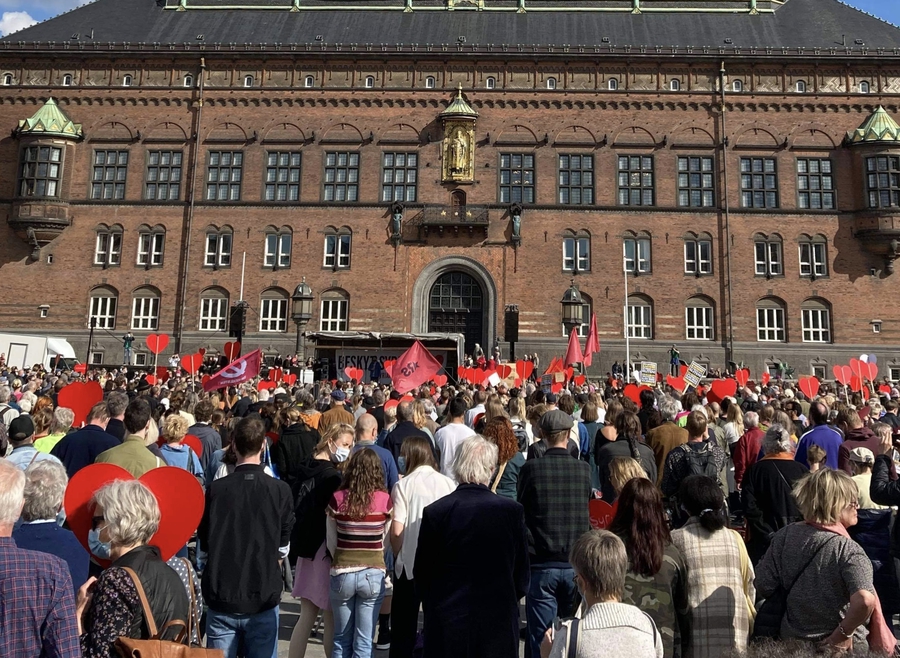 People protest against the repatriation of Syrian refugees whose permits have been revoked.

Positive development on 'Security for all Danes' bill

As reported previously on the Monitor, CSOs, including CIVICUS, have raised concerns about the introduction of the ‘Security for all Danes’ bill that will give more power to the police to take action against “insecurity-creating behaviour” and limit the right to freedom of assembly. CSO's specifically raised concerns over the proposal which makes provision for police to issue a general ban on staying in a geographically defined area for 30 days if a group of people exhibit “insecurity-creating behaviour” in the area. In a positive development on 3rd June 2021, the Folketing (Danish Parliament) adopted the government's so-called Security Package, but at the same time a majority outside the government voted against the proposal for a general ban on residence. Amnesty International, Globalt Fokus and other organisations welcomed this step.

“Today, on behalf of our rights and the fact that a majority in the Folketing listened to the criticism and voted down the government's proposal for a residence ban that could affect anyone…In recent months, we have had to admit that the government has not been as responsive as the other parties when it comes to the well-founded concerns of civil society. On the contrary, the Minister of Justice has shamefully attacked actors who have been vigilant about the Danes' freedoms”- Lisa Blinkenberg, senior adviser at Amnesty Denmark. (translated from Danish).

On 14th May 2021, a demonstration in support of Palestine took place in Copenhagen where around 4,000 people participated. The gathering was dispersed by the police due to “extensive disorder”, through the use of batons and tear gas. In fact, 50-100 people threw stones at the Israeli Embassy, police and media reported, and three people were arrested. The demonstration, called “Solidarity with Palestine” was organised to call on Danish authorities to condemn Israel for its violence against the Palestinians in the occupied territories.

Protests against the repatriation of Syrian refugees

On 21st April 2021, demonstrations took place in Denmark to protest the repatriation of Syrian refugees whose residence permits were revoked. Around 1,000 people gathered outside the Danish Parliament, and further demonstrations were organised in other places in Denmark. Demonstrators asked the Danish government to revoke the decision whereby Syrian refugees originating from the area around Damascus should be repatriated. This decision is based on the fact that according to the Danish government, since the area is under the control of the government of Bashar al-Assad, the situation does no longer justify a residence permit or the extension of the residence permit.

📢 People are protesting across #Denmark against the decision to force Syrian refugees to choose between returning to Syria or moving into prison-like deportation camps.

The Danish Refugee Council has criticised the government's decision.

"In Damascus, the Assad regime has consolidated its power now, not with bombs, but with horrific human rights violations, extremely arbitrary arrests and extensive torture laboratories. Can our Prime Minister Mette Frederiksen guarantee the lives of Syrian refugees when they cross the border when the UN and the United States cannot? "- activist Dr Haifaa Awad.

Denmark is the first EU country to revoke the asylum status of Syrian refugees.

On 25th May 2021, Extinction Rebellion Denmark staged a protest outside the Confederation of Danish Industries (which represents 18,000 companies in Denmark). During the blockade, activists sat in front of the driveway of the building’s parking garage and blocked traffic. A group of protesters tied their arms together with plaster. Police intervened in the protest and used angle grinders to cut through the plaster to remove protesters. It is reported that one protester was arrested and several others were charged. It is also reported by the group that police took down the names of protesters.