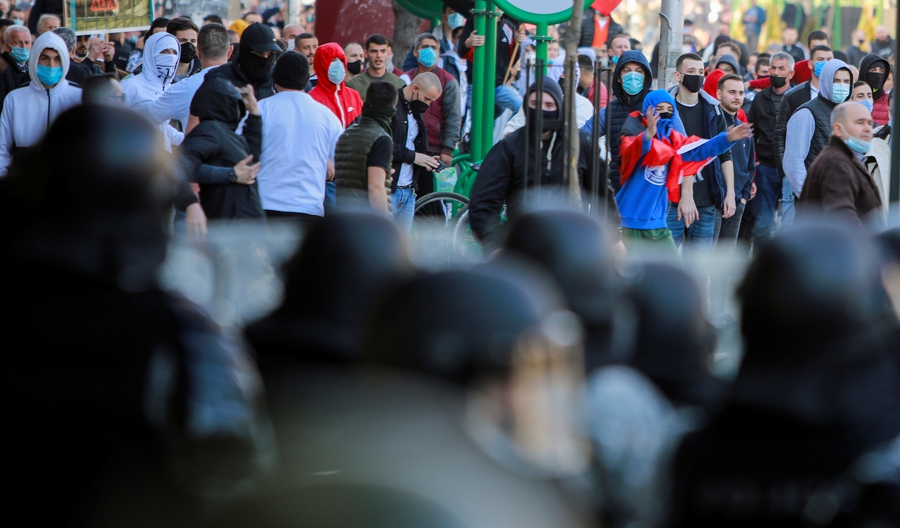 Taken at at earlier protest (REUTERS/Ognen Teofilovski via Gallo Images).

On the fourth anniversary of the events of 27th April 2017 - when a mob stormed North Macedonia’s parliament and injured many people, also known as “Bloody Thursday” - patriotic organisations from the country and the diaspora organised all-Macedonian peaceful protests. Under the slogan "Democracy in Macedonia and freedom of the defenders of the Constitution," protesters in Skopje requested that the court rulings against the participants of the 2017 event charged with terrorism be dismissed. While the opposition party supported the protests, Zijadin Sela, one of the MPs seriously injured during the events of 2017, condemned such a protest, declaring it as scandalous.

Parents from the initiative "Textbooks and classes must exist" marched through Skopje and organised peaceful protests in several cities on 15th May 2021. The initiative started collecting signatures for initiating a referendum against the adoption of the new Law on textbooks, which foresees digitalisation of education. The request did not pass with parliamentary committees due to improper documentation and, after getting legal advice, another collection of signatures for re-submission is ongoing. Media reporting around the protests focused on accusations between the ruling party and the opposition and allegations of political involvement in this civic initiative. While asserting citizens’ right to protest, the ruling party discredited the protests, claiming they were led by the opposition with the intention to block reforms in education.

A rally in solidarity with the Palestinian people was held in Skopje, protesting the ethnic cleansing of the Palestinian people by the state of Israel and the latest attacks by the Israeli authorities. The organisers called for a peaceful protest without national or religious affiliation, but were soon joined by another group of citizens with nationalist and religious symbols who began chanting. In a tense atmosphere, the police intervened and prevented larger incidents from happening, as the protesters separated.

On 14th April 2021, the Basic Civil Court in Skopje rejected the lawsuit which dealt with obstructing citizens’ right to information and for non-material damage for the fear and emotional pain suffered by Goran Trpenovski during the incidents from the Parliament rampage on 27th April 2017. According to the court, Trpenovski was not a journalist at the time because he was reporting for the online portal SDK.mk, which is not considered a medium under the Law on Media. According to the Association of Journalists of Macedonia (AJM), this ruling is problematic as it contradicts the practice of the European Court of Human Rights and discredits the journalistic profession.

“Such court rulings endanger the freedom of speech and discredit the journalistic profession as well as the role of the media in a democratic society.”

According to the Reporters without Borders (RSF) World Press Freedom Index 2021, North Macedonia has moved up two places and is now ranked 90th out of 180 countries in the world. However, the report notes that during 2020 the culture of impunity has been reinforced:

“The situation of the media worsened, senior government officials continued to threaten and insult media outlets, while cyber-harassment and verbal attacks against journalists increased on social media.”

The Association of Journalists published data according to which in 2020, 14 more serious threats to the safety of journalists were noted. More than half of these threats were against women journalists. The annual report of the Council of Europe Platform for the Protection of Journalism and the Safety of Journalists identified 201 incidents that seriously endanger press freedom, 3 of which were from North Macedonia.

Two incidents against a journalist were noted in the reporting period.

Alfa TV raised concerns after being under intense pressure due to an intrusion by the financial police who required insight into the financial operations of the television station with other legal entities and detailed insight into the television station’s operations from December 2019 to October 2020. According to the media, this is an extremely complicated process demanding a lot of time and financial resources. After several media reported on the intrusion of the financial police, the Ministry of Interior denied any physical intrusion at the TV station and dismissed any speculation that it was a matter of "systemic pressure."

With regards to changes to the legal environment, journalist associations and media unions reacted to the government’s announcement to change regulations that will end the ban on advertising by public institutions in the media, insisting this is contrary to their demands and positions.